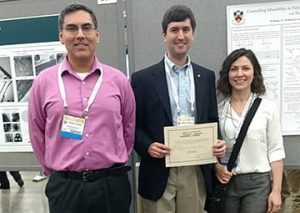 Enrique Gomez, Associate Professor at Penn State and Chair-Elect of the Division of Polymer Physics, Wiliam Mulhearn, and Jenny Mahoney, Editor-in-Chief of the Journal of Polymer Science Part B: Polymer Physics 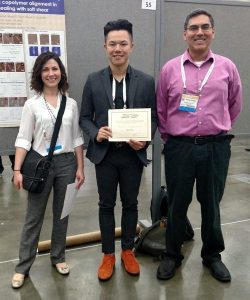 First place went to William Mulhearn of Princeton University for his poster entitled “Controlling Miscibility in Polyethylene-Polynorbornene Block Copolymers via Side-Group Chemistry”. William’s poster described the synthesis and properties of block copolymers containing both a crystallizable block and an amorphous block. Specifically, William investigated a series of low- and high-Tg polymers based on substituted norbornene monomers in order to develop a set of mixing rules that predict the solubility of substituted polynorbornenes depending on their side-groups.

Second place went to Zhe Qiang of the University of Akron for his poster entitled “Simple, generalizable route to highly aligned block copolymer thin films”. Zhe studied the macroscopic alignment of block copolymer domains in thin films. Using properties such as solvent quality, drying rate, and degree of segregation of the block copolymer, Zhe created a generalized method to achieve block copolymer alignment and a potential route for the generation of complex hierarchical assembled structures. 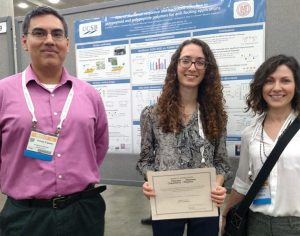 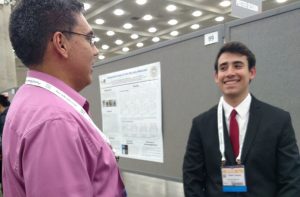 This year a fourth place prize was given to Daniel Kozuch, an undergraduate student from Penn State, for his poster entitled “Predicting χ for polymers with stiffness mismatch from simulations”. Daniel performed molecular dynamics simulations on polymer blends and block copolymers to examine the Flory-Huggins parameter, χ, for polymers with chemically similar monomers that have differing stiffness. The calculated values were found to be consistent with experimental data.

Congratulations to the winners, William, Zhe, Anastasia, and Daniel!