At the 2014 ACS Fall meeting in San Francisco, Brent Sumerlin receives the Journal of Polymer Science Innovation Award and a symposium in his honor 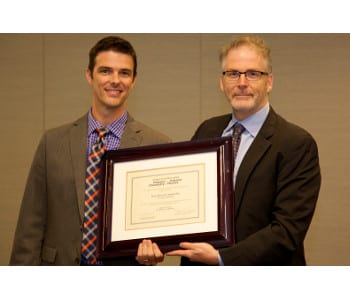 From his undergraduate days at North Carolina State University, through graduate school at the University of Southern Mississippi, a postdoc at Carnegie Mellon University, a professorship at Southern Methodist University, and finally his current position at the University of Florida, Brent Sumerlin’s innovation in polymer science has made its mark and touched the lives of a number of researchers. At the recent ACS Fall Meeting in San Francisco, California, Brent’s colleagues, former advisors, professors, and friends paid tribute to his research career as he received the 2014 Journal of Polymer Science Innovation Award.

The Innovation Award was established in 2012 by the Journal of Polymer Science: Polymer Chemistry and the Journal of Polymer Science: Polymer Physics to celebrate significant research innovation and achievement in a polymer scientist under the age of 40. Brent’s work was recognized with a symposium in association with the Polymeric Materials: Science and Engineering (PMSE) Division of the ACS. The symposium included a stellar lineup of talks from prominent polymer scientists who influenced Brent during his career, including Kenneth Wagener (University of Florida), Nicolay Tsarevsky (Southern Methodist University), Patrick Theato (Universität Hamburg), Rigoberto Advincula (Case Western), Charles McCormick (University of Southern Mississippi), Marek Urban (Clemson University), and Krzysztof Matyjaszewski (Carnegie Mellon). 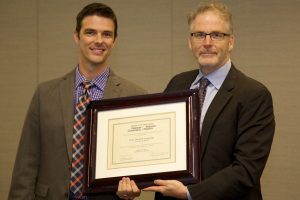 Brent’s research is primarily focused on three main areas, combining both fundamental and applied science toward the treatment of disease. First, he takes advantage of “click-chemistry” techniques to synthesize and functionalize complex polymers. The second area explores the self-assembly of stimuli-responsive block copolymers. Rather than focusing on the more commonly studied pH, light, and temperature stimuli, Brent investigates the effect of small molecules on polymer response. The ability to detect changes in the concentration of sugars gives his block copolymer micelles a clear advantage in the delivery of insulin during diabetes treatment. Finally, his innovative work on “smart” polymer-protein conjugates under conditions that prevent denaturation allow for new applications in controlled drug delivery and enzyme catalysis. The modification of biomacromolecules with synthetic polymers increases efficacy for many in vitro and in vivo applications.

Ending the symposium on the central theme of stimuli-responsive, “smart” polymers, Brent’s talk explored the area of dynamic-covalent materials, highlighting the reversibility of bonds in the polymer matrix and the creation of materials with intrinsic self-healing behavior.

Congratulations to Brent on a well-deserved award!