An active polymer skin that can be be reshaped on-demand takes existing technologies and adapts their functionalities to the needs of a changing environment. 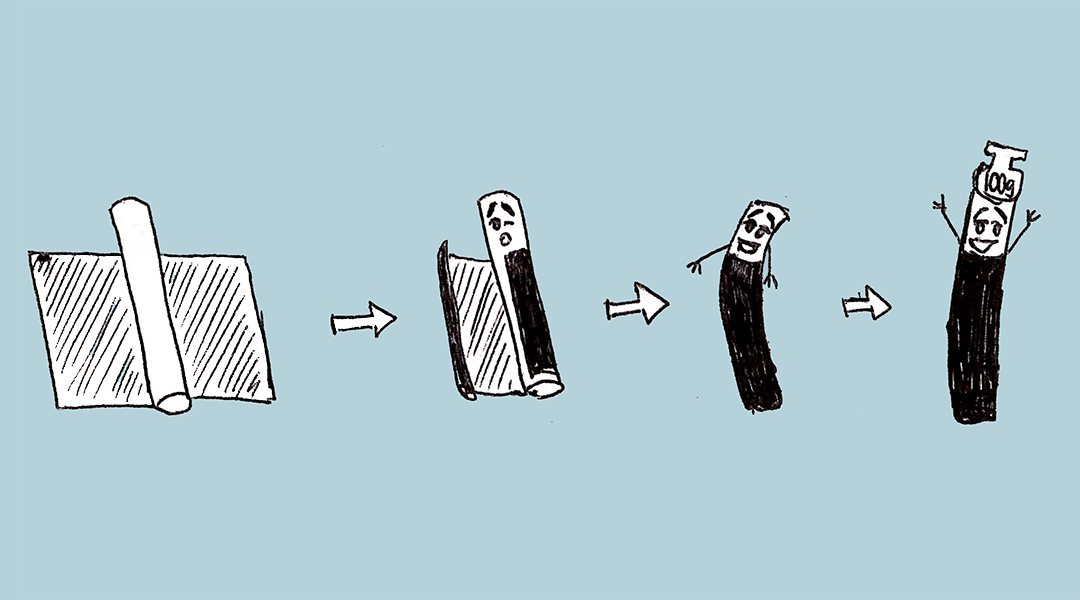 If you are someone who enjoys cooking, you might know that a touch of cornstarch and water can make your sauces delightfully thick and gloopy. If while eating your meals you enjoy watching science videos, you might also know that people have been able to run across whole pools of cornstarch and water without sinking to the bottom. And at this point — having stuffed yourself full of protein and watched enough videos to be legitimately worried about your “YouTube Recommended” — you don’t need a third hobby to recognize there might be something special about the combination of these two ingredients.

What you may have noticed is that cornstarch mixed with water is a non-Newtonian fluid. What this means is that it changes thickness (more accurately, viscosity) in response to stress. When touched gently, it treats you in kind, but when punched with effort it will thicken or even solidify, leaving you wincing in pain. In contrast, the thickness of a Newtonian fluid, like water, remains unchanged in both cases (punching or caressing). When non-Newtonian fluids thicken to the extent that they behave like a solid, they exhibit a behavior called jamming — a phenomenon typically only present in non-Newtonian suspensions of solid particles in liquid; like cornstarch particles in water.

Interestingly, suspensions of solid particles in fluid aren’t the only state of matter that can jam; solids can jam as well. I know this sounds rather counterintuitive — aren’t solids solid-like already? How can they exhibit jamming?

There are, in fact, many different jamming solids. The type most similar to cornstarch and water includes solids that are made up of granular materials, which are made up of a collection of grains like bean bags scattered strategically around elementary school libraries in the hopes of getting young children to read. These granular systems exhibit fluid-like behaviour when the grains slide over one another and solid-like behaviour when the grains are packed together. When the grains get too close to one another, they exhibit too much interparticle friction to slip and flow.

You can control this slipping behavior by removing the air from the system. If you decide, for example, to vacuum the air out of a bean bag while taking care not to remove any of the beads, then the bean bag is going to be locked into shape and sitting on it won’t feel particularly pleasant. If you then release the vacuum and let the air rush back in, the bean bag would become malleable again, and you can sit back down with your copy of The Very Hungry Caterpillar without worrying about how sore you will get.

More recently, researchers have been interested in creating thin jamming skins. Instead of grains, these skins are made up of 2D materials — like sheets of paper —that are stacked together. After placing the stack within a membrane, they finally apply a vacuum.

These materials have already had some success in systems like robotic grippers: robotic grippers that jam change shape relatively easily, conforming to the shape of the object they are about to pick up. Once they are in the desired shape, the robot handler can apply a vacuum to the gripper, locking it in place. This way it is able to grasp the object and keep holding onto it while lifting it up. Unfortunately, many of these systems are unable to stretch or could only stretch in one direction, which seriously limits their ability to make complicated shapes or conform to curvy surfaces.

Widening this range of applications is what a team of researchers at Yale University, led by Dylan Shah and Professor Kramer-Bottiglio, sought to accomplish.

According to Shah, “traditional layer-jamming devices could only bend around one axis, which restricts what shapes they can attain.” Shah suggests an intuitive way to visualize this limitation — by considering your holiday gift-wrapping struggles.

“The wrapping paper is easy to fold, one edge at a time, around rectangular boxes, but the paper always crumples in a disordered, unpredictable fashion around most other shapes, such as a child’s stuffed animal, a dog-bowl, or a toy car,” Shah stated, adding: “It’s also why nobody attempts to gift-wrap a bicycle.”

To make these jamming skins more universally “wrappable”, Shah and his collaborators created layer jamming skins that can stretch in two dimensions. The layers are flexible enough to be applied and reapplied dozens of times without breaking, can be jammed within four seconds, and can even be repurposed for additional tasks after the original tasks are completed.

The skins are made out of hexagonal shapes cut from polyethylene terephthalate (PET) connected using springs also made out of PET. Skins made of other shapes were tested as well, but this design was found to yield the highest stiffness ratio.

The skins are then placed atop one another and it is the resultant friction between each layer that causes jamming behavior. The degree of friction depends on three variables: the applied vacuum pressure, the area of overlap between skins, and that friction coefficient μ, which you might remember from your introductory physics class as a constraint on blocks slipping down inclined planes.

In order to enhance the jamming effect, all you have to do is increase the vacuum strength or maximize overlapping area between skins. The friction coefficient is a property intrinsic to a material, so when it comes to μ, there’s not much effect on jamming unless you replace the PET plastic with a different material altogether.

Once they created this hexagonal shape, the researchers identified points at which jamming would occur in the composite skin. These points represented the vertices of the triangles created by overlapping hexagons (image right). The researchers assigned each vertex of a triangle to one of three layers and used complex modelling to find the optimal geometric configuration which would result in no waste and maximize jamming characteristics.

Multiple such layers were then stacked together and sealed inside a stretchable silicone membrane so that each membrane contained 12 layers of the PET hexagons.

A variety of applications

If you were marooned on a deserted island with only your wits and one item of your choosing, what would that be?

This question has never made sense to me — how could you prepare for being stranded? — but it seems to be a particularly popular ice breaker question because it has somehow lodged itself in my mind and laid dormant for years so that when reading this paper I was abruptly reminded of it.

The list of applications offered by the authors starts modestly. First they show that the jamming skin can be physically rolled into a cylinder that can bear a load under vacuum. Next they explain that the jamming skin can be shaped (and then solidified by vacuum) into a concave liquid-carrying vessel or, in other words, a bowl you could use to carry water from an island river to your lonely campsite (as the authors start listing a variety of common household items, I became increasingly convinced that ice breaker events at Yale most certainly include a discussion of what to bring to a deserted island when you are stranded).

The jamming skin could become a shovel — ideal for giving a proper burial to your dead mate who washed ashore after you. The jamming skin could be used as a shelter for delicate objects, like the eggs you stole from a bird’s nest to make dinner for one. It could serve as a tool holder to carry the bow and arrows you fashioned out of wood, or even turn into a book stand to hold the sheets of your upcoming novel, which you hope might outsell Hatchet — if only you could just figure out how to get home!

To demonstrate that their creation could do all of that and much more, the authors placed the jamming skin on top of other objects on a vacuum table. When they turned on the vacuum, the skins would be pulled down onto the objects and be forced to conform to their shape. The jamming skins were successfully able to wrap themselves around a 3D-printed model of a face, an artificial piece of fruit, and a tape measure. They remained intact in the process, demonstrating great flexibility and strength. Most importantly, the jamming skins could be reshaped into many different configurations, and despite undergoing this procedure dozens of times, they did not break.

Jamming skins also have applications in robotic arms. Roboticists often take inspiration from nature and so did the authors of this study. They looked at instances of solid materials in nature that demonstrate variable stiffness, which means they can switch pretty easily between two states: soft and hard.

It turns out that variable-stiffness materials are actually pretty common in nature. When elephants grasp objects with their trunk, they are able to stiffen what is otherwise a rather soft appendage. Likewise, octopuses can artificially induce temporary joints — virtual joints — in their limbs. With jamming skins, researchers were able to create “robotic continuum arms”, similar to the octopus limbs, where on-demand joints were produced wherever needed in the robotic arm. The authors tested this by wrapping the jamming skins around a foam cylinder and bending it in different directions.

The ability to create virtual joints in appendages is also quite useful for creating exoskeletons. As an exoskeleton, the jamming skin would serve as a soft outer layer that can be worn around an arm that needs to carry additional loads. It would conform to the curves of an arm, and would bend around the joints. In fact, the authors suggest it could provide joint support for rehabilitation.

While the jamming skins in and of themselves already seem remarkably nifty, the authors then go on to discuss ways in which these jamming skins could be used in technologies of the future. The researchers suggest they could be integrated into smart clothing that could be used to assist and rehabilitate. They prudently forego mentioning the scenario of being stranded on a desert island and discuss the far more elevating experience of being an astronaut in space, where they could get the jamming skins to morph into tools they might need when exploring uncharted territories, and which could then double as a brace for support once the astronaut becomes exhausted.

There is a lot jamming skins can do. If we sat down and tried to list out all possible objects they could morph into we would be here for a day. Still, in the end what I personally think is most inspiring about this paper is not the number of applications it presents but how the skins change our way of looking at the world.

Rather than encouraging us to swap out old technologies for the new, the researchers at Yale have presented a way of taking existing objects and adapting their functionalities. Rather than replacing our present technologies, we can simply tailor in real-time what we have already to the needs of a changing environment.

To read more articles by Medha, check out her blog Soft Materials, Hard Science, which is dedicated to reporting advances in applied soft materials for general audiences via a mix of science reporting and sci-fi.