This month, NASA's James Webb Telescope captured images of the Pillars of Creation in breathtaking detail. 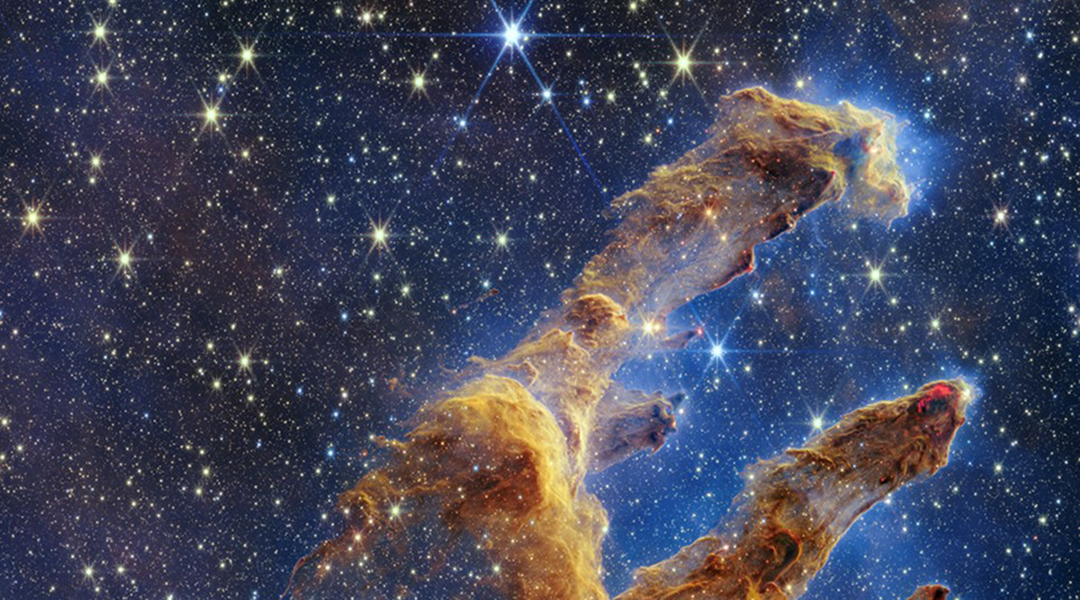 The image of the Pillars of Creation is one of the most iconic photographs taken during the 20th century. The Pillars, first imaged by NASA’s Hubble Space Telescope in 1995, are located in the Eagle Nebula in the Sagittarius Arm of the Milky Way Galaxy, which is about 6,500 – 7,000 light-years from Earth.

These three pillars, each of which is several light-years long, are named because new stars are constantly being created from the interstellar gas and dust of which they are composed. Other pillars of this type, referred to as “elephant trunks”, exist elsewhere in the Universe but the Pillars of Creation are closest to the Earth, allowing astronomers to study them in great detail.

The original 1995 image was taken using a telescope that operated in the visible light range, which is limiting because visible light does not pass freely through the dust constituting the pillars, leaving astronomers to guess at what was going on inside. In order to better study their structure and the processes occurring within, in 2010 physicists used the ESA Herschel Space Observatory, operating using infrared radiation for which the pillars are almost transparent. This study allowed them to observe the newborn stars, which confirmed their hypothesis and justified the pillars’ name.

However, researchers still required more detail to better understand the types of stars that exist in this region of space in order to improve current models of star formation, life cycles, and death.

This month, astronomers put the newly launched James Webb Space Telescope (JWST) to task. Webb operates in the infrared range of the electromagnetic spectrum and possesses significantly higher resolution compared to the Hubble or Herschel Telescopes as a result of its large, 6.5 m diameter mirror —  compared to 3.5 m for Herschel and 2.4 m for Hubble. This allowed it to take the most detailed image ever of the Pillars.

One intriguing feature visible in the newly published image shown above are the bright red lines found at the edges of the Pillars. This is matter “spit out” by stars within the Pillars that are in the process of forming from the surrounding gas and dust. Newborn stars — which are only a few hundred thousand years old — periodically shoot out supersonic jets that collide with clouds of matter. These collisions give rise to shock waves and high-energy hydrogen molecules. They generate a crimson glow, most clearly visible in the second and third columns in the image.

Another interesting aspect of the JWST images is the fact that the Pillars captured in them may no longer exist. The Spitzer Space Telescope, which was active from 2003 to 2020, observed a dust cloud in the vicinity of the Pillars, which some scientists think was a shock wave produced by a supernova explosion. If so, the cloud’s appearance would indicate that the Pillars were destroyed by an explosion about 6,000 years ago, but since light travels at a finite speed, this destruction should be visible from Earth in about 1,000 years. However, other astronomers disagree with this theory, arguing that the supernova should have resulted in a slightly different emission spectrum than the one observed in the dust cloud and that the Pillars still exist.

Getting an enormously detailed image of the Pillars of Creation is not the first and, hopefully, not the last achievement of the James Webb Space Telescope. In the few months that have passed since its launch, it has been used to observe the most distant galaxies ever found, regions of young stars formation, water vapor in the atmosphere of Jupiter, among many other fascinating discoveries.

Future missions will aim to study the early Universe, the atmosphere of exoplanets in far-away star systems, the formation of interstellar clouds of gas, plasma and dust — all in all allowing us to gain a deeper understanding of the Universe and our place in it.

Cosmic bursts unveil universe's missing matter
The true colors of stars
Physicists identify a quantum membrane in merging black holes
Seeking life on Mars: What you need to know about the Perseverance mission