Is there enough platinum to run a solar-powered hydrogen economy?

In his latest piece, Professor Ozin considers the possibility of basing a future hydrogen economy on platinum catalysts. 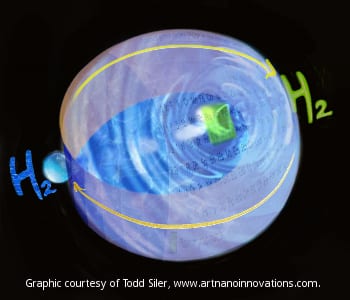 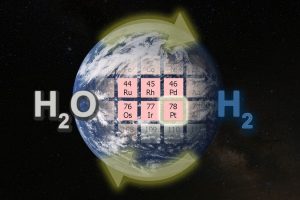 Let’s not yet write off rare expensive Pt as the catalytic metal of choice for making solar H2 on an industrially significant scale to power a global hydrogen economy. Graphic courtesy of Chenxi Qian.

Hydrogen as a clean energy source for fuel cells in the transportation and power generation sectors, as well as an effective reducing agent for transforming carbon dioxide to value-added chemicals and fuels, could solve some of the adverse consequences of burning fossil fuels that release greenhouse gas into the atmosphere and chemicals that pollute the environment [1, 2].

The practical realization of the full environmental and security benefits of clean and renewable hydrogen for use in fuel cells and conversion of carbon dioxide to chemicals and fuels, will necessitate the development of large-scale, low-cost hydrogen generation methods from renewable resources with a minimal carbon footprint. Amongst the different options for generating hydrogen, the photo-electrochemical approach, which utilizes sunlight to directly split water is considered to be amongst the most promising technologically and economically. Nevertheless, efficiency, figures-of-merit and longevity issues, requiring basic-directed research to improve loss mechanisms and increase electrodes, materials and device performance and stability, ultimately to develop operationally safe systems, remain the most challenging and critically important issues to enable advances in the field [3].

Photo-electrochemistry is an electrochemical technique, which employs light harvesting catalysts most often based on specialized semiconductor and metal nanostructures and combinations thereof. It is a truism that many research scientists, who recognize the axiom of the ‘materials dilemma’, remain skeptical of finding a practical and efficient photo-catalyst that can enable the light-assisted electrochemical H2 evolution reaction from H2O at a sufficiently large scale to facilitate a TW H2 economy.

This refers to the challenge often confronted by scientists, engineers, industry and manufacturers trying to discover champion materials for a large scale catalytic process, where the best performers are comprised of elemental compositions in short supply and too pricey while inferior performers consist of earth abundant low cost elemental compositions. This is certainly true for the catalytically active platinum group metals Ru, Os, Rh, Ir, Pd and Pt in nanostructured forms as well as the catalytic sites of diverse classes of molecules, clusters, polymers and materials.

In the case of the photo-electrochemical H2 evolution reaction from aqueous phase H2O, the champion catalyst remains Pt despite much research devoted to find a more abundant cheaper alternative. This is simply because Pt as a H2 evolution catalyst still has the world-record exchange current density and low Tafel slope. Moreover, Pt is reported to be more durable in acidic environments, which is the common case in photo-electrochemical devices. This illustrates the difficult choice one has to make in translating solar fuels materials science to a technology that could be implemented on a large scale. Should one continue to focus attention on bringing down the cost of rare and expensive superior performance materials like Pt or devote time and effort to improving the poorer performance of common cheap materials?

It turns out not surprisingly that the efficiency of the H2 evolution reaction sensitively depends on the loading and size of the nanostructured Pt catalyst integrated with the photon harvesting, electron transporting photocathode. In this context, it is pertinent that a recent study has quantified how much Pt is actually required to optimise the H2 evolution rate in a photo-electrochemistry experiment using an exceptionally well-defined Pt-TiO2-Ti-pn+Si composite photocathode [4].

In this experiment, the size and loading of Pt nanoparticles were controlled using a sophisticated supersonic molecular beam source that was able to deposit mass-selected Pt nanoparticles from the gas-phase, with retention of their size, onto the photocathode. From detailed materials characterization measurements and in depth photo-electrochemistry experiments, it was found that the size of the most active Pt nanoparticles for the H2 evolution reaction was 5 nm at a loading level of 100 ng/cm2 on the photocathode. For a state-of-the-art over-potential of 50 mV this translated to about 54 tons of Pt in order to create a TW scale photo-electrochemical H2 generation infrastructure. How often this 54 tons have to be replaced is a crucial question. The issue of a well-designed Pt recycling system is clearly advisable. This tonnage amounts to around 30% of the current global annual production of Pt most of which is currently used in automobile catalytic converters and jewellery.

In terms of known Pt mineral resources (earth abundance 3.7×10-6 %) this does not seem like an insurmountable obstacle if it was decided by policy makers, the renewable energy industry and process engineers to establish an economically and environmentally viable TW H2 clean and green global technology founded upon the photo-electrochemical splitting of H2O using Pt as the metal of choice.

It is pertinent to note that it may prove possible to reduce this amount of Pt by many orders of magnitude if the size of the Pt nanoparticles could be reduced from 5 nm to the atomically dispersed state and the catalytic activity for the H2 evolution reaction maintained if not improved [5]. Encouragingly in this context, a recent report revealed that the readily accessible, nanoporous layered material carbon nitride (C3N4), can anchor individual Pd atoms at the N sites and is able to function as a thermally stable hydrogenation catalyst for the production of many organic substances [6]. If this breakthrough can be extended to Pt atoms on C3N4-based photocathodes, this has the potential to reduce the Pt catalyst tonnage requirement by orders of magnitude.

For photo-electrochemical hydrogen generating systems, besides the availability and cost of Pt, techno-economic challenges will also be encountered by constraining the area for water splitting to that of the light harvesting units and the area and cost of required land. The overall cost analysis of this kind of integrated photo-electrochemistry system will have to be compared with the cost efficiency of competing hydrogen producing technologies that employ Pt electro-catalysts based upon electrically integrated photovoltaic-electrolysis systems and grid integration of decoupled photovoltaics and electrolysis systems [7].

It is worth noting that the production of Pt since the early 2000s has varied between just over 150 tons to about 220 tons. Obviously there is scope for further production if necessary. The price has been volatile. It was stable from 1992 to 2000 and then steadily rose until it touched about $2,252 per ounce in 2008. It then fell off a cliff later in 2008 falling to $774 per ounce. It has since gone up and down, as high as $1,900 per ounce and today stands at about $950 per ounce [8]. The price of Pt seems to be related to the fortunes of the economy, when the economy is good and growing so does the price of Pt. A big question is, do we want to base a H2 economy on a rare element like Pt, where countries could be held to ransom on either the price or supply rather like the current situation with oil?

Perhaps, when more research scientists challenge the doctrine of the ‘materials dilemma’ by using new value propositions with economic models for producing Pt, they may entice business and industry leaders to produce Pt as if it were a ‘common element’, one that was absolutely essential for creating a sustainable future.

Currently, fossil fuel industry methods remain economically advantageous, despite the adverse consequences on our environment and climate. A transition to clean energy technologies will take time, nevertheless many companies have already realized the benefits of this ground-breaking change. An impressive example of the conversion from fossil to H2 fuel is seen with Toyota. After more than twenty years of rigorous research and development they have manufactured automobiles with H2 fuel-cell powered engines to become commercially available later this year [9]. To enable this transition, H2 fuel stations as well as H2 generators integrated into automobiles will have to be rapidly developed.

It seems that we should not yet write off rare expensive Pt as the catalytic metal of choice for making solar H2 on an industrially significant scale to power a global hydrogen economy. If Pt is selected as the catalyst of choice, there should as well be alternative choices of cheap and abundant elemental compositions, which can quickly take the place of Pt as a photo-catalyst. We shouldn’t stop looking for cheaper alternatives as there’s a whole bunch of interesting alternative materials out there.

To invoke the wisdom of the American novelist, Mark Twain: “It ain’t what you don’t know that gets you into trouble. It’s what you’re sure you know that does.”

If we’re so sure that Pt is too rare and expensive to process on a global industrial scale, we may be adding to our troubles, rather than resolving them with this nano solution.

Carbon fiber composites need no ovens or autoclaves
Radiative Sky Cooling as a Renewable Source of Energy
Talking CO2 in the midst of a pandemic
A natural way of turning off the carbon dioxide tap, California style