Ion-gels have possible applications in organic electronics due to their favorable electronic characteristics and good thermal and chemical stability. 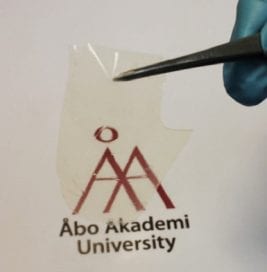 Ion-gels have possible applications in organic electronics due to their favorable electronic characteristics and good thermal and chemical stability. In a new report in the Journal of Polymer Science Part A: Polymer Chemistry, researchers from Åbo Akademi University in Finland report flexible, transparent ion-gel films made by electron beam curing.

The ion-gel films were fabricated by blending acrylate monomers with an ionic liquid precursor. The mixture was deposited on a polyethylene terephthalate substrate, then irradiated by electron beam. The irradiation induced polymerization to produce free-standing ion-gel films. The method as the potential to be scaled to industrial sizes because it is quick, uses no solvent, and is roll-to-roll compatible.

In order to examine the suitability of the ion-gels in organic electronics, the films were used in transistors, supercapacitors, and electrochromic displays. The films were transferred to device components using tweezers, showing the material’s high mechanical strength. The ion-gel transistors operated at low voltages (<1.5 V), had on-currents on the milliamp scale, and ON/OFF ratios of over 104. The researchers then fabricated a single pixel electrochromic display using one of their ion-gel transistors. Depending on the oxidation state of a PEDOT:PSS layer, the display was either dark or light blue. In the oxidized (light blue) state, the layer becomes highly conductive.

Pictures of the ion-gel electrochromic display showing the (a) reduced (dark-blue) and (b) oxidized (light blue) state of a PEDOT:PSS layer.