Physicists at the U.S. Department of Energy’s Ames Laboratory have discovered surprising changes in electrical resistivity in iron-based superconductors. 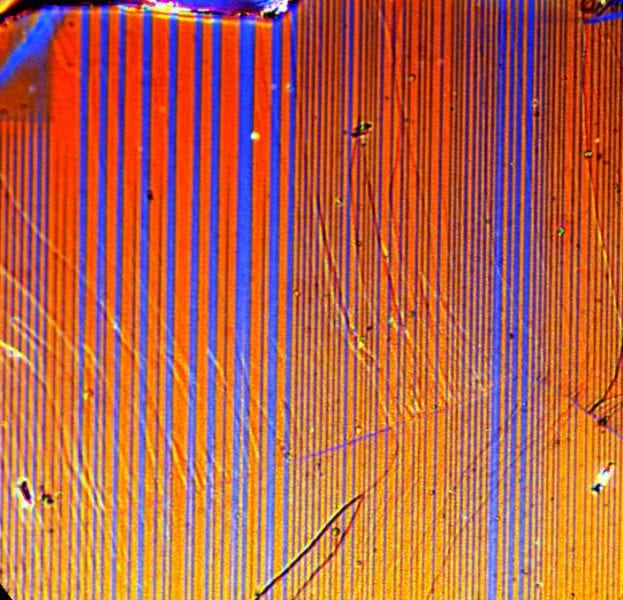 A polarized light microscopy image of structural domains in a barium-iron-arsenide crystal, a type of superconductor. Ames Laboratory physicists discovered unexpected resistivity changes in crystals doped with potassium, which suggest a close relationship between magnetism and superconductivity in iron-based superconductors.

Physicists at the U.S. Department of Energy’s Ames Laboratory have discovered surprising changes in electrical resistivity in iron-based superconductors. The findings offer further evidence that magnetism and superconductivity are closely related in this class of novel superconductors.

“We found that the directions of smallest and largest resistivity within the conducting layers are significantly dependent on the composition of the compounds, and in some compositions, they change sign, or, in other words, electric current flows easier in the direction that was originally more difficult” said Ames Laboratory faculty scientist Ruslan Prozorov. “This change can only be explained if the underlying magnetic behavior is intimately connected to superconductivity.”

Understanding the basic physics behind iron-based superconductivity may someday make it possible to use them for super-efficient energy technologies.

Erick Blomberg, an Ames Laboratory graduate research assistant, spearheaded the research under the guidance of Prozorov and Ames Laboratory scientist Makariy Tanatar. The team studied resistivity in barium-iron-arsenide compounds with different chemical substitutions, which allowed for probing electronic properties throughout the entire regime in which magnetism and superconductivity coexist.

“But there is a complication,” said Prozorov, who is also an Iowa State University professor in the Department of Physics & Astronomy. “In the coexistence region, the crystal structure of barium-iron-arsenide crystals is such that the crystal splits into the structural domains (also known as structural twins), which makes studying directional electronic properties difficult.

To eliminate the structural domains, the team developed a technique in which single crystals are physically pulled apart. A sample is suspended by wires in a horseshoe-shaped bracket, which can be mechanically stretched. This assembly is then placed into a small liquid helium cryostat to reach temperatures where magnetism and superconductivity coexist. Polarized optical microscopy is used to distinguish between different structural domains to verify that the samples are in the detwinned (without fragmented domains) state. Electric resistivity is then measured.

Blomberg and colleagues studied a series of samples, covering a precise range of compositions, provided by Nanjing University’s Hai-Hu Wen.