A smart cell-targeting approach for potential use in specific cell ablation. 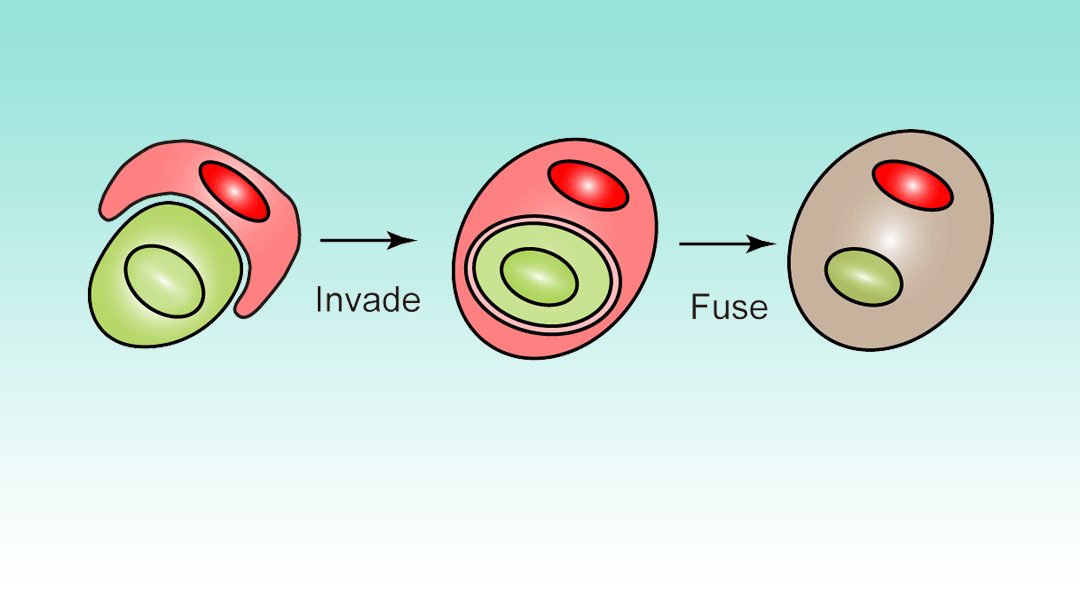 Active invasion of a living cell into another living cell is called entosis. Such “trapped” cells are still alive. For this reason, a system that could force cells to invade a specific class of other cells would be an attractive tool for biotechnological use.

Kojima and Fussenegger from the University of Tokyo and ETH Zurich demonstrated a smart cell-targeting approach by synthetically induced polarization of RhoA activity inside the cells in response to specific cell contact. This system allowed invader cell polarization that triggered selective penetration into the cells expressing target antigen.

Briefly, for target‐cell‐specific invasion engineered cells were equipped with a chimeric protein consisting of extracellular and transmembrane domains of CD43 and constitutively active RhoA, as well as a chimeric protein of ML39 (HER2 recognition moiety)‐CD28 transmembrane domain‐dominant negative RhoA (ML39‐CD28TM‐RhoADN). In the absence of target antigen, no RhoA polarization could be observed, while upon binding to HER2 on target cells, the desired polarization of RhoA and invasion of the target cells occurred.

Cell-in-cell invasion is quite risky for the invading cells, because invader cells might be degraded by receiver cells by lysosomal digestion. Thus, the authors expressed the protein VSV‐G on the invader cells, which promotes cell fusion under acidic conditions and the whole intracellular content of invader cells will be released into cytosol of the receiver cells.

To semi-quantitatively evaluate invasion without the need for subjective assessment of cell‐in‐cell structure, an assay using SEAP reporter was constructed. Invader cells were transfected with constitutive tTA expression vector, and receiver cells were transfected with tTA‐responsive SEAP expression vector. Upon cell fusion, SEAP expression from the tTA‐responsive promoter is triggered by supply of tTA from the invader cells.

Moreover, the authors also could show that this target‐cell‐specific invasion/fusion system is potentially available for specific cell ablation.

This paper demonstrates a robust mechanism with great potential for targeted therapy.