Interfacing biological systems with nanomaterials may have a significant impact in research fields such as biosensors and tissue engineering. 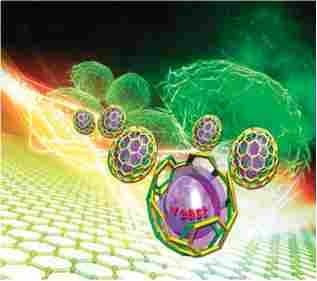 Interfacing biological systems with artificial materials may have a significant impact in research fields such as single-cell-based sensors, neuron-on-a-chip technology, and tissue engineering. In particular, graphene, which is a two-dimensional atomic sheet of carbon, can be an interesting new candidate for the interfacing of a nanomaterial with biological systems such as living cells due to its superior physical, chemical, electrical, and mechanical properties.

The versatile layer-by-layer assembly technique allows this approach to be expanded by integrating other organic polymers or inorganic nanoparticles to the cells by hybridizing them with GO nanosheets through LbL self-assembly. It is demonstrated that incorporated iron oxide nanoparticles can provide magnetic properties to the biological system, and can thus provide new physical and chemical functions to living cells.

While the interfacing of individual living cells with nanomaterials is still in its infancy, the authors have laid the groundwork for the application of biological systems in biosensors, biomedical devices, and tissue engineering.

A Catalyst for Sustainable Methanol
Printing liquid metals: The next generation of wiring
Gentle tapping with magnetic needles for less invasive surgeries
Taking the sting out of dental procedures with microneedles