Researchers at the University of Toronto discuss the origins and advances of carbon dioxide photocatalysis. 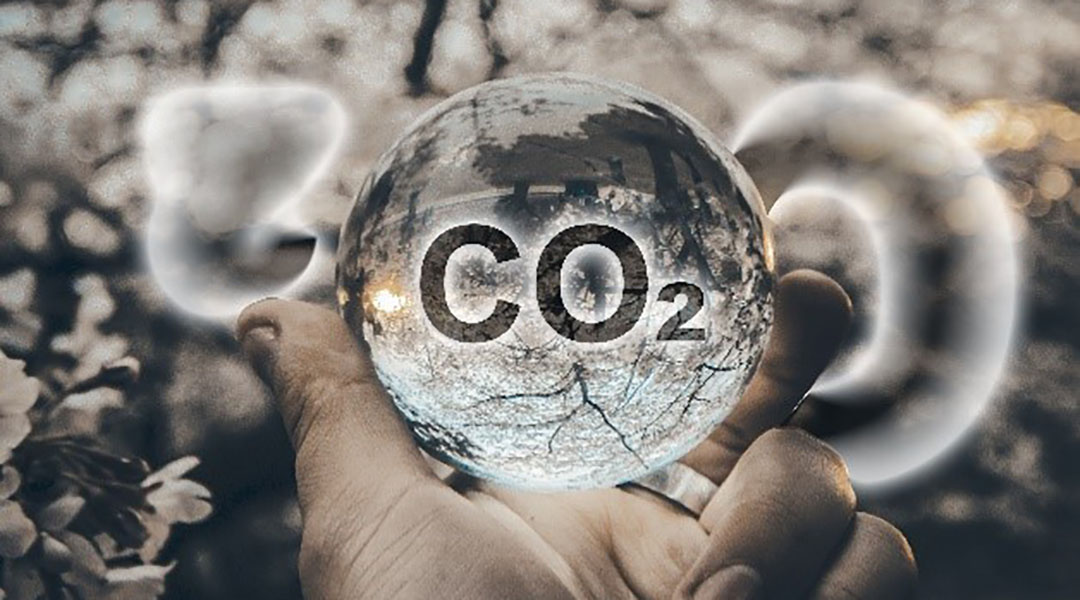 The University of Toronto Solar Fuels Group published their first two papers on the production of solar fuels by gas-phase heterogeneous CO2 photocatalysis in the inaugural 2014 issue of Advanced Science.1,2 The work was featured on the front cover. Since then, the researchers of the solar fuels group have been unabashed champions of Advanced Science, avid contributors to the journal and on this special occasion, totally thrilled to recognize the first five very successful years of the journal with our paper entitled , Towards Solar Methanol: Past, Present and Future, published on the fifth anniversary celebratory issue of Advanced Science.3 In addition, as an Invited Editor for Advanced Science News and having contributed regular opinion editorials since its inception,4 I was asked by Editor Kirsten Severing to gaze into the crystal ball with my co-workers and colleagues, to attempt to foresee some of the technological challenges facing the widespread industrialization of CO2 photocatalysis.

Where did the use of light to drive catalytic reactions all begin? The spark that ignited the field of heterogeneous photocatalysis can be traced to the discovery around 1970 that titanium dioxide, TiO2, displayed photocatalytic activity under irradiation with ultraviolet light, most notably for the generation of hydrogen from water in the aqueous phase.5

The story of the development of TiO2 photocatalysis is a classic study in materials engineering, and illustrates how control over the synthesis, structure, doping, defects, non-stoichiometry, polymorphology, morphology, optoelectronic properties, and surface chemistry relations led to the success of this technology.5,6

Success in this endeavor was contingent upon a detailed, interdisciplinary understanding of how the relations between these properties enable TiO2 to function as a photocatalyst, and through the use of this understanding, how to engineer new catalyst architectures that optimize the photonic efficiency of the catalyst while maximizing its chemical, thermal, and mechanical stability for high-throughput, cost-effective, large-scale, applications. Investigations leading to the development of potential recovery and recycling processes for such catalysts at the end of their life cycle are also going to facilitate their rapid and widespread usage.

Building on this success, today’s global market for heterogeneous photocatalysts is currently valued at around USD $1.65 billion and is forecast to grow at a compound annual rate of 12.6% over the coming five years, to reach an estimated value of around $2.9 billion by 2030.6

After five decades of research and development, TiO2 turns out to be industry’s favorite photocatalyst for water purification, detoxification of volatile organic compounds and nitrogen oxides in air, and decomposition of crude oil spills. It also finds utility in green cement, paints, tiles, and anti-bacterial surfaces.6 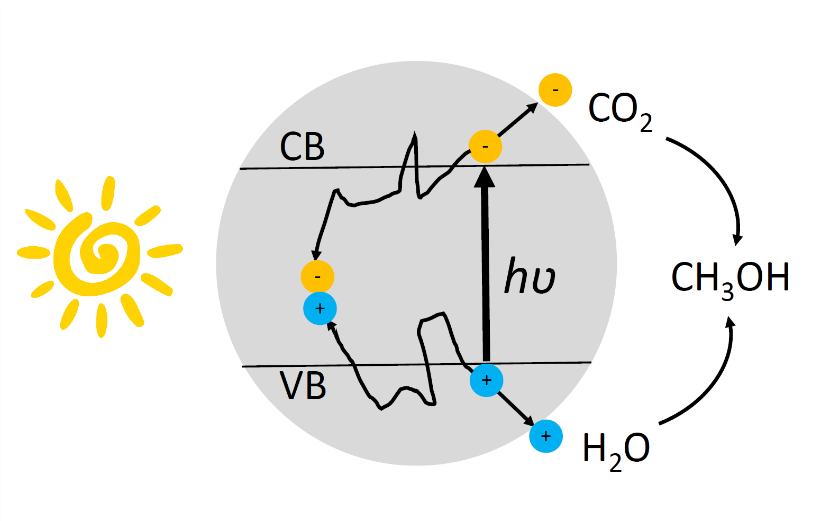 Figure 1. Illustration of examples of photochemical and photophysical processes that can occur when sunlight is absorbed by a nanostructured semiconductor photocatalyst. The photogenerated electrons and holes can either recombine in the bulk or surface of the semiconductor to produce light or heat or they can react with for example, H2O and CO2 at the surface to produce CH3OH.

Towards industrial CO2 photocatalysis, a promising contemporary strategy for alleviating some of the effects of climate change is the capture and conversion of CO2 into useable fuels and as a platform for speciality chemicals including polymers. This can be achieved through photocatalysis whereby sunlight drives a photochemical reaction, such as that between gaseous CO2 and H2O vapor, to create solar fuels like solar methanol (Figure 1) as exemplified in our paper, “Towards Solar Methanol: Past, Present, and Future”. This can also be viewed as the direct storage of solar energy in the form of chemical energy, wherein the energy of incident photons is transformed into energy contained within the chemical bonds of these molecules, which can subsequently be used as a chemical feedstock or fuel.

The light-assisted chemical conversion illustrated in Figure 1 is facilitated by a photoactive catalyst, which is most often a nanostructured semiconductor, such as a metal oxide. As the chemistry occurs at active sites on the surface of the semiconductor, one can appreciate the benefit of using semiconductor nanomaterials with large surface areas and modifying the photochemistry of active sites in these surfaces using creative functional nanochemistry.

The electronic bandgap of the semiconductor—the energy difference between the valence and conduction bands—controls the optical absorbance and wavelength range for harvesting solar photons. The light absorbed by the semiconductor generates electron and hole charge carriers. Those carriers that manage to separate and transport their charge to chemically active sites at the surface of the photocatalyst can enable surface chemical reactions to occur, such as those between the CO2 and H2O molecules to form products as mentioned above.

Photocatalyst materials discovery continues to be an exceptionally active field, and efforts directed towards the search for an efficient, low cost, non-toxic, stable, and scalable material for generating hydrogen and fuels from water and CO2 thrive in the literature.5,6 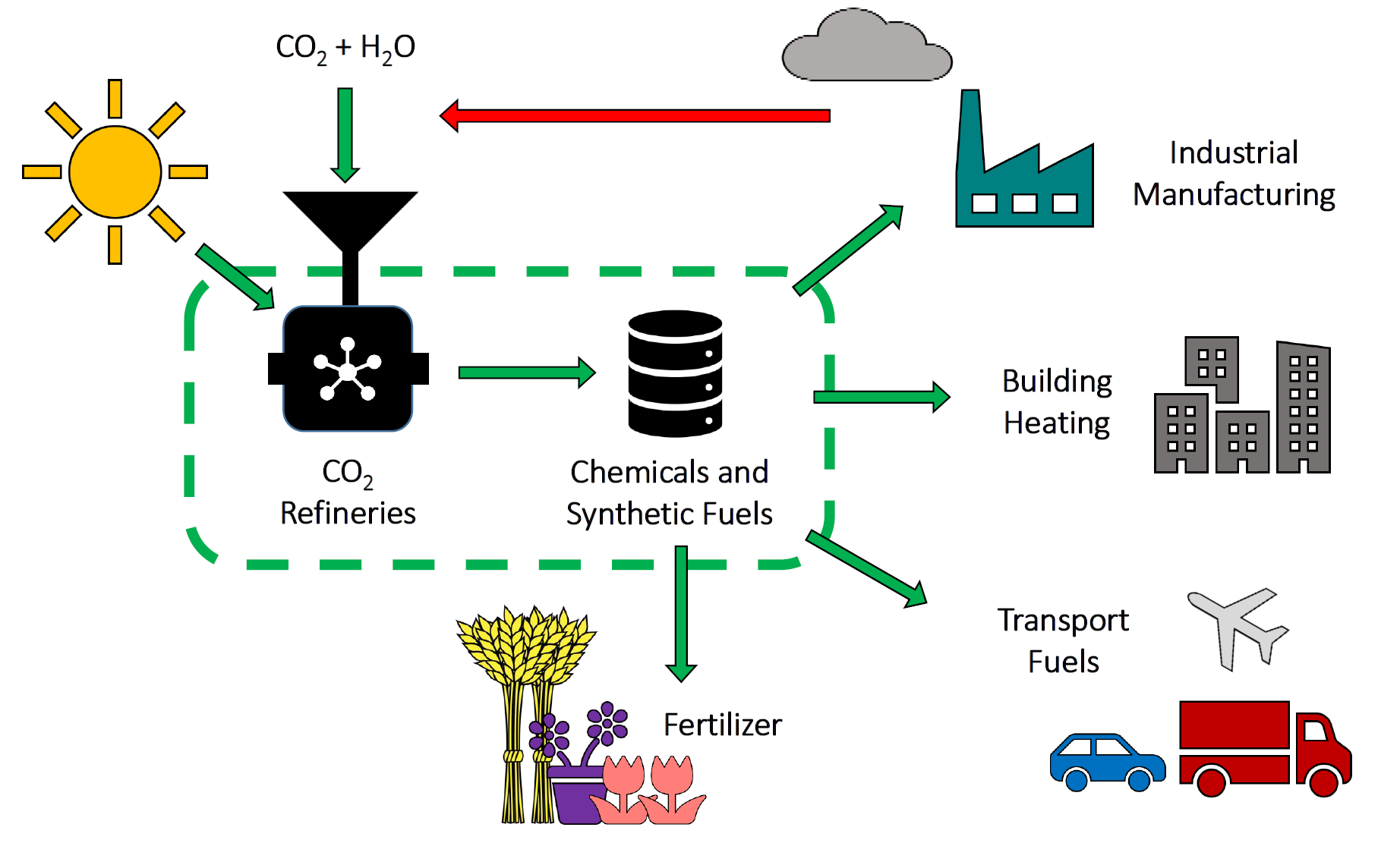 This endeavor could help deliver a circular carbon economy and a sustainable future, as envisioned in Figure 2. In order to be competitive with conventional thermochemical processes, the best industrially relevant photocatalyst should be able to attain the highest reaction rate and the greatest conversion using the smallest amount of catalyst, the lowest incident photon flux, and a temperature and pressure closest to ambient temperature and pressure.

The discovery and development of high-performance photocatalyst materials is just one side of the story of industrializing CO2 photocatalysis. The other involves how best to marry photocatalysts and photoreactors into a high-photonic-efficiency technology.

This will require innovative reactor design that miniaturizes the unit operations involved in their fabrication process leading to minimum unit operations in achieving an optimal ease of operation, as well as their scale-up and validations.

The latter requires optimization of an optically and chemically engineered system that concentrates and homogenizes light intensity in an absorbing and scattering photocatalyst bed integrated within a photoreactor configuration.

Besides the capture, transport, absorption, and utilization of incident light, let us not forget all of the transport processes of mass and heat, and their optimum management considerations, required to translate CO2 photocatalysis technology into practice.

Success in this endeavor will require photocatalyst and photoreactor architectures in which the utilization of light is optimized. Maximizing the absorption of light by the photocatalyst is paramount and will necessitate minimization of deleterious reflection, scattering and transmission losses. While high optical absorptivity favors large populations of electron-hole pairs and high photocatalytic activity, reflection and scattering effects limit the penetration depth of light to photoactive sites throughout the catalyst. This is the main reason why the majority of promising heterogeneous photocatalysts for CO2 hydrogenation today have photonic efficiencies well below 1%. To achieve technological practicality, photonic efficiencies will need to be boosted to at least match that of the best photovoltaics.

Thin photocatalytic films could, in principle, resolve the above-mentioned light penetration problem, but technologically, this would require large areas of land, making it economically, environmentally, and socially unacceptable. An innovative and practical solution to this conundrum focuses on the utilization of hierarchically porous photocatalysts, exemplified by aerogel, monolith, foam, mesh, or channel architectures as well as wire, rod, tube, fibre, plate, and sphere assemblies. Millimeter to micron scale pores in these hierarchical constructs allow light to enter and penetrate throughout the body of the material via multiple light scattering processes. This provides light with access to the entire internal surface of the material, which can be intrinsically photocatalytic or made photocatalytic by coating with a photoactive material. By this means, each photoactive surface site can, in principle, be accessed by every incident photon, thereby maximizing the conversion of light to chemicals and fuels.

One school of thought is that photocatalytic processes are superior to competing electrocatalytic CO2 conversion processes because their operation and life cycle carbon footprint is not contingent on the presence of renewable grid electricity; they use only light. Intermittency challenges can be overcome using LED sources and heat management. Furthermore, heterogeneous catalysis is a method that has been the backbone of the global chemical industry for more than a century. Recall that catalysts are employed in around 90% of industrial chemical and petrochemical processes, and more than 90% of these are driven by heterogeneous thermocatalysis, most often powered by fossil fuels.8,9 It make sense therefore to use light to drive CO2 conversion reactions by integrating photocatalysts and photoreactors into the existing chemical and petrochemical infrastructure. 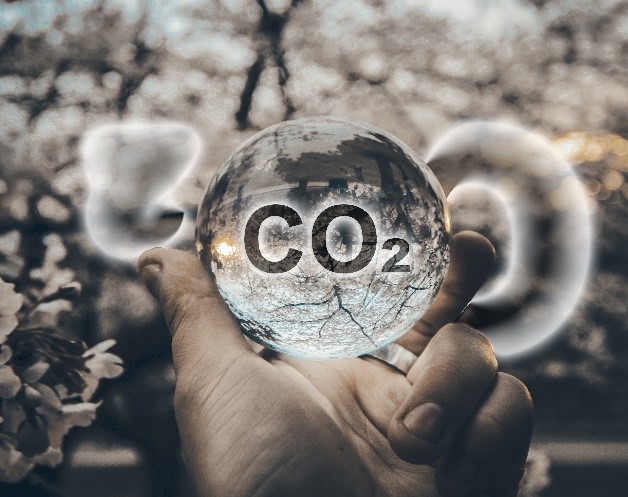 While there are formidable economic, environmental, policy, regulatory, legislative, and societal issues that have not been explored in this article,10 our look into the CO2 technology crystal ball, Figure 3, makes us optimistic that hurdles of the above kind will be overcome in the next few years. These will include rapid development of engineering solutions to high photonic efficiency photocatalyst architectures and photoreactor designs, ushering in a very bright future for the industrialization of gas-phase heterogeneous CO2 photocatalysis. 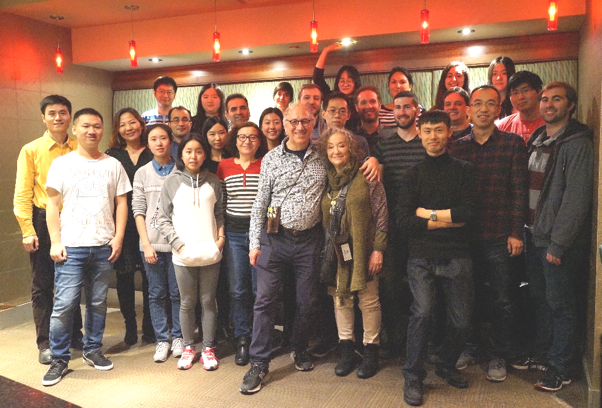 This month in pictures
Mimicking the Motions of the Multitalented Octopus
Is your work not novel enough?
Extending the Range of Electric Cars with Invisible Solar Panels