Indole: A Multifaceted Regulator of Behavior

In their review in BioEssays, Jeffrey Tomberlin et al. take a closer look at indole and how this molecule influences behavior in a wide variety of organisms. 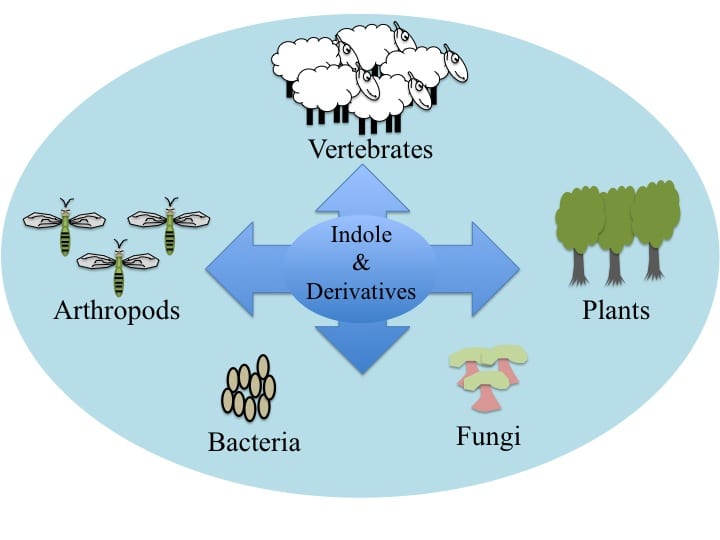 Indole is a derivative from the metabolism of the essential amino acid tryptophan. Plants, as well as free-living bacteria, are able to degrade tryptophan to yield indole, whereas animals acquire indole from the bacteria which colonize them. Indole has long been known to act as an environmental cue: Being a metabolite of the valuable resource tryptophan, it may provide useful information about the location and/or availability of tryptophan.

However, as Tomberlin et al. point out, indole not only plays a role as an environmental cue but also helps to regulate complex interactions. These interactions are not even confined to single species, but can even take place between different ones. One example where indole acts as an intraspecific signal is quorum sensing in microbial cells: In E. coli, for example, production and extracellular accumulation of indole leads to a delay in cell division. Plants represent another example: upon herbivore attack, plants are able to release volatile compounds, including indole. Nearby plants of the same species are able to sense these signals and to subsequently enhance their defensive mechanisms.

With regards to inter-species (or even inter-kingdom) interactions, indole has, for example, been found to act as a signal between E. coli and its mammalian host. Here, indole has been shown to tighten gut epithelial cell junctions which helps to prevent invasion by pathogens. An additional example is the interaction of the fungus Lysurus mokusin and mycophageous insects. The fungus releases a scent –which indole is part of – to attract these insects. After feeding on the fungus, the insects not only help to disperse the spores, but passage through the insects’ alimentary tract also enhances the spores’ ability to germinate.

In addition to the above examples where indole is used as an honest signal, the authors also discuss instances in which indole is employed as a manipulative signal. In these cases, the sender of the signal receives a fitness benefit by sending the signal whereas the receiver experiences some fitness cost.

New device refines scientists' ability to sort and process human cells
Moving messengers making their way to the limelight
That “junk” DNA … is full of information!
Where and how do RNAs localize in tiny prokaryotic cells?