For measuring mitochondrial oxygen pressure clinically, just apply a cream on the skin. 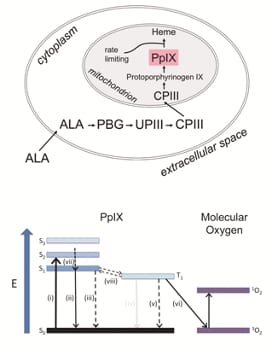 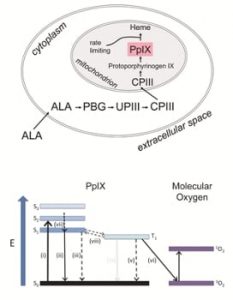 An adequate supply of oxygen is essential for mammalian cells to sustain life. Molecular oxygen is used in oxidative phosphorylation in the mitochondria. Many techniques have been developed for measuring oxygen in vivo; however, due to invasiveness or the need for injection of foreign compounds into the circulation, most techniques have been restricted to preclinical use in laboratory animals. Egbert G. Mik and a team of scientists at the University Medical Center Rotterdam (The Netherlands) have now developed a method that could overcome this restriction. It utilizes endogenous porphyrin for measuring oxygen – and only a cream would have to be applied to the patient’s skin.

The cream contains 5-aminolevulinic acid (ALA) which is a precursor in porphyrin synthesis. Its application induces the accumulation of endogenous protoporphyrin IX (PpIX) inside mitochondria. PpIX enables quantitative oxygen measurements by means of oxygen-dependent quenching of delayed fluorescence. ALA is clinically used in photodynamic diagnosis and therapy of cancer. The clear advantage of topical application of ALA over systemic administration would be the reduction of potential side effects. The measurement equipment was fiber-based and robust and can be adapted for clinical use.

To test the feasibility of measuring oxygen-dependent delayed fluorescence in skin after topical application of ALA, the researchers topically applied 2.5% ALA cream on the skin of anesthetized and mechanically ventilated rats. Delayed fluorescence was detected from the side of application and the oxygen-dependency of the lifetime was tested. They also performed a pilot experiment on the forearm of a volunteer. Delayed fluorescence was measured under normal conditions and 2 minutes after cessation of blood flow by inflation of a bloodpressure cuff around the arm.

Three hours after topical application, oxygen-dependent delayed fluorescence could easily be observed in both settings. The delayed fluorescence signal contained a complex (reciprocal) lifetime distribution as determined with the exponential series method (ESM). Yet, in its current form it is too slow for real-time analysis. While mono-exponential analysis (MEA) had the tendency to overestimate the average lifetime, the rectangular distribution method (RDM) provided results that were comparable to ESM analysis.

The reciprocal lifetimes are linearly dependent on the oxygen levels and this makes the technique useful even in the absence of true calibration. For example, dynamic measurement of the reciprocal lifetimes during photodynamic therapy could give insight in the rate of oxygen disappearance due to oxygen-radical formation. This could be helpful for optimizing the effect of treatment. The new method could also be used to monitor cellular oxygen availability in the skin of critically ill patients.