In Remembrance of Prof. Hans-Joachim Cantow 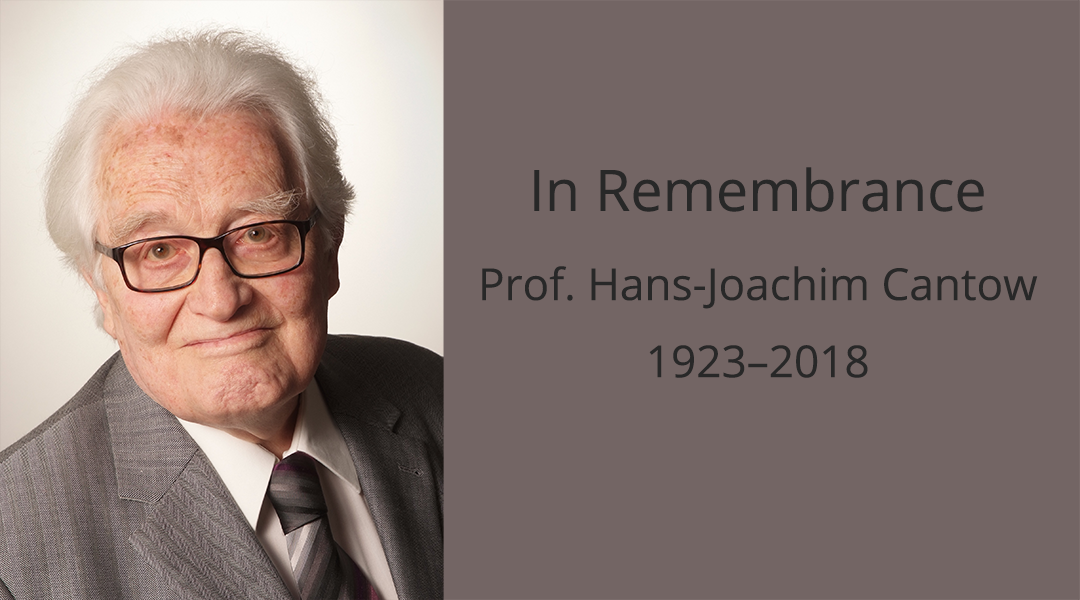 He remained a very active part of the scientific community, even up to a few weeks before his passing. During his scientific career Prof. Cantow was the recipient of numerous awards, including the First Class Federal Cross of Merit, the Louis Pasteur Medal of the University of Strasbourg, France, and an honorary doctorate from the University of Iasi, Romania.

Originally from Oberhausen, Germany, he studied chemistry at Johannes Gutenberg University Mainz with a focus on polymer chemistry. After completing his doctorate at the University of Mainz, he began working at the Chemische Werke Hüls (now Evonik) in Marl. At the same time, he completed his habilitation thesis. A year after his habilitation in Mainz in 1964, he followed the call for the newly created Professorship of Physical Chemistry of Macromolecules at the University of Freiburg.

From 1967 until his retirement in 1991, Prof. Cantow was director of the Institute for Macromolecular Chemistry. His scientific focus was in the solution and melting behavior of macromolecules, and their composites. He researched thermodynamics, scattering methods, spectroscopy, rheology and the characterization of surfaces and interfaces by means of modern microscopy. Prof. Cantow had a keen eye for spotting novel methods with future potential, enabling them to be picked up and to break new ground.

He co-founded the Collaborative Research Center SFB60 “Function by Organization” and introduced one of the first high-resolution nuclear magnetic resonance spectrometers at the University of Freiburg. With his research, he was able to elucidate fundamental relationships between structure formation and material properties of macromolecular materials. In addition, Prof. Cantow transformed the former institute–internal research seminar “Macromolecular Colloquium” of the Freiburg Chemist and Nobel laureate Prof. Dr. Hermann Staudinger into a European symposium that annually brings together more than 700 participants from universities, research institutes and industry from around the world to Freiburg. The legacy that endures is that Macromolecular Colloquium is appreciated as the “family gathering” of the German polymer sciences.

From the beginning, Prof. Cantow combined basic academic research with applied research and fostered close collaboration with business at a time when this was still quite unusual. He brought students into contact with industrial executives, and through his vision for Freiburg’s materials research and initiative, the Freiburg Materials Research Center (FMF) was founded in 1990, and since then, true to its mission statement, has been successfully pursuing practice-oriented basic research across disciplines, institutions and countries.

He exemplarily advocated for junior researchers. Thus, he was the initiator of numerous careers in science and industry, which began in Freiburg. Through his always positive visions he understood the need to inspire and motivate students and colleagues in materials research.

We miss our esteemed colleague, friend and adviser.

Rolf Mülhaupt
Director of the Institute for Macromolecular Chemistry