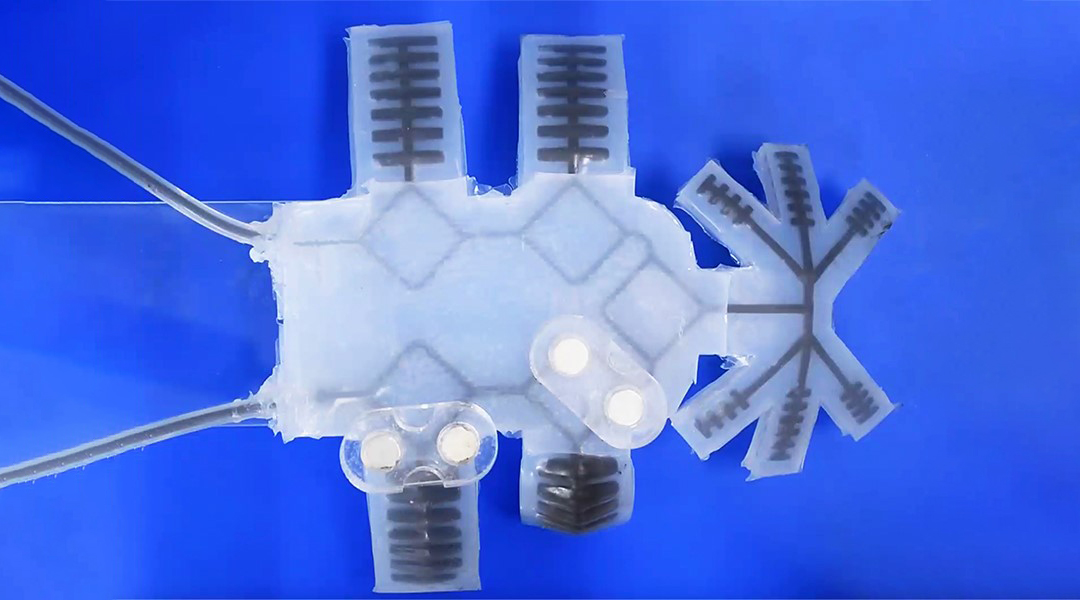 Soft robots can solve complex problems where traditional rigid robots present limitations. In sensitive environments, such as within the human body, the compliant nature of soft robots lends an inherent safety to delicate tasks. Soft robots are dexterous, adaptable, and capable of complex motions.

While there are a variety of methods to actuate soft robots to allow them to locomote or interact with their environment, pneumatic and hydraulic systems remain among the most popular due to their low cost and simplicity. In such a design, a fluid (air or water, respectively) within the robot is pressurized, causing the device to bend in a controllable, pre-determined way. However, the technology is not without its limitations.

Pressure is typically supplied to the robot by an external controller via tubing tethered to the robot. This greatly limits the robot’s independence. This issue is exacerbated in more complex robots with multiple independent actuators, each requiring their own tube connected to the pressure source. This can contribute considerable bulk and stiffness to a robot that would otherwise be light and compliant.

To address this issue, a team from Boston University led by Professor Tommaso Ranzani has developed a strategy to exploit the same fluid both for actuation and as a means to embed fluid control elements onboard a soft robot. “This was achieved using a magnetorheological (MR) fluid as the robot’s working fluid,” explained Kevin McDonald, first author of the paper. “This material, a suspension of micron size iron particles in a carrier fluid, such as water, experiences a dramatic change in the presence of a magnetic field.”

With no field present, the material behaves like a liquid. However, when a field is applied, the particles line up along the field lines, causing the material to behave like a solid with a measurable yield stress. The strength of this effect scales with the strength of the applied field such that a larger applied field results in a larger yield stress.

The team’s findings were recently published in Advanced Intelligent Systems, and exploit the behavior of MR fluids to introduce valves into soft robots. By controlling the strength of the magnetic field using either permanent magnets or electromagnets applied to a recirculating MR fluid, the researchers were able to control the fluid’s pressure in a repeatable, predictable way. Increasing the magnetic field applied to the flow increased the fluid’s yield stress, thus increasing the pressure. This was then used to control the inflation of several different pressure-driven soft actuators. These included a single-actuator device, a soft gripper consisting of several coupled actuators, and devices consisting of multiple individually-controlled, independent actuators. In each case, only a single inlet and outlet tube were required to provide the recirculating MR fluid flow to the soft devices.

While future works will focus on optimizing MR fluid and the integration of controllable magnetic sources onboard soft robots, this work introduces a new methodology for on-board soft fluidic actuation that relies on magnetism instead of requiring additional fluidic lines, paving the way towards more autonomous and controllable soft robots.

The precise control of highly autonomous soft robots remains a major barrier to their adoption into commercial applications. The development of novel control methodologies continues to bring them closer to use in real-world applications in vital areas such as medicine, exploration, and beyond.

Abigail Rendos, Ph.D. student in the KABlab, Division of Material Science and Engineering

Stephanie Woodman, undergraduate student working in the Morphable Biorobotics Lab and in the KABlab, Department of Mechanical Engineering, Boston University