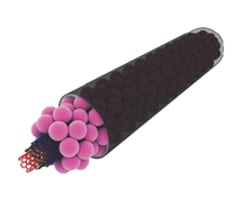 Recent work by Zhao et al., published in Advanced Science, discusses a novel hybrid morphology of SnO2 (tin oxide) as an anode material for lithium or sodium ion batteries. SnO2 has a high theoretical capacity and level of safety, but has been previously limited by low electrical conductivity and large volume changes.  Zhao et al. designed and synthesized a new multi-walled carbon nanotube nanostructure containing SnO2 in order to enhance its electrical properties.

Lithium-ion batteries, already popular in small electronic devices, have significant potential as a solution to problems such as energy storage and powering electric vehicles, but suffer from safety concerns. Sodium-ion batteries have been proposed as an alternative to lithium-ion batteries due to their relatively low cost, and the global abundance of sodium, but have been less developed to date. In order to maximise their potential uses the safety, energy densities, and cost of both these battery types need to be optimised. The choice of anode (negative electrode) material can strongly influence the physical characteristics of an ion battery, with graphite being the most commonly used anode material in lithium batteries.

Tin oxide anodes suffer from large volume changes (over 300%) during battery cycles, which cause slow charge diffusion kinetics and agglomeration and pulverisation problems. A proposed solution to this problem is to combine SnO2 with carbon nanomaterials, thereby increasing electrical conductivity and controlling volume changes. In the new design SnO2 is confined within the open structure of the multi-walled carbon nanotubes, allowing the SnO2 volume changes during cycling to be accommodated, while providing high levels of electrical conductivity. This method may also be applicable to other electrode materials in order to improve battery performance.