Researchers have imaged the structural organization of tendon with second harmonic generation microscopy. 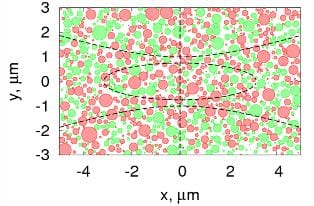 Imaging the noncentrosymmetric structural organization of tendon with interferometric second harmonic generation microscopy reveals that its structure is made of domains in which the ratio between fibrils with positive and negative polarity is unbalanced.

Second harmonic generation (SHG) microscopy is a powerful technique for biomedical imaging, especially of connective tissues rich in collagen type I/III, cartilage tissues rich in collagen type II, the myosin bands of muscle, and microtubules. One common aspect of all those biological structures is that they are composed of noncentrosymmetric proteins.

On average, a tissue contains an equal amount of fibrils of each polarity. Since the diameter of the collagen type I fibril is in the range of few tens to few hundreds of nanometers, smaller than the optical resolution provided by nonlinear optical microscopy, it is unclear why there is an imaging contrast based on the process of SHG in tissues rich in collagen type I proteins such as tendon.

Using SHG microscopy, it is not possible to determine the phase of the measured signal. The phase of the signal is of interest, because it would provide relevant information about the relative orientation between the noncentrosymmetric structures of a tissue. Researchers from Canada, Germany, and the UK used interferometric second harmonic generation (ISHG) microscopy, a combination of SHG microscopy and interferometry, to circumvent this limitation.

By imaging tendon, a tissue rich in collagen type I, with ISHG the team led by François Légaré from the Institut National de la Recherche Scientifique (Varennes, Canada) was able to gain important information about its noncentrosymmetric structural organization.

The researchers observed that the noncentrosymmetric structural organization can be maintained along the fibrillar axis over more than 150 µm, and about 1–15 µm in the transverse direction. For an explanation, they performed numerical simulations of the SHG in fibrillous samples. They modeled tendon as a heterogeneous distribution of noncentrosymmetric nanocylinders (collagen fibrils) with parallel axes oriented along the fibrillar axis. This is a good approximation since collagen fibrils are very well aligned in connective tissue.

A comparison of the experimental SHG phase distribution and the theoretical model of tendon supports the theory that groups of fibrils form macroscopic domains in which the ratio between fibrils with positive and negative polarity are not balanced. The fluctuations of this fraction at different locations in the tissue explains the observation of bright domains with standard SHG microscopy.

Besides contributing a better understanding of such structural issues, ISHG microscopy might also shed light on electromechanical cell signaling and the piezoelectric modulation of mechanical behavior.