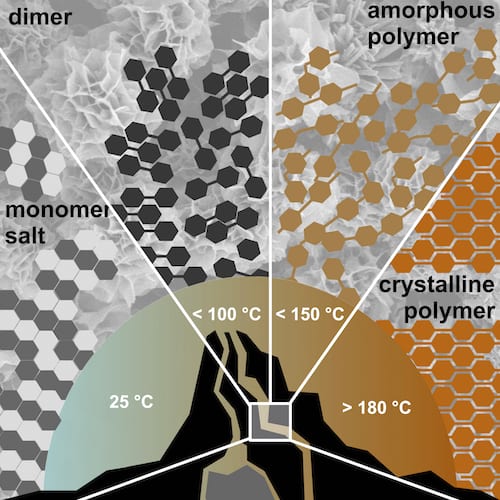 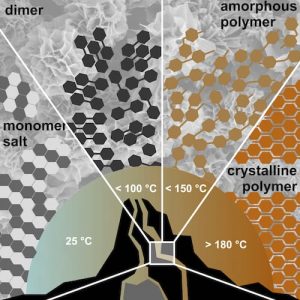 Plastics are omnipresent in modern daily life. We begin our days with coffee, which we brew in a coffee machine that is made from plastic. The milk we add to our coffee is packaged in a plastic container, and when we brush our teeth after breakfast, we use toothbrushes that are made out of plastic.

Less prominent than commodity plastics found in the latter examples, but by no means less important, are so-called high-performance polymers (HPPs).

Hence, HPPs are found on printed circuit boards in every cell phone or notebook, in automotive and aeronautics applications, but also as part of industrial wastewater and exhaust gas filtering systems.

The latter designate water at temperatures above 100 ˚C and pressures higher than 1 bar. In the earth’s crust, these situations are found in so-called hydrothermal veins, in which high-temperature water circulates. The crystalline ores generated under hydrothermal conditions are e.g. zeolites and silicate minerals. Mechanistically speaking, they are forming by condensation reactions. Most interestingly, the HPP class of polyimides also forms by condensation reactions.

Unterlass’ team could show that hydrothermal conditions can be used to not only generate polyimides in nothing but water, but that highly ordered polymer materials – as is the case for natural minerals – are obtained.

To date, little was known about HTP, which is mainly due to the difficulty of studying reactions at high temperatures and pressures. In a recent contribution in Macromolecular Chemistry and Physics, the team presents new insights on the ongoings during HTP.

They circumvent the difficulty of monitoring the process in real-time by carefully analyzing ‘input’ and ‘output’ of the reaction. The results show that hydrothermal polymerizations can be subdivided into several temperature regimes, which lead to different outcomes with respect to polymer length and crystallinity.

While highly crystalline products are obtained at > 180 °C and > 14 bar, amorphous to semicrystalline polymers are generated below 150 °C. In an even lower temperature regime, they could identify dimer species and could therefore show that hydrothermal polymerization is mechanistically closely related to classical polycondensation reactions.

The authors correlate the findings of the different regime with the physicochemical properties of the reaction medium water at different temperatures. By then working in the higher hydrothermal regime of >180 ˚C, the authors were able to prepare two different polyimides of such high crystallinity that the previously unknown crystal structure could be refined.

The results add further understanding to a benign alternative polymerization process yielding polymers that are typically only conceivable under harsh conditions, which is directly applied for the synthesis of outstandingly crystalline polyimides.

Miriam M. Unterlass’ article is a contribution to the special issue Young Talents in Polymer Science published by Macromolecular Chemistry and Physics.