More Hydrogen for Less: Engineering the Catalytic Performance of MoS2

Hydrogen won’t be a viable fuel source without a replacement catalyst for platinum. This MoS2 hybrid looks set to provide some realistic competition. 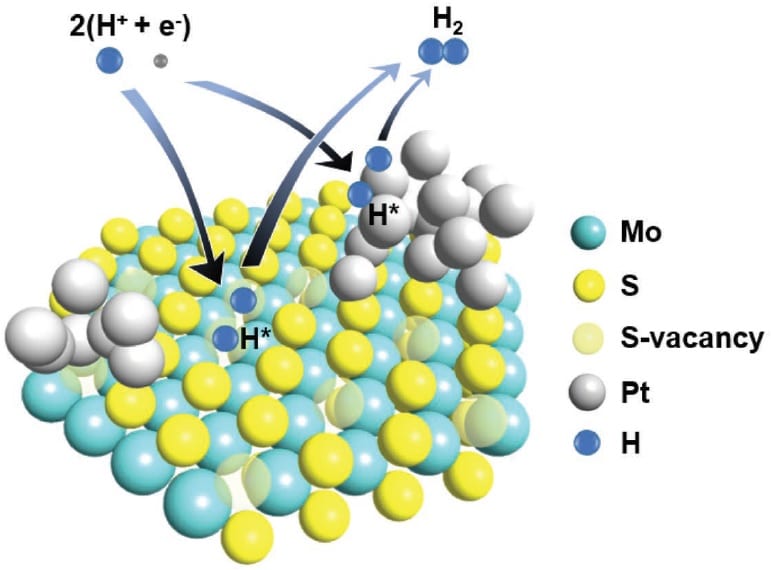 Hydrogen is being seriously considered as a renewable energy source, capable of replacing fossil fuels. The most direct way to produce hydrogen on the required scale would be to ‘split’ water, using what’s called the hydrogen evolution reaction (HER).

Platinum is the benchmark catalyst for this and many other reactions, but its supply is considered to be at relatively high risk: 7.6/10 according to the British Geological Survey’s Risk List for 2015, and classified as being under “rising threat from increased use” according to the ACS Endangered Elements table. 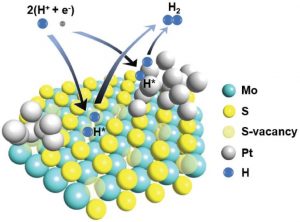 Replacements for platinum are everywhere, but their performance just can’t compete with platinum’s near-zero overpotential, which is a measure of how much extra voltage above the theoretical value is required for a reaction to proceed and, therefore, an indicator of the efficiency of an electrochemical cell. Scientists working in China and the USA decided to do something about that, and selected the increasingly popular MoS2 as their subject.

MoS2 didn’t become popular for nothing. It’s very stable during reactions but has a high catalytic activity, and there is a comfortable amount of it available in the world. Others have already tried to improve its charge transport, or to create more active surfaces for catalysis by influencing its morphology. These researchers wanted instead to manipulate its electronic structure, but in a low cost, simple and scalable way. 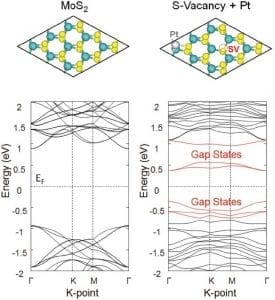 By controlling the concentration of S vacancies and depositing tiny amounts of platinum on the surface, they were able to generate new energy bands in the electronic structure of the material and thereby lower the energy required for the adsorption of hydrogen.

They did this by hydrothermally synthesising multilayer MoS2 directly onto molybdenum foil, ensuring good contact between the two and potentially boosting charge transport. This was followed by 120 voltammetry cycles to decorate the surface with the optimum amount of platinum nanoparticles, as determined by polarisation curves tested after various numbers of cycles.

See how they achieved an incredible Tafel slope of just 38 mV/dec in their Advanced Materials Interfaces Communication.