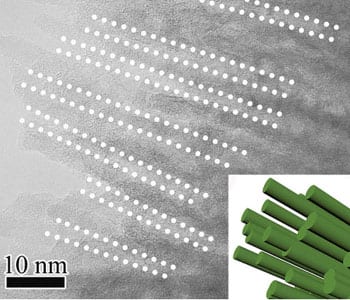 An international research collaboration has designed and synthesized a hierarchical TiO2 nanowire bundle (HM-TiO2-NB) superstructure, with demonstrable promise as an anodic material for lithium-ion batteries. 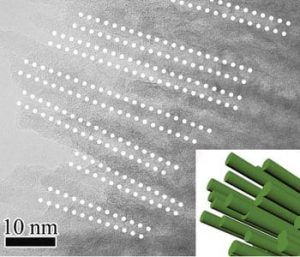 The HM-TiO2-NBs are synthesized using a low temperature templating method, and demonstrate a high reversible capacity, excellent cycling performance, and superior rate capability. An especially interesting detail in the study, is the revelation that during discharge–charge processes the Li+ insertion capability is self-improving, with higher capacities at the second stage in the cycling process compared to the rating process.

The composition and structure of the nanobundle superstructure was confirmed through a variety of techniques. X-ray diffraction and ramen spectroscopy measurements indicated the presence of anatase and rutile planes in the superstructure. It was further determined that each nanowire was coated in an amorphous TiO2 layer. The single crystalline nanowires contain many alternating rutile and anatase nanodomains, established by the analysis of high-resolution transmission electron microscopy images. The hybrid superstructure provides a large contact surface between the electrolyte and anode material, with more active sites for Li+ insertion and extraction. Shorter Li+ diffusion paths and electron transport lengths are achieved thanks to the straight, mesoporous nanowires.

Performance measurements indicate that the HM-TiO2-NB is a highly stable structure. Cyclic voltammograms reveal that following more than one hundred charging cycles, cathodic and anodic sweep peaks (at 1.8 V and 2.0 V, respectively) were unchanged. An excellent capacity retention rate was also found during discharge–charge cycles, with a Coulombic efficiency that even increased (to 95%) during the sixth cycle. An initial discharge capacity at 0.2 C yielded an impressive lithium insertion coefficient of 0.88, much higher than the theoretical value of 0.5. The authors attribute this effect to surface phenomena and note that the synergy between the amorphous and crystalline phases play an important role in the overall impressive rate performance.

The researchers report on their synthesis mechanism for the nanowire bundles and their performance as anodes in full details in their publication, and are confident of its future potential in large-scale production.