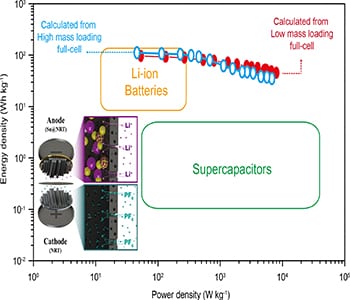 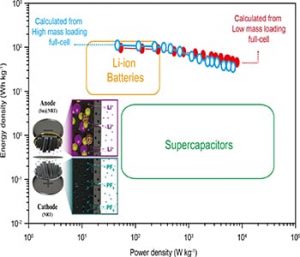 Currently, the dominating electrochemical energy storage method is still a lithium-ion battery (LIB) with its high energy density, however an electrochemical capacitor (EC) with high power density along with robust cycle life has great potential for many energy storage devices. Meanwhile, it was found that the sole usage of a LIB or an EC could not give simultaneously high energy and power densities because of their complementary ion storage mechanisms. A lithium-ion hybrid capacitor (LHC) is one of the promising energy storage methods, as it could take advantage of both LIB and EC energy storage mechanisms in conjugation with the battery-type anode, along with the capacitor-type cathode.

However, other challenges exist to realize a high-performance LHC due to several obstacles, such as kinetic imbalance and poor capacity in the full-cell configuration of anode and cathode electrode materials. For example, the use of a commercial cathode, such as activated carbon, gives poor ion absorption/desorption capacity to its electrical double layer, thus leading to low specific capacity in a full-cell device. Similarly, an ion insertion-type anode material has been observed to give a low specific capacity to the LHC in a full-cell configuration. Meanwhile, a certain metal capable of leading to an alloying reaction is one of the great candidates to realize the anode electrode for a LHC if it has a high theoretical specific capacity, but it typically suffers from its large volume expansion during an alloying reaction. This in turn leads to the fast fading of capacity, thus resulting in short cycle life. One approach to overcome these drawbacks is to reduce the average size of crystalline particles for the electrode, as ultra-fine particles could mitigate the strain induced by a large volume change. The problem is that even ultra-fine metals on a simple substrate could be agglomerated during repeated redox cycles, thus eventually causing capacity fading during repeated discharge/charge cycles. Accordingly, a new electrode architecture or methodology, which enables the prevention of the agglomeration of metal particles, and thus enabling robust capacity retention during repeated redox cycles, would represent a breakthrough in the realization of high-performance electrochemical energy storage devices.

Researchers from the Korea Center for hybrid materials interfaces and artificial photosynthesis have demonstrated high-performance hybrid full-cell capacitors on new paradigm structures for anode and cathode electrodes, where metal-encapsulated nitrogen-rich nanotubes (NRTs) and pristine NRTs have been employed as negative and positive electrodes of a hybrid capacitor. Indeed, assembling the negative electrode with the positive electrode is shown to exhibit an energy density exceeding that of even a supercapacitor more than tenfold, together with excellent capacity retention over a robust cycle life. In addition, the maximum power density achieved was about 100-fold higher than those of commercial LIBs. These results support the idea that assembling the NRT cathode with many metal encapsulated anode structures could pave a new route to creating hybrid full-cell energy storage devices, requiring both high energy and power densities over long repeated charge/discharge cycles, in addition to the design of a new class of high-performance energy storage structures.