Hybrid energy system is an alternative to FRET

Scientists from the University of Southampton have developed a new hybrid energy transfer system that mimics the processes responsible for photosynthesis. 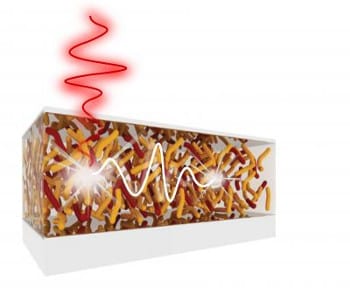 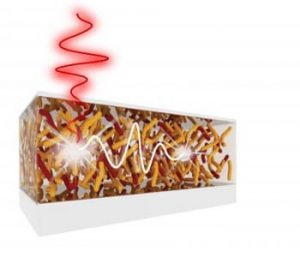 Scientists from the University of Southampton, in collaboration with the Universities of Sheffield and Crete, have developed a new hybrid energy transfer system that mimics the processes responsible for photosynthesis.

From photosynthesis to respiration, the processes of light absorption and its transfer into energy represent elementary and essential reactions that occur in any biological living system.

This energy transfer is known as Forster Resonance Energy Transfer (FRET), a radiationless transmission of energy that occurs on the nanometer scale from a donor molecule to an acceptor molecule. The donor molecule is the dye or chromophore that initially absorbs the energy and the acceptor is the chromophore to which the energy is subsequently transferred without any molecular collision. However, FRET is a strongly distance dependent process which occurs over a scale of typically 1 to 10 nm.

In a new study, published in the journal Nature Materials, the researchers demonstrate an alternate non-radiative, intermolecular energy transfer that exploits the intermediating role of light confined in an optical cavity. The advantage of this new technique which exploits the formation of quantum states admixture of light and matter, is the length over which the interaction takes places, that is in fact, considerably longer than conventional FRET-type processes.

Co-author Dr Niccolo Somaschi, from the University of Southampton’s Hybrid Photonics group (which is led by Professor Pavlos Lagoudakis, another co-author of the paper), says: “The possibility to transfer energy over distances comparable to the wavelength of light has the potential to be of both fundamental and applied interest. Our deep understanding of energy transfer elucidates the basic mechanisms behind the process of photosynthesis in biological systems and therefore gets us closer to the reproduction of fully synthetic systems which mimic biological functionalities. At the fundamental level, the present work suggests that the coherent coupling of molecules may be directly involved in the energy transfer process which occurs in the photosynthesis.

“On the applied perspective instead, organic semiconductors continue to receive significant interest for application in optoelectronic devices, for example light-emitting or photovoltaic devices, in which performance is dependent on our ability to control the formation and transport of carriers in molecular systems.”

The new device consists of an optical cavity made by two metallic mirrors which trap the photons in a confined environment where two different organic molecules reside in. By engineering the spacing between the mirrors based on the optical properties of the organic materials, it is possible to create a new quantum state that is a combination of the trapped photons and the excited states in the molecules. The photon essentially “glues” together these quantum mechanical states, forming a new half-light half-matter particle, called polariton, which is responsible for the efficient transfer of energy from one material to the other.