How wildfires are pushing mountain lions toward riskier behavior

What lessons can a threatened mountain lion population living within the bounds of Los Angeles teach about the future of conservation? 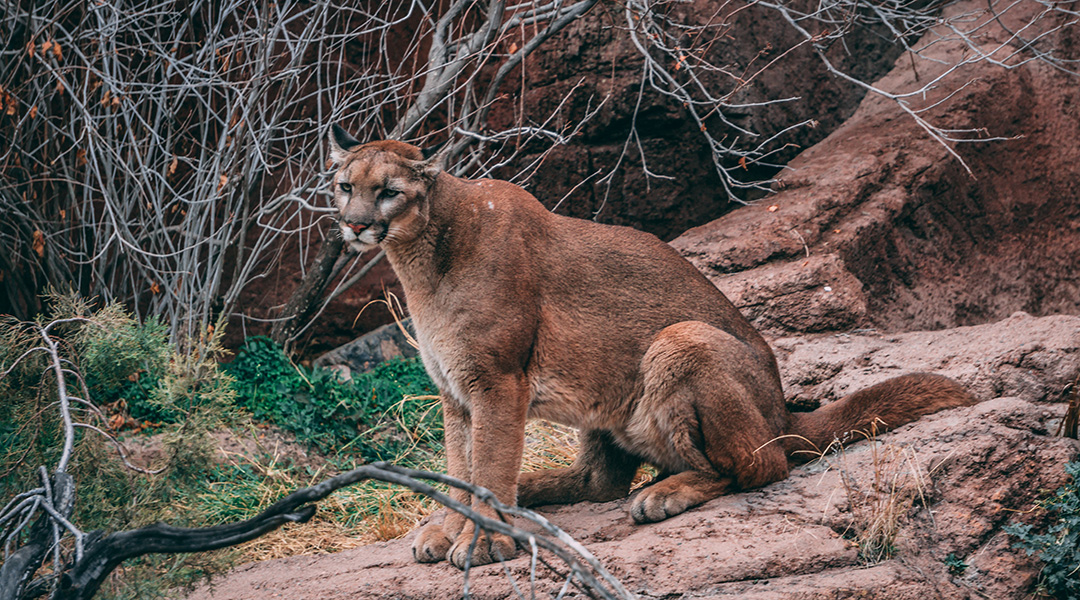 Los Angeles — a bustling megacity in fire prone southern California is home to millions of people, the busiest freeway in the US and a threatened population of mountain lions. Squeezed in-between the urban sprawl and major roadways, these solitary animals find themselves in conflict with humans and each other.

In 2018, the situation got worse when the large Woolsey fire ripped through the area. Not only did two lions perished in the fire, but it caused dramatic changes to the landscape, forcing the lions to choose between risky and riskier behaviors.

Not enough space in the big city

Mountain lions need space. One of the biggest threats to juvenile males is running into the dominant male though conflict between males and females too is common. These large predators also need large territory with enough prey to survive on, and, this territory must also be connected, allowing the lions to move freely, undercover, stalking prey. Importantly too they need to find and breed with other populations.

The Los Angeles lion population has been studied for 20 years, and according to Rachel Blakey, who worked on this population as a postdoctoral fellow with the LA Kretz Center for California Conservation Science, is showing signs of inbreeding. “That includes kinked tails, an undescended testicle in one case, and abnormal sperm,” she explained, “things that we really haven’t seen since the Florida panther, which is famously the most genetically inbred mountain lion population ever.”

Given these challenges, when the fire broke out in 2018 Blakey and her colleagues knew this was going to impact the mountain lions.

“In Southern California, fires behave a little differently,” said Blakey, “they tend to just burn as a uniform high severity fire and that’s just the way they are, that’s normal. But what that means is that it takes out pretty much all the structure in the landscape.”

This means less cover for the lions, leaving them two options: change their behavior or come into conflict with humans or each other. Surprisingly, as Blakey reports in the journal Current Biology, the cats appeared to choose a little of both.

Compared to pre-fire data, the lions where more active during the day and risked more freeway crossings. Daytime activity is not normal for mountain lions, who prefer to hunt at dusk, dawn, or at night. This shift could be the cats extending their hunting times due to a lack of food, said Blakey, but it also increases the odds they run into a human.

When it came to dangerous road crossings, in the 15 years before the fire, researchers saw a lion cross the 101 — a ten-lane freeway — about once every two years. This increased to once every four months after the fire. They also increased the amount of distance they travelled and space they used, which meant a greater risk of running into another lion’s territory.

Blakey recounts the story of one young male, named P61, which encapsulates these no-win choices. “He was the first recorded mountain lion to cross the 405,” Blakey said, which happens to be the busiest road in the US.

After successfully crossing, he encountered another male and was chased off. “Not long after that, he was seen approaching an underpass where he could have potentially crossed safely but there was some human machinery and activity there,” said Blakey. Stuck now between an aggressive foe and the humans, he attempted the freeway crossing again, this time unsuccessfully.

“This story, to me really kind of sums up that interplay of those choices that mountain lions are making around quite scary prospects like being killed by humans in whatever way in this case road crossings or getting into conflict with an adult male mountain lion,” remarked Blakey.

Behavioral ecologist Justine Smith wrote about how these scenarios are made worse because wildlife lack the ability to assess the risk of the human world appropriately. Data shows lions judge urban environments to be quite risky.

In Blakey’s work even after being squeezed by the fire the cats avoided high density urban zones. In reality these areas may be less risky than less urbanized intermediate zones. Humans living here are more likely to report the lions’ killing livestock or pets for example, resulting in the state moving in to catch and kill the large predators. Similar misguided risk assessments may have played out with P61.

Was an encounter with some workers in the underpass riskier than chancing the traffic?

Connectivity and the future urban wildlife

“This confluence of urbanization and changing fire regimes is going to continue to be an issue for biodiversity that we live alongside in cities,” said Blakey. For her, the main way we can help is increased connectivity. Right now, work is underway on the world’s largest wildlife overpass over the 101-freeway.

For Blakey, this study also highlights how disruptive disturbances, such as fires, really are. “We often say, okay well, there’s this big fire, it killed X number of koalas, this is terrible, but what does that mean going forward? And are there you know, additional risks or additional effects of such a large disturbance event that’s going to follow populations into the future.”