How is spacetime altered by entangled particles?

A new thought experiment explores the interface between quantum mechanics and general relativity using the transfer of information. 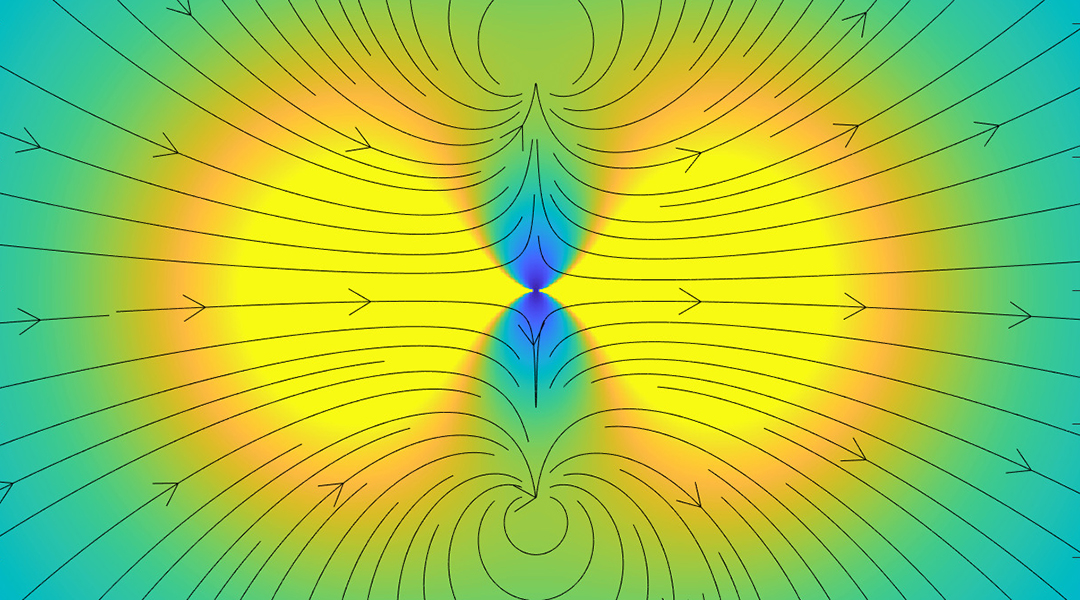 One of the most fascinating phenomena in nature predicted by quantum mechanics is the concept of entangled particles. In essence, if two or more particles were once in contact, they keep storing information about each other even if they are separated by arbitrarily large distances. What is even more incredible is that manipulating the state of one particle seems to immediately change the state of both particles — Albert Einstein called this “spooky action at a distance”.

This action must be very special because instantaneous change of the state of one particle caused by a manipulation of the other should not be immediately observable as this would violate a fundamental principle of physics which states that no signal can travel faster than the speed of light.

A group of physicists from the Technion and Bar-Ilan University have used this principle to analyze entanglement between two spinning elementary particles and the gravitational field they create in order to put constraints on the yet-to-be-found theory of quantum gravity — a description of gravitational fields based on the principles of quantum mechanics.

“Quantum mechanics accurately describes the physics of small objects where general relativity describes the physics of large objects,” explained Ido Kaminer, associate professor in the Department of Electrical and Computer Engineering at Israel Technion – Israel Institute of Technology. “There should be an important link between the two, which is currently not fully understood.

“This missing link could help us resolve many puzzling issues, such as the physics of compact astrophysical objects where the effects of gravity are extremely strong, such as neutron stars and black holes,” he continued. “This link may also help to solve the notorious measurement problem relating to the boundary between classical and quantum mechanics. Thus, to fully understand the universe and how it works we need a unified theory.”

As the accuracy of current experiments is too low to measure the gravitational field created by a single particle, the scientists developed a thought experiment to explore how a particle’s spin is coupled to either the classical or quantum description of spacetime. “In particular, the spin is believed to be a source of gravity and is expected to create a minuscule curvature of spacetime or its quantum analogue,” wrote the authors.

“There is currently no consensus about the type of gravitational attraction emerging from the spin of elementary particles,” added Kaminr. “It has also not yet been determined how gravity is mediated – perhaps is it mediated with gravitons or perhaps there is a completely different, yet unknown principle.”

In the thought experiment, a set of hypothetical clocks are placed symmetrically around an elementary particle labeled particle A. According to general relativity, a particle with a specific spin deforms the spacetime around it in a very special way such that the clocks’ pace would change depending on the clock’s location.

Most approaches to quantum mechanics claim that a particle’s quantum properties may acquire a definite value only upon measurement, and before this, it may exist as a superposition of all possibilities. However, in a pair of entangled particles, when one of the particles’ properties, such as spin, is measured, the spin of the other particle must immediately become known and be correlated with the first particle. The thought experiment shows that the measurable spacetime around the particles cannot determine an entangled particle’s quantum state or else information can be transmitted faster than the speed of light, causing other paradoxes within the basic laws of physics, such as violating the no-cloning principle in a different variant of the thought experiment.

“Our thought experiment allows us to test existing, as well as future models of quantum gravity,” said Kaminer. “It asserts that these models must contain some form of a censorship mechanism preventing the violation of relativistic causality — that no signal can travel faster than the speed of light.”

If particle A with the clocks is entangled with particle B located arbitrarily far away and whose spin has not yet been measured, the spin of the particle with the clocks doesn’t have a definite direction. According to quantum mechanics, when the spin of particle B is measured and the direction of its spin is defined, the spin of its entangled partner will immediately also become known if measured in the same direction. According to certain theories of quantum gravity, this change from a state of superposition to a definite value would change the clocks pace.

This would mean that information has been transmitted faster than the speed of light, which is a violation of the fundamental relativistic principle, signaling an inconsistency between some of our current theories of quantum mechanics and gravity.

To overcome this paradox, the authors of the study postulated a new principle that they call “spin-spacetime censorship”, which puts forward the idea that the gravitational field generated by a spinning particle cannot give information about its spin direction (otherwise, it would have been possible to determine if the spin of its entangled partner had been measured). This new principle is general, they say, and must be obeyed by any theory that governs the interaction of spinning particles and spacetime.

According to some theories of gravity, such as general relativity, our current understanding of spin-spacetime interactions is inconsistent with the principle of spin-spacetime censorship. The physicists proposed ways around this. First, they noted that a spinning particle alters the spacetime around it through an electromagnetic field created by the spinning particle. By carefully describing the interaction between the electromagnetic field and gravity around the particle, one could make the imaginary clocks’ pace insensitive to the spin direction, and thus avoid any inconsistency.

Another way of avoiding a paradoxical conclusion is to assume that these quantum effects force the gravitational field to fluctuate even around a static particle, similar to observed quantum fluctuations on electromagnetic fields. These fluctuations would make the precise measurement of the clocks’ paces theoretically impossible.

“Our analysis reveals constraints on classical and quantum descriptions of gravity, while also providing us with hints as to how to amend them and/or develop new ones, which restore relativistic causality,” said Kaminer. “Specifically, we show that certain mainstream approaches to quantum gravity would have to be modified to correctly account for the quantum properties of the spin.”

Finding guiding principles to construct the theory of quantum gravity is very important, especially given that existing instruments’ sensitivity make it currently impossible to carry out relevant real-world experiments. For any potential theory of quantum gravity to be valid, we can now first check that it passes the spin-spacetime censorship test.