Holograms that can interact with the real world

Researchers create a holographic system which users can freely and physically touch without the need for any intermediary devices. 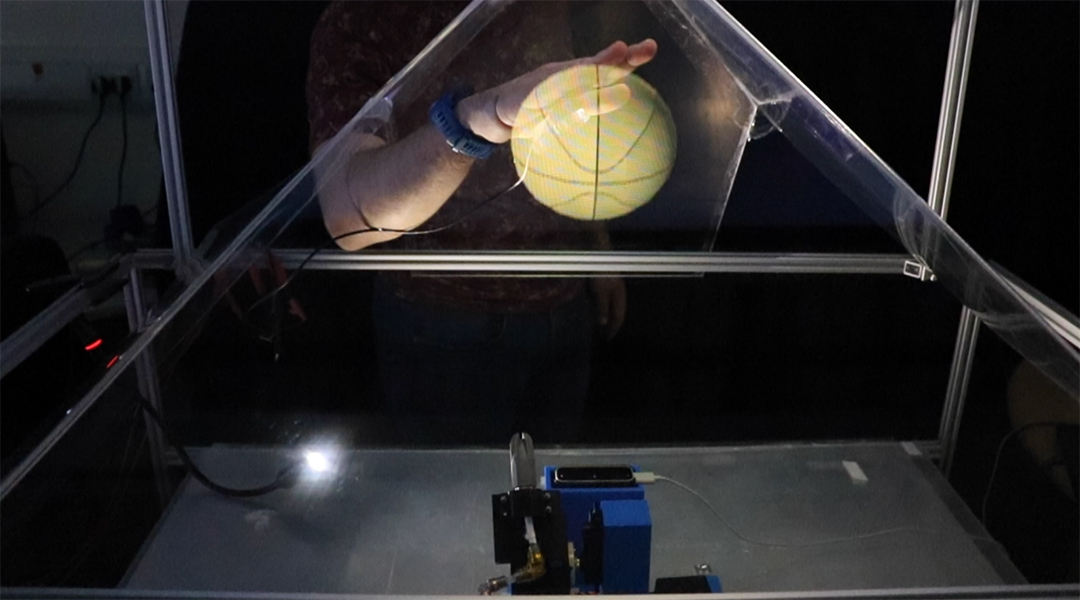 Life-like holograms were once a dream in popular science, but now recent advancements in light and display technologies are making them a reality. Researchers at the University of Glasgow want to take this a step further by making them more physically interactive.

Led by Professor Ravinder Dahiya, the team created an air-based device that responds to touch, a method named aerohaptics. “It delivers mid-air tactile feedback while the user is manipulating virtual objects within a pseudo-holographic display,” wrote the team in their paper, recently published in Advanced Intelligent Systems. The device does not require the use of any wearable or handheld devices.

As this technology progresses, virtual environments are becoming more sophisticated, finding more application in fields ranging from entertainment to psychology. Haptic feedback devices, which use touch as a form of communication, have potential to integrate with virtual reality for a more immersive and interactive user experience. “Much like computer monitors allow us to see and interact with virtual worlds [visually], haptic feedback devices add a new layer of interaction, allowing us to touch virtual objects,” said Radu Chirila, one of the study’s authors.

“As with conventional displays, interacting with them can be done with peripherals — mice, joysticks — as well as touch surfaces,” explained Adamos Christou, the study’s first author. “However, because of the visualization in three dimensions, more life-like means of interaction are quite attractive.”

The researchers created their interactive “pseudoholographic” display using a nozzle that directs bursts of controlled air to specific locations on the user’s hand. In other words, imagine bouncing a virtual basketball and it feeling like the real thing!

To do this accurately, they tested their display system on a number of different users with different virtual reality experience to quantify different interactions.

“The desire to push virtual interaction research forwards, being able to feel holograms and interact with 3D objects in mid-air is a step towards a future in which physical presence is not a limiting factor to human interaction,” said Dahiya. “During the global pandemic, we understood how essential the social aspect of life is, and saw it as an opportunity to focus our research in a direction that can make a positive change in the world.”

The holographic system brings together features that were only ever implemented separately, say the team, such as 360° viewing angles, “at-location” interaction, and haptic feedback without needing an intermediary device. Dahiya foresees application beyond just making VR simulators more realistic, but also in educational and training purposes where learners could better visualize, feel, and understand complex or abstract systems, like the body.

Dahiya says they will continue to development their aerohaptic system, improving resolution and adding more functionality, such as temperature, to the holographic objects. “Additionally, we will try to integrate hyperrealism and more complex virtual environments, which take advantage of the technologies we develop at Bendable Electronics and Sensing Technologies (BEST) group,” he concluded.