Researchers from the Suzhou Key Laboratory of Green Chemical Engineering, Soochow University, and from the State Key Laboratory of Molecular Engineering of Polymers, Fudan University, develop a one-step, solvent-free method to prepare a high-performance heterogeneous catalyst. The cobalt-based catalyst is highly dispersible in water and is effective for the tandem sodium borohydride dehydrogenation and nitrobenzene hydrogenation at room temperature. 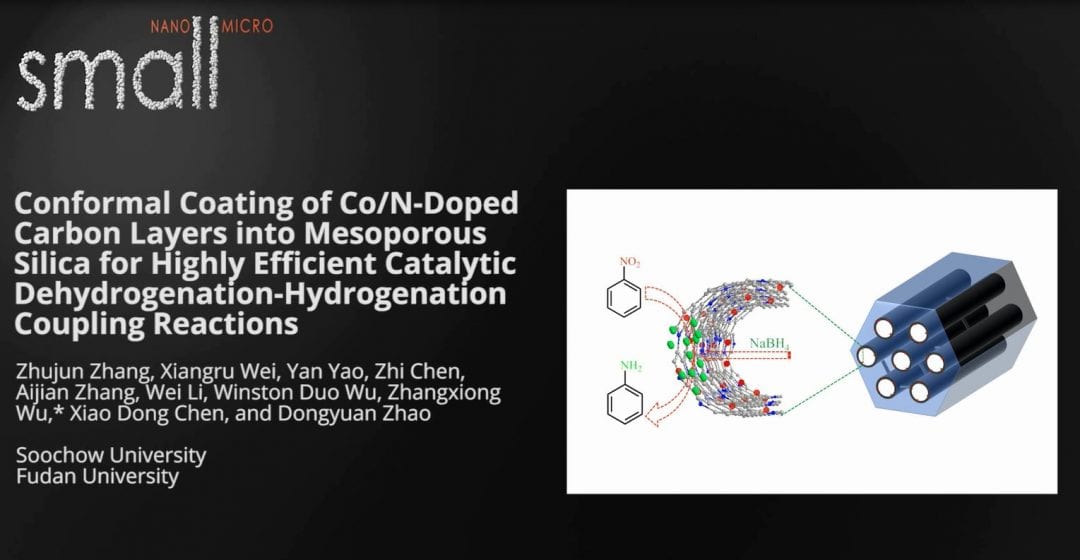 The production of dyes, pharmaceuticals, food additives, and fine chemicals mostly rely on reactions that involve heterogeneous catalysts. However, the reaction usually requires high temperatures and pressures, and the catalysts are typically based on expensive noble metals, such as gold or platinum.

In an article in Small, Zhangxiong Wu and his group from the Suzhou Key Laboratory of Green Chemical Engineering, Soochow University, along with their co-workers from the State Key Laboratory of Molecular Engineering of Polymers, Fudan University, develop a one-step, solvent-free method to prepare a high-performance heterogeneous catalyst that is highly dispersible in water.

During the grinding process and heating at temperatures below 300 °C, the histidine molecules coordinate with Co(II) ions to form a coordination complex. The solid mixture can be driven into the mesopores of the silica support (SBA-15) by capillary forces. The strong adhesive interaction between the histidine molecules and the surface hydroxyl groups of the silica support allow the catalyst precursor to spread along the SBA-15 mesochannels, and the cohesive forces allow packing into layers, which coat the inner mesopores.

During the pyrolysis phase (heating between 600 and 1000 °C), the histidine/cobalt complexes are converted into ultra-small, metallic Co nanoclusters intercalated with N-doped carbon layers (NCLs).

When tested in the tandem sodium borohydride dehydrogenation and nitrobenzene hydrogenation at 25 °C, the novel catalyst can completely and selectively convert the nitrobenzene molecules to aniline in only 3 minutes, with high turnover frequencies of up to 6.06 mol nitrobenzene per mol of catalyst.

For a commercial Pt/C catalyst, 83% of nitrobenzene can be converted to aniline in 2 minutes, but then the reaction becomes sluggish. The control sample (Co-CL@SBA-15-700), which uses sucrose as the carbon source instead of histidine, converted only 90% of aniline after 60 minutes.

The activity of the catalyst in the tandem reaction is well-retained after eight consecutive cycles, where the slightly increasing reaction times can be attributed to loss of catalyst during the recycling process. The spent catalyst can be easily recovered by a magnet between each cycle.

To find out more about this promising catalyst, please visit the Small homepage.