Fabricated nanorods are not only straight and tall (at least by nano-standards), but also have an optimal crystal structure. 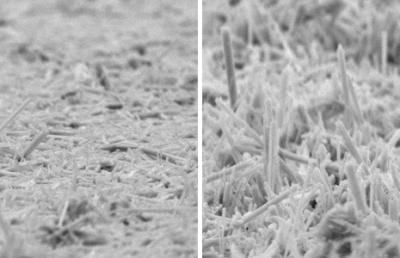 A new process for growing forests of manganese dioxide nanorods may lead to the next generation of high-performance capacitors.

As an energy-storage material for batteries and capacitors, manganese dioxide has a lot going for it: it’s cheap, environmentally friendly and abundant. However, chemical capacitors made with manganese dioxide have lacked the power of the typical carbon-based physical capacitor. Michigan Technological University scientist Dennis Desheng Meng theorized that the situation could be improved if the manganese dioxide were made into nanorods, which are like nanotubes, only solid instead of hollow. However, a stumbling block has been making manganese dioxide nanorods with the right set of attributes. Until now, researchers have been able to grow nanorods that either have the best crystalline structure or were aligned, but not both.

Now, Meng’s research group has developed a technique to grow manganese dioxide nanorods that are not only straight and tall (at least by nano-standards), but also have the optimal crystal structure, known as α-MnO2.

This minimizes the internal resistance, allowing the capacitor to charge and discharge repeatedly without wearing out. That’s a recipe for a better capacitor: it can store more energy, extract that energy more quickly, and work longer between rechargings. Plus, it can be used over and over again. Even after Meng’s group recharged their capacitor more than 2,000 times, it was still able to regain over 90 percent of its original charge.

Meng’s device belongs to the family of chemical, or reduction-oxidation, capacitors. They are hybrids between physical supercapacitors, which release a burst of energy and discharge quickly, and batteries, which generally store more energy and release it gradually over a longer period. Typically, chemical capacitors have more energy and less power than the physical ones.

The chemical capacitors made with Meng’s manganese dioxide nanorods offer the best of both worlds: they hold more energy, like a battery, plus they yield even more power than a comparable carbon-based physical capacitor.

His team was able to grow a nanoforest of manganese dioxide nanorods using electrophoretic deposition, a technique in which small particles are deposited on a substrate under the influence of an electric field. The process is not especially difficult. “We did it in a lab, but this is scalable manufacturing,” he says. “We can continuously print it out in a roll-to-roll manner, and you can make the substrate very large if you like.”

Capacitors made with manganese dioxide nanorods could help hybrid and electric vehicles accelerate more quickly or could be coupled with solar cells. “The process also opens the door for many other applications, not just supercapacitors,” says Meng.