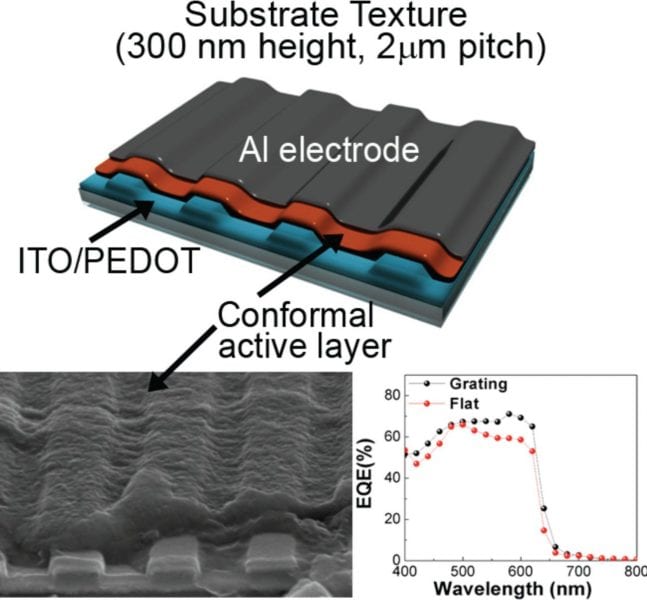 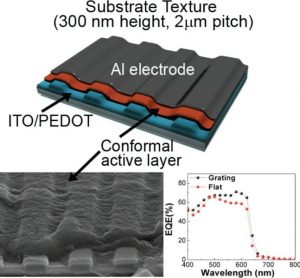 Sumit Chaudhary and co-workers from Iowa State University have demonstrated that design optimization of the textured substrate leads to polymer-based solar cells that allow efficient light trapping without compromising the electrical characteristics.

Organic photovoltaic (OPV) devices have seen tremendous progress in recent years. In particular the optimization of processing parameters and the synthesis of “tailor-made” conjugated polymers have led to improved power conversion efficiency (PCE), with PCE values of over 7% having been published recently.

The OPV devices of choice currently are bulk heterojunction (BHJ)-type solar cells in which the active layer is coated as a blend of donor and acceptor materials that phase-separate after casting. The active-layer in BHJ-type cells largely overcomes the mismatch between the exciton diffusion length ( about 10 nm) and optical absorption length ( more than 100 nm), but unfortunately BHJ-type active layers still exhibit a mismatch between the optical absorption lengt

The challenge is thus to develop fabrication strategies that allow efficient optical absorption in films thinner than the optical absorption length. Part of the answer can be found in the textured substrate-based light-trapping schemes that are used in traditional inorganic photovoltaic cells. However, translating this methodology to OPVs only works if the dimensions of the underlying topography are carefully chosen. Sumit Chaudhary and co-workers discovered that a textured surface can be effectively coated with a conformal photovoltaic active layer if the height of the underlying topographical features is reduced to the sub-micrometer regime (e.g., 300 nm) and the pitch is increased to more than a micrometer (e.g., 2 µm). With this design the obtained OPV cells show a 100% increase in average light absorption near the band edge due to trapping of higher wavelength photons and a 20% improvement in PCE (in comparison to a conventional flat PV cell).

Although the authors applied spin-coating for the deposition of the photovoltaic active layer, the topographical dimensions disclosed in their study might – after further optimization – also be applied to light-management schemes using roll-to-roll coating techniques such as gravure coating.