A hemostatic material for field dressings in emergency wound treatment is made by layer-by-layer deposition of thrombin and tannic acid. 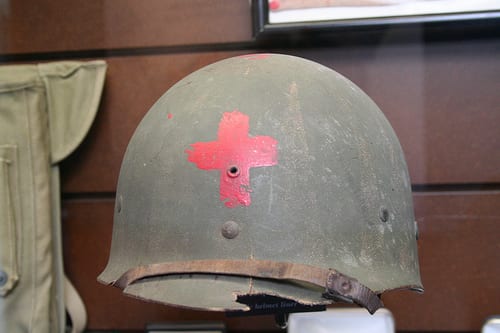 I’ve been playing a lot of Mass Effect over the holidays. It’s fun, but, as with most games, I’m epically bad at it, and the only thing that keeps me in the missions for any length of time is the convenient convention of health recovery. Skulk behind a wall or crate for a few moments, and you miraculously revitalize. Most RPGs have this convention, justified in this instance by the plot existence of your battle suit, which monitors your condition and distributes treatment as required to get you back up to full speed.

The idea of such powered armor has been hanging around in sci-fi for a good half-century, most notably in Robert A. Heinlein’s novel Starship Troopers, but in recent times has started to make the transition towards science fact through programs such as the US Army’s Future Soldier Initiative. While the complete suit may still be some distance away, some of the concepts and components are the goals of active research programs, as recent work published by Paula Hammond and her team at MIT demonstrates.

The report in Advanced Materials details development of a hemostatic material for use as field dressings in emergency wound treatment. Current practices for staunching bleeding wounds are generally based on compression (for example, tourniquets) but this can be difficult to control or even achieve in the field, depending on where on the body a wound is received. Hemostatic alternatives, which work by enhancing the clotting process) have previously been produced, but suffer from a variety of disadvantages such as expense, impractical application in field conditions, or adverse immune response.

Professor Hammond’s team have come up with an alternative that uses a layer-by-layer assembly technique to build films of thrombin (a clotting agent) and tannic acid directly onto absorbent gelatin sponges. Hydrogen bonding between the tannic acid and the thrombin allows the construction of the films without the need for any other ingredients, maximizing the load of the clotting agent, and all the materials used in the study are already approved for clinical use, so could potentially be deployed as a viable treatment system in a short time.

The thrombin load, once applied to a wound, was effective in promoting rapid clotting within one minute: a control test using uncoated, regular cotton gauze bandages and compression failed to stop bleeding from a wound over a twelve-minute period, showing this research’s very real potential to save lives in emergency situations and operating theaters.