Schoenwolf et al. focus on the crosstalk that occurs among three families of secreted proteins to progressively polarize and pattern the developing otocyst dorsoventrally. 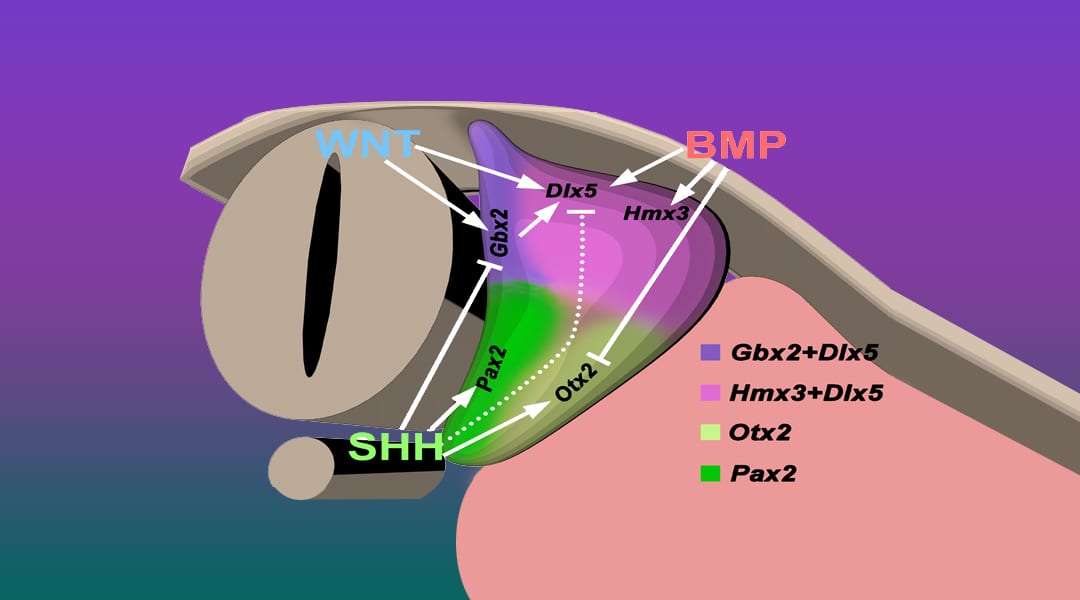 The paired inner ears, or membranous labyrinths, are structurally and functionally complex organs, each of which serves two major sensory functions in humans: balance and hearing. They originate during early embryonic development adjacent to the most caudal region of the developing brain as localized, bilateral, plate-like thickenings of the ectoderm covering the future head of the embryo. These thickenings constitute the otic placodes.

Shortly after the placodes form, each bends inward to delineate a cuplike structure called the otic cup, which quickly pinches off of the surface of the embryo to form a hollow spherical vesicle called the otocyst. The right and left otocysts are mirror-image structures and give rise dorsally to the inner ear vestibular components, which function in maintaining balance, while simultaneously forming ventrally the auditory components, which function in hearing.

Diagram showing crosstalk among secreted growth factors to regulate the expression of otocyst transcription factors and thereby establish the dorsoventral patterning of the otocyst. More here.

Morphogenesis of the otocyst to form the complex three-dimensional anatomy is regulated by small, secreted proteins consisting of major members of different growth factor families. In response to their combined temporal- and spatial-specific signaling, otocyst dorsoventral polarity is established and vestibular and cochlear structures and their sensory and non-sensory cell fates are established.

In a review article, Schoenwolf et al. focus on the crosstalk that occurs among three families of secreted proteins to progressively polarize and pattern the developing otocyst dorsoventrally. Secreted proteins evoke intracellular changes in specific dorsal and ventral otocyst regions, regulating interconnected signaling pathways to induce or suppress the regional expression of transcription factors. The latter in turn regulate the differentiation of subregions of each otocyst and determine how an initially simple organ rudiment—the otocyst—transforms into a complex organ with multiple sensory functions.