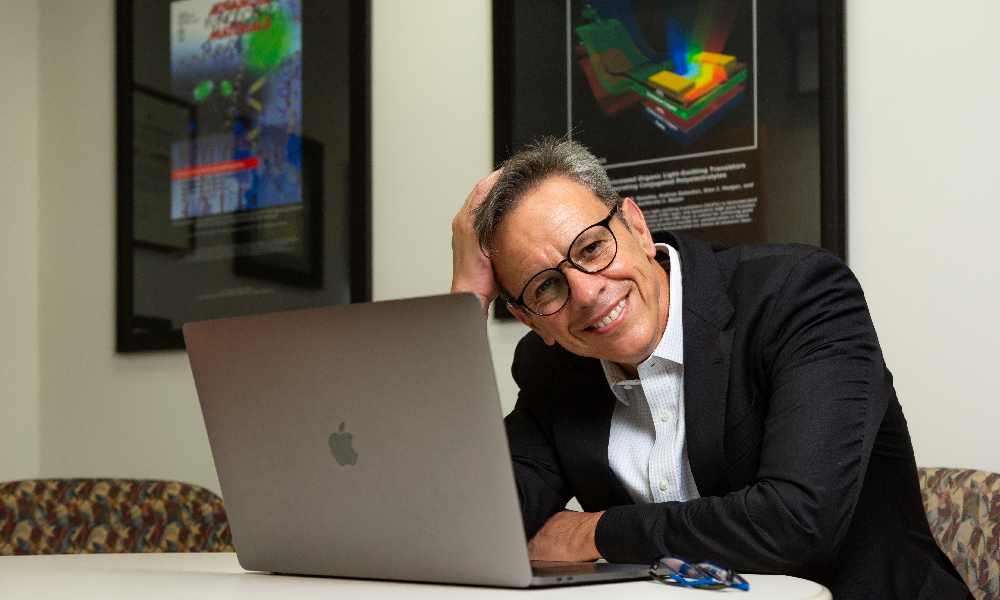 Guillermo C. Bazan is the director of the Center for Polymers and Organic Solids at the University of California, Santa Barbara where his group focuses on the molecular design and synthesis of innovative, functional materials for applications in organic electronics, bioelectrochemical devices, as well as industrially-relevant polyolefin synthesis.

After obtaining his B.Sc. from the University of Ottawa, Bazan was strongly influenced by the mentors of his Ph.D (Richard R. Schrock at MIT) and postdoc (John Bercaw at Caltech). From these “great folks to work with” as Bazan puts it, he learned many things, including a lot which you “cannot learn by yourself from reading books and the literature”. Bazan joined the University of Rochester in 1992 and then moved to the University of California, Santa Barbara in 1998.  At UCSB, he said he benefited greatly from collaborating for seventeen years with Alan Heeger whom he calls an “intellectual giant”, and who showed him how to identify solutions to key problems within systems with an enormous matrix of variables.

For Bazan, a general concern in science is scientists inability to communicate urgent topics to the general public to effectively change public policy. As an example he calls attention to the rise of antibiotic resistant infections: “There is no obvious economic incentive to gather the extraordinary resources needed to fix the problem.“

With regard to scientific communication he sees fundamental changes in the next couple of decades. “Open source publications are a good thing in general and will likely dominate how important scientific progress is disseminated.  How well-established and traditional scholarly journals manage this transition will be interesting to follow.”  With regard to the evaluation of scientists, he criticizes that “too much emphasis is placed on […] simple quantifying metrics, like the H-index.”

When Bazan is not in the lab, in the past he thoroughly enjoyed gardening. He says, “in many ways you get a chance to experiment at home, with your hands, outdoors, and in a relaxed environment”. However, the extraordinary drought in California has made this activity challenging – and Bazan sees a big challenge in how to confront climate change. For the time being he has turned his attention towards learning various styles of acoustic guitar.

As future goals, Bazan’s group is very keen to translate what they have learned on molecular design and synthesis within the context of catalysis and semiconductor technologies toward problems and applications that are more biology-centric. In particular, they seek to control and manipulate transmembrane electron transfer in anaerobic bacteria and novel chemical platforms for antibiotics that can act against pan-resistant infections.

To gain an overview of the recent developments in Solvent Additives for Solution‐Processed Organic Solar Cells, check out the comprehensive review by Bazan and his team in the Advanced Materials Hall of Fame virtual issue.

How biogas from human waste will lead to energy independence
Antibodies active against SARS-CoV-2 found in 20-year-old library
The Role of Narrative in Science
Lola Eniola-Adefeso: “When you feel you belong, everything becomes easy to tackle”