“Greening” brown ammonia no longer looks like a pipe dream

A recent advance in the Haber-Bosch production of ammonia increases conversion beyond the maximum allowed in the current industrial process. 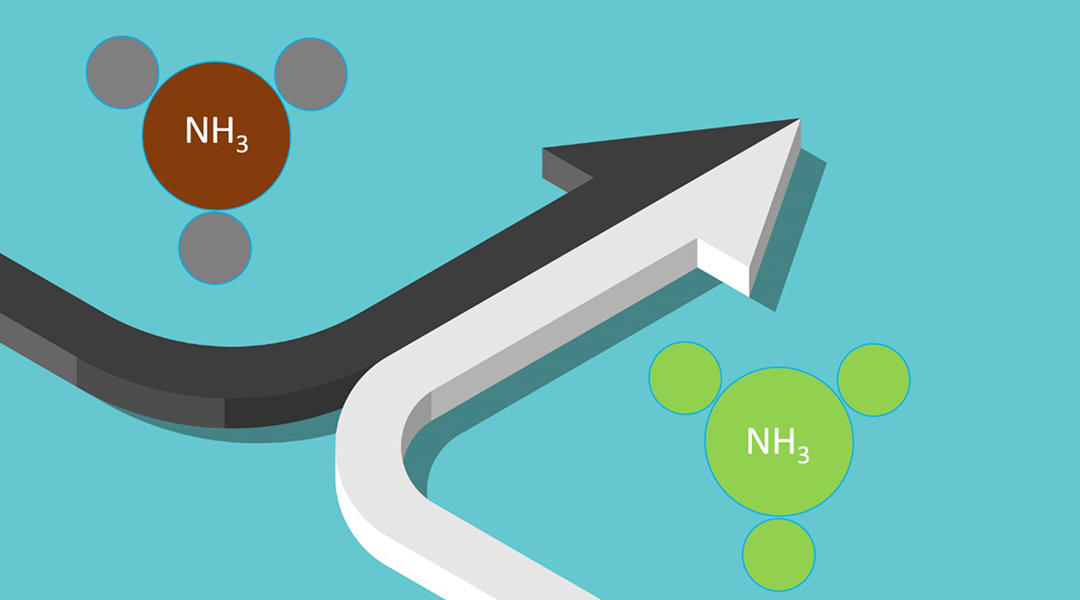 We live in a world that is highly dependent on the Haber-Bosch process in which nitrogen and hydrogen are used to create ammonia. It is an industrial scale artificial nitrogen fixation process that provides chemically and biologically usable nitrogen compounds from the inert and abundant dinitrogen atmospheric molecule.

The Haber-Bosch process produces 144 million metric tons of ammonia annually, most of which are used to accumulate elemental nitrogen in living organisms through nitrogen-based fertilizers. As much as half of the nitrogen content of proteins and nucleic acids in living organisms originate from this process. The Haber-Bosch process could also boost the manufacture of essential products such as pharmaceuticals, dyes, fibers, and explosives. Beyond these representative end uses ammonia is also envisioned as a carbon-free renewable energy vector for a sustainable economy.

The challenge is the “greening” of the energy-intensive “brown” Haber-Bosch process, which consumes 1-2% of the world’s total energy production and causes more than 1% of global annual CO2 emissions. Even when subjected to the harsh operating conditions of 500 °C and 250 atm, the conversion of N2-H2 syngas to ammonia is a mere 20%.

Milder reaction conditions and increased efficiency have been pursued for more than a century. Many studies have focused attention on developing more reactive catalysts that are workable at lower temperatures. This is inspired by a thermodynamic paradigm that a lower temperature favors the forward production of NH3 and simultaneously inhibits the backward NH3 decomposition for the exothermic N2 + 3H2 = NH3 equilibrium reaction.

A recent advance turned this paradigm on its head by placing an ammonia separation unit after the catalyst to increase the conversion beyond the maximum allowed in the current industrial process, figure 1. This maximum is predicated upon the thermodynamic reaction equilibrium limit, the result of a tradeoff between NH3 production and NH3 decomposition. Any NH3 production above the equilibrium value would be decomposed back to N2 and H2.

The core idea seems elegant in its simplicity: absorb the produced ammonia during the catalysis reaction and reduce the unreacted N2-H2 syn gas that needs to be recycled. This creative idea has been reduced to practice by replacing the conventional condenser in the Haber-Bosch process with an absorption-catalysis reactor, figure 1. The reactor configuration is based upon segregated catalyst-absorbent layers in a fixed bed flow reactor.

The conventional condenser, which follows the synthesis loop in the industrial Haber-Bosch process, cools down the effluent gas, separates the liquid ammonia, and recycles the unreacted N2-H2 syn gas through the synthesis loop; both the conversion of N2-H2 syn gas and the effluent NH3 concentration are limited by the thermodynamic equilibrium imposed on the N2 + 3H2 « 2NH3 reaction.

By contrast, in the innovative ammonia absorption separation process, the concentration of the ammonia product for the N2 + 3H2 « 2NH3 reaction is reduced, facilitating the forward reaction according to Le Chatelier’s principle. The effect of this principle can be understood by a model composed of two water tanks linked by a pipeline, one tank labeled as “N2 + 3H2” and the other labeled as “2NH3”. The gauge heights of two tanks are initially the same (thermodynamic equilibrium of a reaction), however when some water is taken from the “2NH3” tank (by absorbing ammonia product), the water from “N2 + 3H2” tank will flow therein (forcing the forward reaction). This doubles the reaction conversion rate and almost doubles the equilibrium limit although the effluent NH3 concentration is still equilibrium limited.

Another intriguing feature of this system of multiple layers of catalyst and absorbents is the downshifting of the best performance temperature of the Cs/Ru/CeO2 system from around 380 °C to 340 °C; while notable, this is still high. The performance of the integrated absorption catalysis system is readily tunable through temperature, N2:H2 ratio, and access to a wide range of catalysts and absorbents. Challenges still exist for the implementation of this new technology, as the operation principles of the Haber-Bosch process may need to be re-imagined.

One can foresee the ammonia absorption of MnCl2/SiO2 reaching saturation capacity, which would make this technology incompatible with steady-state operation. If a programmed temperature swing could be applied periodically during the operation, lower-temperature and higher-conversion ammonia synthesis might be possible. For example, high temperature triggering fast ammonia release could regenerate the absorbent and retrieve the synthesized ammonia. A non-linear NH3 desorption versus temperature procedure would be required to implement this idea, which perhaps merits further study.

As the non-renewable to renewable energy transition evolves over the next decade, this new technology could be electrified and integrated into modular Haber-Bosch units for distributed use, for example in sustainable farms. Gaseous hydrogen could be produced by water electrolysis and the overall carbon footprint of conventional Haber-Bosch could be reduced by around 80% with reductions in reaction temperature and pressure, enabling an overall higher energy efficiency of renewable Haber-Bosch ammonia synthesis plants.

“Greening” brown Haber-Bosch no longer looks like a pipe dream.

Spider-inspired joints make a leap in robotics
Using brain scans to personalize the treatment of depression
Studying quantum aspects of gravity with entanglement
No longer just solar sharing: Bringing agrivoltaics to the next level