In Advanced Materials, researchers report for the first time the application of graphitic carbon nitride derivatives for cryopreservation of biological systems. 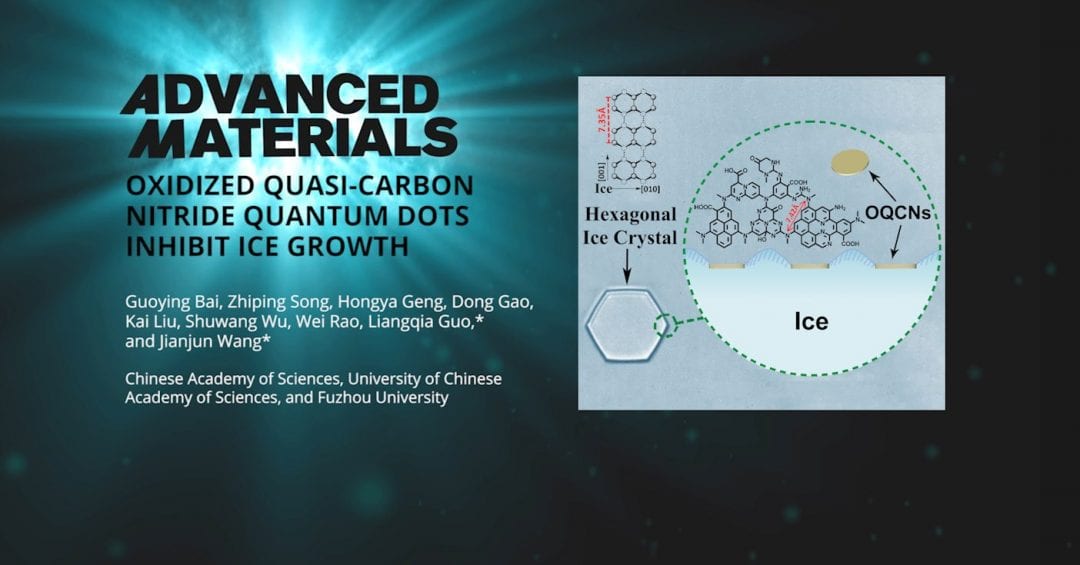 Water undergoes a beautiful transition to solid ice during winter. In contrast to many other compounds, water is less dense in solid than in liquid state, allowing ice to float. Seawater does not freeze because its high salt content lowers the freezing point. These freezing-point-lowering additives, called cryoprotectants, are crucial if the volume expansion accompanied by ice formation is to be avoided. The challenge for biological applications is to find additives without negative side effects.

In their recent communication in Advanced Materials, Liangqia Guo from Fuzhou University, Jianjun Wang from the Chinese Academy of Sciences, and their co-workers report the regulation of ice growth by graphitic-carbon nitride derivatives and successfully apply them as cryoprotectant in cell preservation.

Ice crystal growth by hydrogen bond formation can be inhibited by a structurally fitting material adsorbing onto the ice. The tertiary nitrogen atoms contained in graphitic carbon nitride possess lone pair electrons whose arrangements can be tuned to be the right distances for this task. The researchers synthesized two types of quantum dots: oxidized graphitic carbon nitride quantum dots (OCNs), which allow ice crystals to grow almost as in pure water at 0.08 °C supercooling temperature (ΔT); and oxidized graphitic quasi-carbon nitride quantum dots (or OQCNs), yielding hexagonally shaped ice crystals. This behavior is similar to that of anti-freezing proteins present in plants and insects.

While ice growth rate in aqueous dispersions of OCNs is similar to water, ice growth is prevented by different variants of OQCNs below a critical supercooling temperature. Ice affinity experiments show an adsorption equilibrium for OQCNs, confirming particle adsorption to the ice crystal surface.

Optical microscopy of splat-cooled quantum dot dispersions reveal that OQCNs inhibit the recrystallization of water during thawing. A low cytotoxicity allowed for investigating OQCNs as cryoprotectants in cell preservation. Amazingly, compared to the commercial cryoprotectant hydroxyethyl starch, the recovery ratio of sheep red blood cells from cryopreservation is improved twofold, reaching an impressive 55%.

To learn more about this promising cryoprotectant, please visit the Advanced Materials homepage.