A wearable strain sensor is developed that could sensitively respond to cyclic small strain. 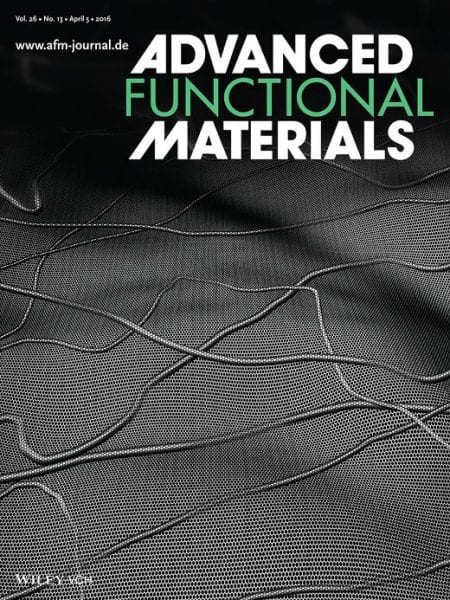 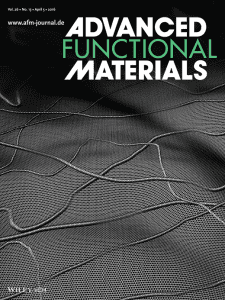 The inside front cover of this issue of Advanced Functional Materials

Flexible electronics are a significant concept in the electronics industry, and have been applied extensively in the fields of healthcare, artificial intelligence, biotics and energy storage. Specially, as an indispensable part of flexible electronics, strain sensors are widely used for wearable motion sensing and health monitoring. Randomly overlapped carbon nanotubes (CNTs), which are bonded by Van der Walls interactions, have been commonly applied to construct strain sensors. The network structure could respond to applied strain through interfacial sliding between neighboring nanotubes, which results in a homogeneous reduction of overlapping joints and a moderate increase of membrane resistance.

Inspired by the natural structure of leaves and insect wings, Dr. Xinming Li, Prof. Ying Fang at the National Center for Nanoscience and Technology and collaborators designed a hybridized structure of CNT and graphene named CNT embroidered graphene (CeG), and fabricated a wearable strain sensor that could sensitively respond to cyclic small strain. This work is published on Advanced Functional Materials and was selected as the inside front cover of the issue. 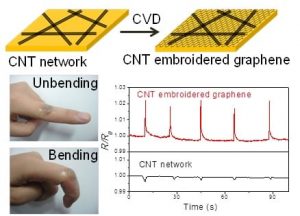 The CeG film is synthesized by a chemical vapor deposition process of graphene film using CNT network as the template. Within the nanostructure, graphene seamlessly fills the voids of CNT network. The hybridized graphene could effectively restrict the buckling process of CNT networks at the release of tensile strain and enhance the rigidity of the whole structure. The CeG films exhibit linear and reliable resistance response to strain and are applied as wearable strain sensors to detect human motions. Graphene hybridization maintains the stretchability of pristine CNT network, and remarkably improves the sensitivity and linearity in strain sensing within small strain range. This study highlights the strength and potential of smart material hybridization and provides a new material platform for wearable and implantable electronics.

(Text kindly provided by the authors of the original manuscript)