The global energy transition – do we have a Plan B?

What can we do if the IPCC's response to climate change - assessment of risk, vulnerability, mitigation, adaptation and cost - fails to deliver? 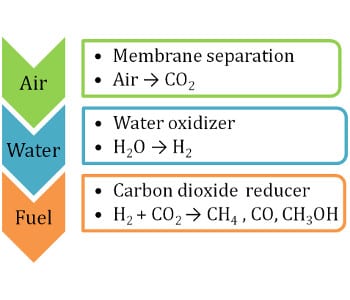 The Intergovernmental Panel on Climate Change (IPCC) reported in October 2013 that it is 95% certain humans are the cause of anthropogenic climate change from the increasing concentrations of carbon dioxide greenhouse gas emitted into the atmosphere from the combustion of fossil fuels. In March 2014 the IPCC announced that our planet now faces irreversible climate change and our only choice going forward is an assessment of risk, vulnerability, mitigation, adaptation and cost (see reference: http://www.ipcc.ch/).

Let’s refer to this ‘burn-and-adapt’ scenario as Plan A. It appears to me that what is missing from the ongoing greenhouse gas climate-change debate is a credible Plan B; namely, an alternative course of action for use if Plan A should fail.

What I mean by Plan B is a science-based solution with an accompanying action roadmap to enable a global scale energy transition from our current one – which is dependent on the finite supply of oil, coal and gas – to one founded on a new energy source that would be able to sustain a global society, particularly after the emission of an estimated trillion tons of CO2 into the atmosphere through the burning of fossil fuels (see references: http://trillionthtonne.org/, http://www.climatecommuniques.com/, http://www.carbontracker.org/).

CO2 is the thermodynamic ‘default molecule’ of fossil fuel combustion. Hence, I believe a Plan B strategy can be built around a ‘New CO2 Economy’, the premise of which is (i) CO2 is not a waste product to fear, (ii) CO2 is a bounteous carbon resource, (iii) CO2 belongs to all and (iv) through innovative chemistry CO2 could provide a sustainable supply of fuels and chemicals for the rest of time.

In the energy transition to Plan B, the fossil fuel industries can continue their exploration for oil, gas and coal in order to replenish the atmospheric CO2 feedstock. These CO2 emissions are needed for Plan B in order to maintain sustained petrochemical and chemical production using CO2 driven by light and heat from the sun. Once this transition is completed, atmospheric CO2 can provide a sustained source of feedstock for fuel production via sunlight and depletion of legacy fossil fuels from the earth could then be stopped. At steady state, a closed energy cycle can be reach whereby CO2 is converted to solar fuels, which is consumed to produce CO2, which then can be used to convert to solar fuels again.

In order to expand upon the above statement, we direct our attention to well-documented large-scale, gas-phase, heterogeneous catalytic processes which are already able to convert CO2 into fuels and value-added chemicals in the petrochemical and chemical industries. However, these processes are invariably thermally driven and require an initial input of energy. More often than not, the energy used to power these processes is usually generated through the burning of fossil fuels, either to produce electricity or heat, which in itself produces more CO2.

I would argue therefore that the infrastructure exists for the development of a global scale CO2 capture and conversion economy, which leads to recycling of CO2 from the atmosphere to fuels and value-added chemicals. It can however only be sustained until the point in time when fossil fuels are depleted and the only thing left is a plentiful supply of CO2 in the atmosphere.

What is missing in the transition from a fossil fuel based economy to one based on CO2 is a globally sustainable supply of clean energy to enable the heterogeneous catalytic processes that can transform CO2 into fuels and value-added chemicals. In this, nothing can match the massive scale, pristine nature and essentially infinite lifetime of nature’s fusion reactor, the sun.

The grand challenge for science and engineering is to discover novel materials and processes that can efficiently and economically capture CO2 and harvest both light and heat from the sun and convert CO2 into fuels and chemical feed stocks. This can be exemplified by the economically viable production of CO, CH4 and CH3OH at a relevant rate and scale.

To place this grand challenge into perspective, a conversion rate of 10 moles of CO2 per hour per gram of catalyst translates into a conversion rate of 1 gigaton of CO2 per year per ton of catalyst when placed in 250 sunny locations. In practical terms, this can be achieved through the use of 20,000 solar panels with an area of one square meter, containing a 10 micron thick catalyst film made from a MOx nanomaterial with average density of 5 g.cm-3.

One can appreciate from this ‘back-of-the-envelope’ calculation that the development of a global scale CO2 economy could readily handle the yearly global emission of 40 to 50 gigaton of CO2. This conversion rate is sufficiently high in that it can maintain a steady-state concentration of CO2 in the atmosphere as well as produce the carbon equivalent of fuels and chemicals, thereby solving our climate and energy dilemma in one fell swoop.

In this context it is worth noting that Ivanpah – the world’s largest solar thermal power station located in the Mojave Desert (http://www.brightsourceenergy.com/) – is currently producing high-value electricity and steam from sunlight. Their product is used in power, petroleum and industrial-process markets worldwide. Its deployment area of 330,000 mirrors is roughly equivalent to the surface area calculated for the envisioned CO2 conversion process mentioned above.

Integrating an earth-abundant and cost-effective catalyst with existing chemical and petrochemical industrial infrastructure could provide a practical, economical and sustainable alternative to fossil fuels and its perceived climate change consequences. The beneficiaries of this will be the oil, coal, gas, and chemical and petrochemical industries, the engines of our global economy. 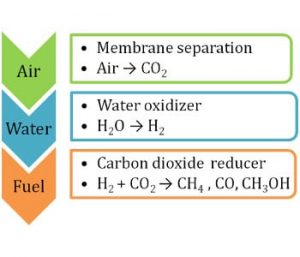 To further build upon this proposal, a Plan B vision for a sustainable future is to make the solar fuels technology (i.e. capturing and utilizing CO2 in both air and in concentrated localized sources) compatible with existing infrastructure on land and sea around the world. The scheme illustrates the envisioned air-to-fuel technology, which utilizes solar-assisted heterogeneous catalysis materials science and chemical engineering methods. The three-step process involves CO2 separation or capture. Next gaseous water is split into H2. Then this H2 is utilized to reduce gaseous CO2 to CO, CH4 and CH3OH fuels and chemicals. This model provides an example of how we can transition the most promising solar fuels materials from a laboratory scale prototype to a CO2 capture and conversion technology that will enable the creation of a new and sustainable CO2 economy. If the economics (energy and cost) and the timeline (lab-to-market) of the process both work, we may be able to circumvent the predicted consequences of greenhouse gas climate change.

What will it take to make this energy transition a reality? I believe what I have proposed is a positive message that circumvents the controversy and negativity of the climate debate. It is an appealing vision and a scientifically plausible idea that everyone would appreciate, from high school students to academics, from industrialists to investors and from economists to policy makers.

A solar fuels technology that would enable an energy transition to a sustainable future would begin as a small piece of the energy puzzle that is expected to grow overtime. The end goal is to power the world using renewable energy, with solar fuels generated from CO2 being a critical component of the energy endgame.

The goal of a new CO2 economy envisioned in this article presents a credible science and engineering paradigm, with a calculable cost, assessable risk and definable benefit over a quantifiable development time period. By contrast, the protracted climate change debate with its opposing forces appears to be grid-locked, increasing the economic and human cost of not having a credible Plan B.