Getting Bimetallic Nanoparticles in Shape for Application

Discover how iodide can be used to control the shape of bimetallic nanoparticles for application in catalysis, solar-energy conversion and therapeutics. 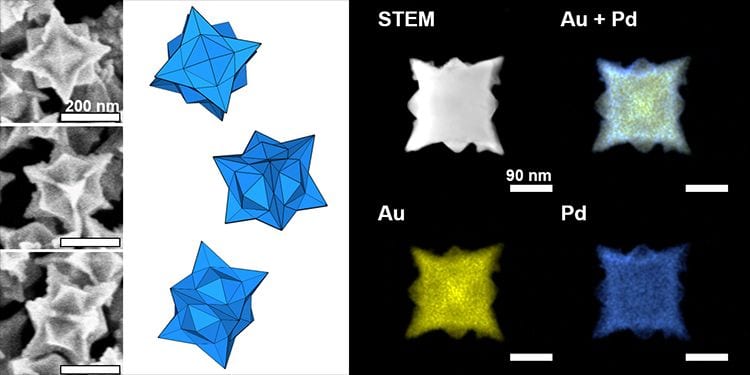 As the demand for nanoparticles, possessing highly tailored properties, increases in applications including plasmonic sensors and catalysis, new synthetic pathways that are able to generate nanostructures with intricate and stable surface features are of key importance. Bimetallic nanoparticles are at the forefront of nanoparticle research due to their applicability in catalysis, providing pathways to achieving high selectivity and activity that single metal systems are unable to provide.

New avenues for producing uniform nanoparticle morphologies with intricate surface features and bimetallic compositions are necessary to enable the more energy-efficient conversion of precursor species to value-added chemical products. King and Personick at Wesleyan University, Middletown, CT, USA have recently reported unique bimetallic mixed-curvature tetradecapod nanoparticles that possess both concave and convex features at the particle surface. As a result of these features, the particles have “high-index” surfaces with atomic steps, which are known to increase the reactivity of catalysts. What’s more, these gold-palladium alloy nanoparticles provide a new insight into the role of dilute concentrations of iodide as a shape-directing additive.

Iodide anions have often proven to be unwieldy in previously reported nanoparticle syntheses, and have commonly led to the formation of spiky particles with irregular shapes. In contrast, in the current work, King and Personick have seen that dilute concentrations of iodide ions can facilitate the reduction of palladium, thereby providing intricate and well-controlled nanoparticles. This is contrary to the accepted idea that halides inhibit the reduction of metals in solution. This insight may offer promising new avenues to bimetallic particle growth.