Getting a charge out of liquid metal batteries

Liquid metal batteries, in which both electrodes as well as the electrolyte are in liquid form, are a promising development in energy storage technologies. 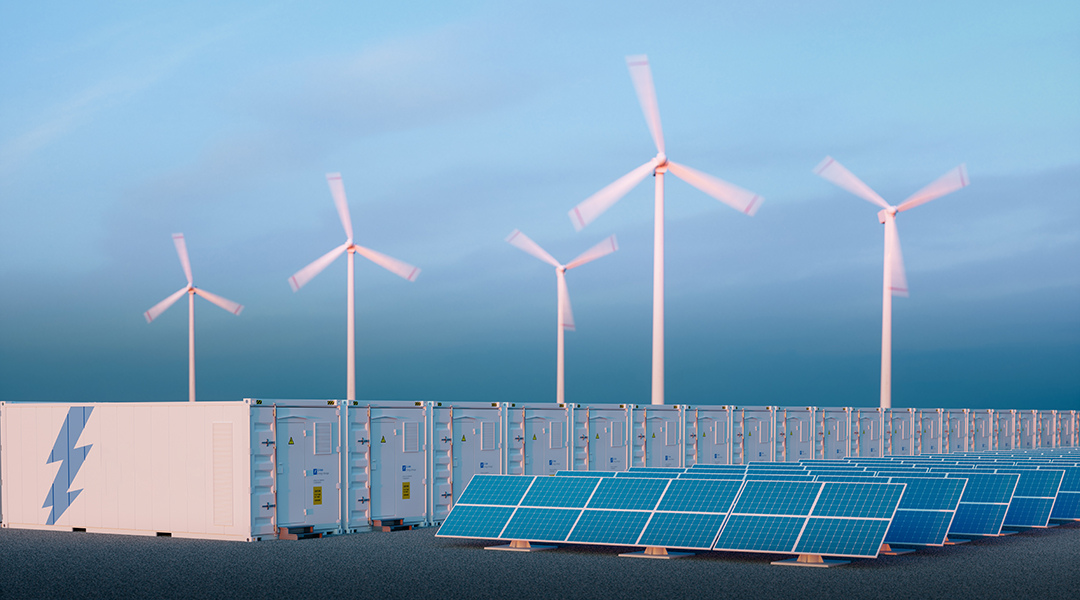 A novel concept in reversible chemical to electrical energy storage is the liquid metal battery, in which a metal anode, metal cathode, and salt electrolyte are all in the liquid phase. The upper electrode (anode) is a low-density liquid metal selected from the electropositive, electron-donor elements and the lower electrode (cathode) is a high-density metal chosen from the electronegative, electron-acceptor elements, respectively on the left and right of the periodic table. The electrodes are coupled via a medium-density molten electrolyte, sandwiched in between, that allows metal cation transport between anode and cathode, as illustrated in the figure.

The compositions are chosen so the liquid metal layers are completely immiscible with the molten electrolyte layer and do not mix during operation. The cell is loaded with layers of powdered anode, electrolyte, and cathode materials, and on heating to melting they naturally settle into three immiscible liquid layers controlled by the aforementioned density differences.  During discharge (as shown in the figure), metal electrode A loses electrons creating A+ cations that diffuse through the liquid electrolyte to enter the bottom metal electrode B. Simultaneously, charge-balancing electrons pass through the external circuit to power an electric load and enter the bottom electrode to reduce A+ to A which alloys with molten metal B. On recharging, this process is reversed. Initial start-up requires external heating, but once the battery is molten it maintains operating temperature by generating heat whenever current flows, i.e., on discharge and on charge. This battery is designed to be used on a daily basis, not to sit idle for weeks at a time. Ideally, 5 hours charge time, 7 hours idle, 5 hours discharge time, 7 hours idle, every day.

The advantages of liquid metal batteries over solid state is rapid ion diffusion between electrodes, which translates into very fast charge-discharge cycles. Also, mechanical stresses are much less as liquid electrodes and electrolytes adapt to the shape of the cell and while one liquid layer thins during discharge, the other thickens and vice versa on recharge, minimizing various forms of mechanical failure with time. Furthermore, the self-segregation of the liquid electrodes and electrolyte obviate the need for membranes and separators, and enhance long term stability and utility.

Overall, the stability with respect to cycling, the requirement for less maintenance and service, and lower materials and manufacturing costs bode well for liquid metal batteries as a competitive technology for grid storage. Furthermore, testing for thousands of cycles has shown that these batteries resist capacity fade, a malady that detracts from the use of lithium-ion batteries in this application.

Many electrode and electrolyte materials have been explored as candidates for cell components in order to optimize the operating conditions, lifetime, cost, sustainability, and scalability of the cells. Original cells were based on Mg/MgCl2/Sb, which operated at 700°C, causing energy efficiency and degradation problems. Lower melting metals were sought to bring down the operating temperature, replacing Sb with Pb, and Bi, Sn, Mg with Na, Li, Ca, and alloys thereof, achieving as much as 400°C improvements.

Overall, it seems that liquid metal batteries are more suitable for large scale electricity storage while lithium ion batteries are best used for mobile applications, which has to do with their different battery chemistries. The liquid metal battery is heavy but it doesn’t fade with use and cannot burn. The lithium ion battery is light, but flammable and with use it loses storage capacity.

An Ambri, 1000 kWh, 250 kW capacity liquid metal battery, voltage 500-1500V, response time < 500 milliseconds, and > 80% DC efficiency, which fits into and can be delivered in a 10 foot shipping container, is shown in the figure. Clearly, grid-scale storage is a key target for liquid metal battery technology as its energy storage capacity is large, delivery is fast, lifetime is long, location unlimited, and it is cost competitive with other large scale electricity storage systems.

Heating up the debate: New findings in protocell evolution
Science in pictures
What's on the table at COP26?
Reproducibility in Scientific Publishing