In their review in BioEssays, Bailey et al. present a model of a process that occurs more often than we’d suspect: identical genetic changes in evolutionarily unrelated populations. 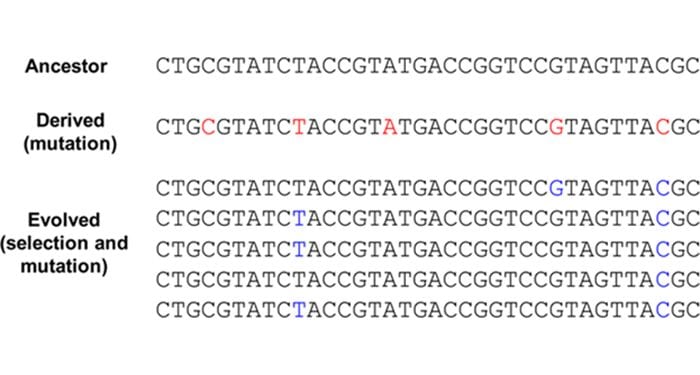 A single biological event (the incorporation of an alpha proteobacterium into the metabolism of an archaean) gave rise to the mitochondrion and hence eukaryotes (complex cells with a nucleus). There is no doubt that this happened but once in evolution. But as we move through the chronology of life on Earth, we see innovations and adaptations that have clearly occurred more than once.

Many of these are examples of convergent evolution, and as evolution proceeds to construct ever more complicated genetic networks that produce certain phenotypes, so the points in the network at which “tinkering” can change those genetic underpinnings also increases. And with more gene regulatory networks arising anyway during evolution (during the emergence of the great diversity of phenotypes in organisms), so the possibility of achieving similar results with different networks also increases (the foremost legs of a centipede evolved to become the fangs, whereas the fangs in a spider have a different developmental – and hence gene regulatory – origin).

This, as we know, leads to convergent evolution, and the genetic changes accompanying such convergence to produce similar phenotypes are overwhelmingly not the same across the similar phenotypes. But more recently, we’ve noticed that there’s much more evolution of similar traits via exactly the same genetic changes going on – and that between evolutionarily completely independent populations! This is known as “parallel” evolution, and it’s a surprise in genetic systems with many parts that could, potentially, be tweaked in different ways to produce similar results.

To get to the bottom of this phenomenon researchers are studying simple unicellular organisms (yeast and bacteria), and in this BioEssays article, Bailey et al. create a mathematical model to suggest why, and in which circumstances, such parallel evolution is favoured. Essentially, in laboratory experiments population size plays an important role in determining the balance between contributions from mutational frequency and selection in driving parallel evolution: that gives us more predictive power for identifying natural populations in which it is likely to occur.