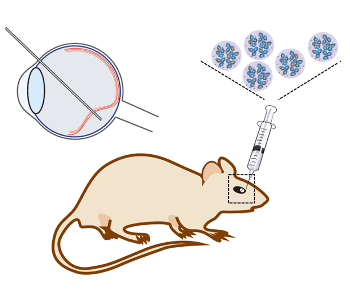 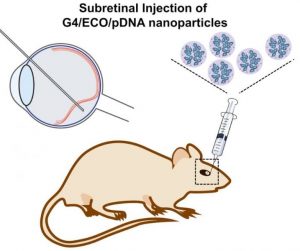 Genetic eye diseases, such as Leber’s Congenital Amaurosis, are a major cause of blindness. In genetic eye diseases, the genes responsible for transducing light into a signal that can be interpreted by the brain are mutated, resulting in vision loss. Gene therapy holds promise to treat these diseases by delivering the correct genes into the retina to reinstate normal eye function. This approach is particularly promising in ocular diseases because the anatomy and genetic defects of visual disorders are isolated and well understood. Ocular gene therapy has been translated from the laboratory into patients in clinical trials using viruses to deliver genetic cargo. These trials have demonstrated promising outcomes, however, safety concerns associated with viral-based gene therapy remain and alternative approaches must be investigated.

Researchers from Case Western Reserve University have developed an efficient non-viral gene delivery system for safe gene therapy for retinal diseases. In their hybrid nanoparticle system, DNA is wrapped around aprotein-like molecule that mimics how DNA is naturally packaged around proteins in cells. These complexes are then coated with a multifunctional lipid based on fat or oil to enhance stability and promote the delivery of the correct genes into retina cells. The hybrid gene therapeutics maximize the efficacy of gene therapy while they minimize the use of delivery materials in the nanoparticles to maintain good safety. The non-viral nanoparticles exhibit high capacity to introduce a correction gene and produce a protein with normal function both in human retinal pigmented epithelial cells and in live mouse retina. This therapy is simple to make and safer than viral-based therapies, and is a promising candidate for new treatment of genetic eye disorders.