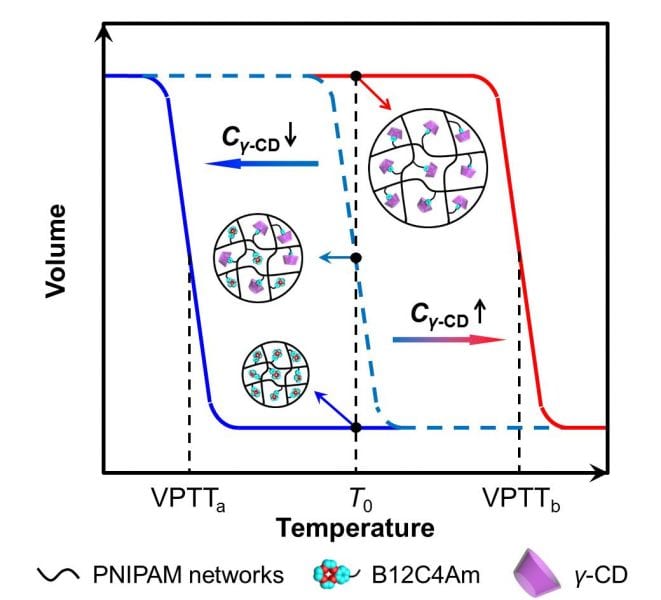 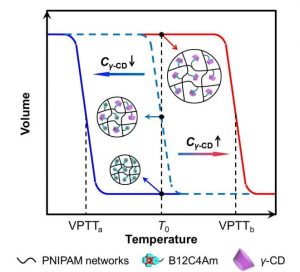 Stimuli-responsive smart hydrogels can dramatically change their volumes or other physical-chemical properties when triggered by various external stimuli, such as pH, temperature, light, certain molecules or ions. Such hydrogels show great promise in many applications including switches, adsorbents, sensors, and drug carriers.

With B12C4 groups selectively included by γ-CD, the volume phase transition temperature VPTT value of as-prepared hydrogel increases to a higher value due to the formation of inclusion complexes between γ-CD and B12C4. That is, γ-CD molecules can trigger a significant change in hydrogel volume at a specific operation temperature. Furthermore, the prepared hydrogel also shows thermoresponsive adsorption property selectively towards γ-CD. The γ-CD-recognition sensitivity of prepared hydrogel can be dramatically improved by increasing γ-CD concentration in solution or B12C4 content in hydrogel networks.

The proposed unique hydrogel is highly promising for the development of molecular-recognition sensors and switches, molecular separation systems, and so on. The design strategy of these smart hydrogels will provide valuable guidance for widening the practical applications of smart hydrogels.