Fuel for thought — The future of Martian colonization

A biorefinery built on the Red Planet could help produce rocket fuel required for a return journey, but some snags need to be worked through first. 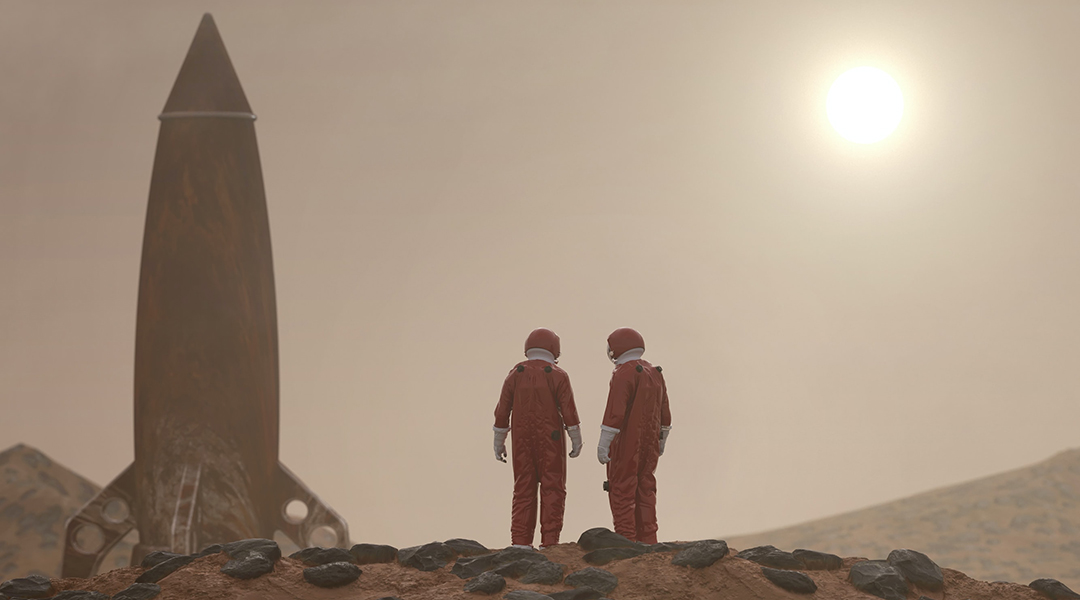 The landings of multiple unmanned rockets and vehicles on Mars were spectacular feats of human ingenuity. However, a return mission to Earth has yet to be achieved as current technologies limit the mass and volumes of fuel that can be brought at take-off.

As discussed in an earlier article, the chemistry for converting carbon dioxide (CO2) to commodity chemicals and fuels has been well-established on Earth and holds the potential to support a futuristic Martian colony.

Recently, an alternative resource utilization strategy has been proposed for producing rocket fuel on Mars in a new biorefinery to be built on the Red Planet. This set-up is shown in the figure below alongside a Mars vehicle to appreciate its scale. Notably, most of the materials and land would be used for the cyanobacteria cultivation module.

In this approach, photosynthetic cyanobacteria would transform Martian CO2, water, and sunlight into sugars while generating oxygen. The sugars are subsequently converted by engineered E.coli into 2,3-butanediol to be burned as rocket fuel.

The rationale for this oxygenated biochemical fuel is interesting and multifaceted. First, the chemical composition of the fuel is predicated on Mars’ lowered gravity of 3.73 m/s2. In comparison, Earth accelerates objects back to its surface at 9.81 m/s2. This detail allows a lower energy density fuel compared to liquid methane, an alternative to the typically used liquid hydrogen and oxygen bipropellant, to be used for take-off. Notably, take-off accounts for most of the fuel needed for the journey home.

Furthermore, the amount of oxygen required for complete combustion of 2,3-butanediol is lower than that for methane, which is useful considering the low oxygen content in the Martian atmosphere. In addition, the rocket performance per unit mass of propellant for 2,3-butanediol and methane are similar, meaning that similar energy would be needed to transport an energy-equivalent amount of fuel and is indicative of 2,3-butanediol’s efficiency.

Finally, the production of 2,3-butanediol has been estimated to be 32% less energy intensive, requiring 2.8 times less payload mass than methane, and its production process may be the key to solving the oxygen crisis in Martian colonization.

Collectively, these four considerations make 2,3-butanediol a chemical of choice for the return launch of a rocket from Mars to Earth.

But even the most well-thought-out plans have their weaknesses. First, the -60°C surface temperature on Mars is of course different to normal launch sites on Earth. Second, the higher level of ultraviolet radiation on the surface of Mars, due to its thinner atmosphere, risks genetic mutations in the fuel-producing microbes and requires extensive optical engineering to block the harmful ultraviolet without blocking the photosynthetically active visible light. This is estimated to be hindered by a further 57% due to dust accumulation from the dust storms common on Mars.

Martian water will also require pre-treatment to remove the salts not conducive to microbial activity, and will need additional nitrogen, phosphorous, and trace metal nutrients crucial to microbial growth. The nitrogen partial pressure on Mars is an order of magnitude less than required for microbial fixation, suggesting the need for Earth-sourced ammonium and phosphate to be shipped to Mars. Nuclear reactors to power the biorefinery will also need to be shipped from Earth. This additional payload mass will influence the design and engineering of the complete reactor.

There is also one additional, albeit large, snag: sending microbes to Mars is currently prohibited by the NASA Planetary Protection guidelines as a precaution against contaminating the planet. In light of the search for life in outer space, this rule was put in place to prevent the possibility of false positives from Earthen contamination.

While the biorefinery seems to have certain advantages over typical chemical refineries, physical and biological containment strategies needed to produce biofuels on a crewed mission to Mars have yet to be developed.

Despite the dreams of certain billionaires, it seems like colonization of Mars and luxury vacations to the Red Planet will have to wait a bit longer.

What's on the table at COP26?
Anthropogenic climate change accelerating faster than earlier, natural analogs
Think with your heart: A new era of biocomputing
The best way to study a lake? Float on top of it