Could a human settlement on Mars be sustained with carbon dioxide?

The chemistry of carbon dioxide may not save the human race on Earth, but could enable a new beginning for life on the red planet. 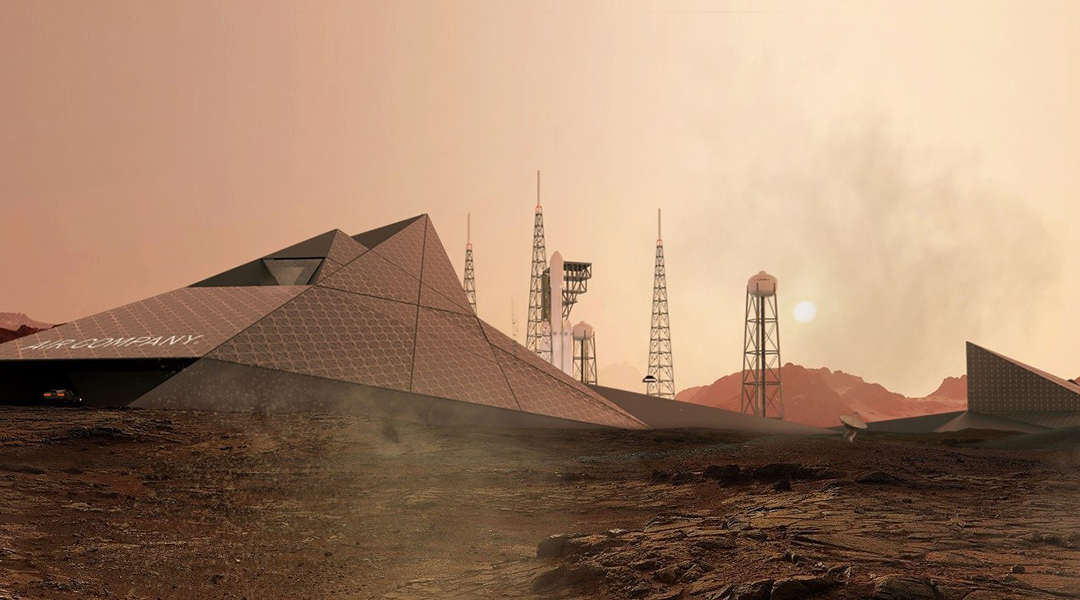 CO2-to-fuel facility on Mars, with rocket and fuel storage in the background. Graphic courtesy of Air Company

The quandary at the center of Noël Coward’s 1930’s classic comedy Private Lives arises from a dysfunctional marital relationship of a couple that can’t live with each other yet can’t live without each other. This is a reminder of the dilemma currently facing humanity with carbon dioxide (CO2) a key molecule which at the right concentrations enables the existence of life on earth now threatens its current existence as a result of increasing quantities from incessant use of fossil fuels.

A futuristic technocratic vision to overcome this problem is to escape from the predicament created by a small and powerful elite on Earth by traveling to and living on Mars, where humans will have to learn how to live in an atmosphere that is predominantly composed of CO2.

This vision of humans inhabiting Mars is now moving closer to a reality and it is imagined that CO2 can help us to not only reach, but live on the red planet. The viability of this “incredible dream” is predicated on the ability to utilize CO2 as a feedstock for making the oxygen, chemicals, and fuels required for the survival of humans under the inhabitable conditions that exist on Mars, with its atmosphere primarily comprised of CO2 (95.3%), the remainder being nitrogen (2.6%) and argon (1.9%), with an average cryogenic surface temperature of -60°C.

As an aside, even with a predominantly CO2 atmosphere the surface temperature of Mars is frigid compared to warm Earth for two main reasons, its greater distance from the Sun and because gravity is only 38% of Earth, the result is too thin an atmosphere to retain heat.

In order to rise to this challenge, two of the most well-established, large-scale, Earth-based processes for converting CO2 into chemical products have seemingly come to the rescue. They are the renowned Reverse Water Gas Shift and Sabatier reactions, both of which involve hydrogenation reactions of gaseous CO2 to form carbon monoxide (CO) and methane (CH4) respectively, expressed by the following reaction equations:

CH4 can serve as a rocket, transportation, and heating fuel, while the CO and hydrogen (H2), comprise synthesis gas, a feedstock for making commodity chemicals such as methanol, ethylene, and dimethyl ether.

Solar power would provide the electricity and heat needed to drive these chemical processes as well as electrolysis of water that is believed to exist as sub-surface ice, to produce H2 and O2. Solar thermal processes have also been perfected to produce CO and O2 from CO2, or dry reforming for converting CO2 and CH4 to synthesis gas, CO-H2.

It is abundantly clear that well-established Earth-based chemistry of CO2 for making chemicals and fuels can be effectively utilized to enable humans to establish a self-supporting community on Mars.

This brief description of how CO2 can be creatively employed as a feedstock for humans to “drive, survive and thrive” as a community on Mars is the backdrop to an exciting development at the recently established company, Air Co., that burst into the news last year with an eco-friendly vodka made from CO2 in a distillery in Brooklyn, New York.

The industry and market for products made from CO2 is anticipated to boom in the coming decades, and companies bringing forth new innovations based in CO2 utilization and recycling are finding themselves in the spotlight.

Air Company, which is driven to defy the impossible, has invented a way to make renewable fuel from carbon dioxide. The catalytic reactors to enable the process were designed, engineered and constructed in a Canada-USA collaboration involving Zeton and Air Company.

Until now, rocket engines have used liquid methane made from natural gas, an unsustainable, non-reusable fossil fuel product. However, in the fight to protect the environment while furthering space exploration, organizations like SpaceX and Blue Origin have begun to look for new propellants for their rocket engines for commercial spaceflight and Mars exploration. That is where Air Company comes into the picture with a CO2-based technology that is able to not only transport rockets to Mars but can also be used to make fuel on Mars for a return trip to Earth as well as an energy supply for enabling life to be sustained.

For every launch, if Air Company’s rocket fuel made from CO2 as feedstock is used, 715 tons of CO2 would be prevented from being emitted into the atmosphere. That’s the equivalent of around 10 New York to Los Angeles trips on a 747 plane.

One sobering thought; all the chemistry of CO2 to make chemicals, polymers, pharmaceuticals, materials, and fuels we have invented on Earth may not save the human race on the Blue Planet but it could enable them to create a new beginning for life to survive on the Red Planet.

Nevertheless, let’s celebrate the great accomplishments of Stafford Sheehan and Gregory Constantine, founders of Air Company, with a glass of their home-made vodka made from CO2, to rejoice in this science and engineering advance, another step towards a sustainable future on both the Blue and Red planets, Earth and Mars.

Tetraneutron finally found
The paradox of dormancy: Why sleep when you can eat?
Electro swing direct air capture
Your brain: Built by cilia