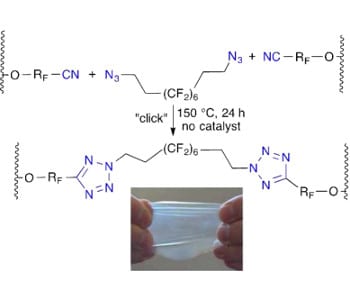 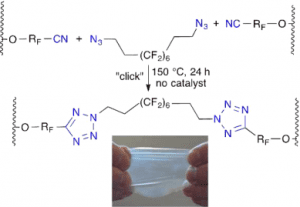 Fluoroelastomers are widely used in many applications including coatings, surfactants, membranes for fuel cells, binders and separators for lithium ion batteries, wires and cables, seals and gaskets under harsh conditions due to their broad chemical resistance even at high temperatures. On the other hand, traditional curing strategies for fluoroelestomers usually involve crosslinking of cure site monomers with toxic bisamines or bisphenols or peroxides and trienes , which may also lower their performance.

For Bruno Améduri at Institute Charles Gerhardt , Montpellier, France, and his team, it has been a two-decade quest in search for suitable copolymerization partners to acheive original startegies of fluoropolymers and their crosslinking. Thus, in collaboration with Dupont Performance Elastomers, the team has reported a simple yet novel approach to crosslinked fluoroelestomers using the azide-nitrile cycloaddition ‘click’ reaction, one type of the Huisgen 1,3-dipolar cycloaddition.

The ‘click’ crosslinking concept was initially conceived and adapted by the group in 2010, when they first published the azide–alkyne approach, which, however, raised problems with side product formation (e.g. from the known Glazer coupling). Taking advantage of the free nitrile group in DuPont Kalrez, a terpolymer based on tetrafluoroethylene (TFE), perfluoro(methyl vinyl ether) (PMVE), and perfluoro(8-cyano-5-methyl-3,6-dioxaoct-1-ene) (8-CNVE), the researchers use a fluorinated telechelic bis-azido curative to crosslink TFE/PMVE/8-CNVE polymeric chains through the formation of tetrazoles.

The new ‘click’-crosslinked perfluoroelastomer shows better thermal stability compared to its uncured counterpart. More importantly, the structure of bis-azido crosslinkers is readily tunable, which thus allows for flexible and diverse control over physical and chemical properties of the final products. The authors plan to further extend it into a new method for “reversible crosslinking under stimuli”, as well as “fluorofunctional copolymers for fuel cell membranes”.