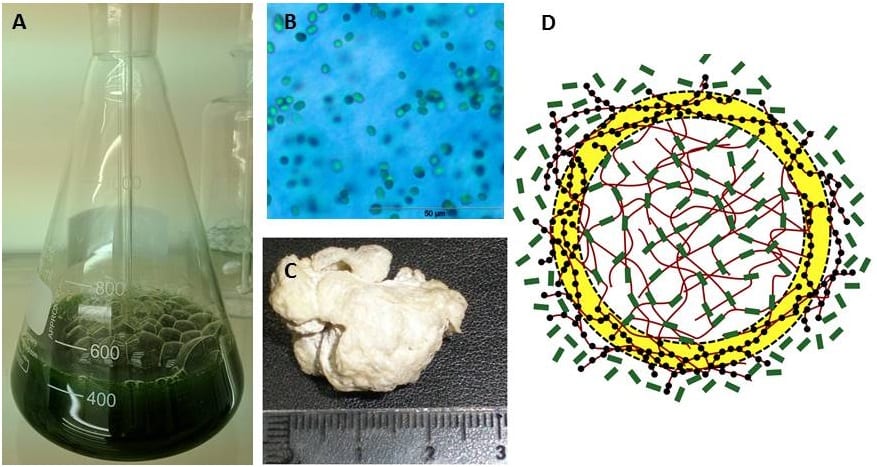 As an alternative to the traditional clinical practice of administering non-specific drugs, we are witnessing an interest in shifting to more directed treatments. In that regard, proteins are excellent candidates, as they are highly specialized agents with multiple functions, like transport and catalysis. However, some of their features turn into drawbacks when human administration is considered; for example, low circulating stability and/or solubility and possible triggering of immune responses. To avoid these problems, scaffolds are an excellent option, e.g. the widespread and natural-derived hydrogel-based polysaccharides, chitosan and alginate. Nevertheless, they might trigger immune responses and lead to long-term exposure toxicity problems.

In this context, José P. Leite, Rita Mota and co-workers from Instituto de Investigação e Inovação em Saúde (I3S, Porto, Portugal) have studied the use of a released polysaccharidic polymer (RPS) produced by the unicellular cyanobacterium Cyanothece sp. CCY 0110 as an alternative to the currently available scaffolds. This cyanobacterial strain not only has low requirements for culture maintenance, but also produces high amounts of polymer, easy to extract and recover. All these features make this RPS very attractive from an economic point of view.

In their recent article in Macromolecular Bioscience, the authors have demonstrated that this polymer is biocompatible, and notably they were able to delay macromolecule release kinetics by adding calcium to the polymer-macromolecular complex. The polymeric scaffold was proven to be inert and did not interfere with the active principle (i.e. proteins). Finally, it was assessed that the polymer forms a soft-gel structure when in contact with proteins, such as lysozyme or bovine serum albumin. This feature may lead to even further applications, like a three-component system for drug delivery or a matrix for in vitro cell cultures.