Minute fossils from the depths: Deep life on Earth thrives, is fossilized, and may help us identify life elsewhere. 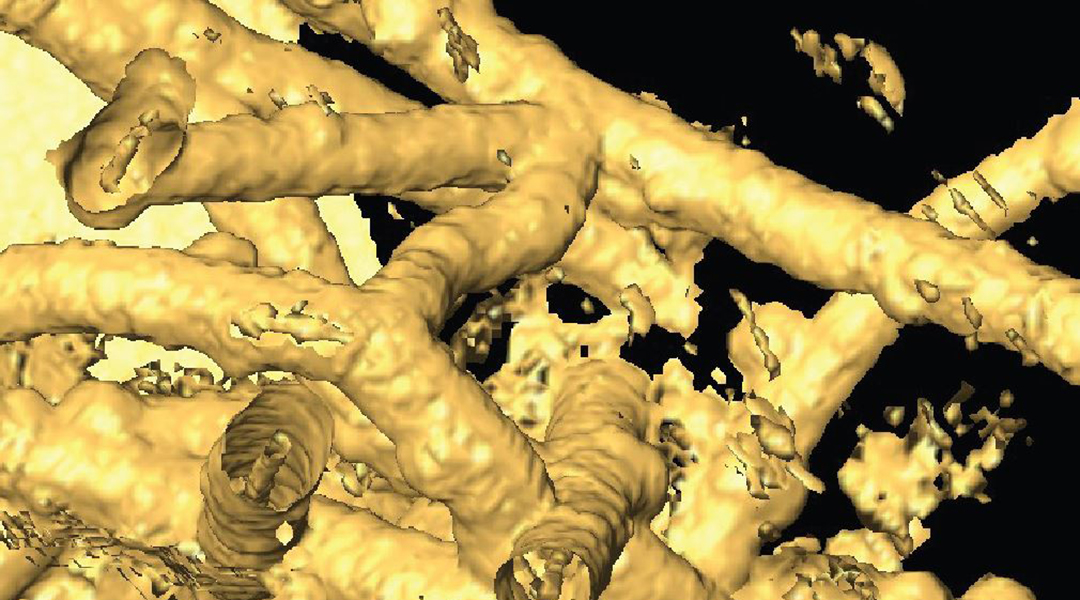 The Earth’s crust is anything but a composite of inorganic mineral deposits. We are aware of this when we see beautiful strata exposed by weathering, revealing marine fossils from an ancient sea bed. But there’s much more living in the sediment, even many meters below the sea bed—and that at extraordinary depths (e.g., 10 000 meters) where the pressure exceeds 1000 atmospheres.

We might expect some of this life to be fossilized in due course, even if it’s mostly microorganisms: fossilized colonial structures formed by ancient cyanobacteria (stromatoliths) have been found in many locations. There certainly seem to be enough microbes living in the deep; analyses of benthic (sea bed) sediments from across the globe suggest that around half of the microbes in our oceans live in the sea floor.

Even more astoundingly, it’s been estimated that such deep sea microbes make up between 50 and 80% and upwards of the total microbial biomass on Earth—and possibly as much as 30% of its entire living biomass!

Most of these microbes are bacteria and archaea, and life for them in this oxygen-starved, cold, dark, and high-pressure world is slow, really slow.

To give you an idea, the electron transport chain (ETC) of these organisms (the “energy machine” of the cell) works at least 10 000 times slower than the ETC of surface sediment microorganisms, and their division times are even slower; ranging from 100s to 1000s of years. But their environment is very stable, providing an ecological advantage, and slowly does it.

This enormous hidden biosphere and “palaeosphere” potentially hold enormous sources of knowledge on how the Earth and its life evolved, billions of years ago, and an article in BioEssays by Sean McMahon, from the University of Edinburgh, and Magnus Ivarsson, from the University of Southern Denmark and Swedish Museum of Natural History, give us a glimpse of what’s in store.

The habitable region (green) of the Earth’s crust with estimated biomass in the oceanic basement, marine sediment, and continents. The lower depth limit (dashed line) is determined by temperature, which increases more rapidly with depth beneath the oceans than beneath the continents. 1 GtC = 1015 g carbon.

And it’s not all microbial: the bacteria-eating nematode worm Caenorhabditis elegans—so beloved as a model organism for studying a variety of multi-cellular organismal features—has many cousins (that also eat bacteria) living deep within Earth’s rocks: in 2011 researchers found nematodes living in microscopic fissures and stalactites in mines and natural caves; since then, they’ve also been found in ocean abyssal soft sediment.

Sediment ultimately becomes rock, and advances in sampling and tomography (3D image reconstruction) have enabled researchers to resolve structures that are highly likely to be fossilized microorganisms, as McMahon and Ivarsson explain.

One of the most tantalizing prospects from this research is that of identifying the traces of life, or even extant life, on other planets in the solar system, probably deep below the surface. This might seem like a bet against extreme odds (extremely small!); however, life on Earth is found at many extremes, and many combined extremes (of temperature, pressure, salinity etc.).

Moreover, latest theories on the evolution of the first life on Earth suggest that life even originated in such extremes; namely in inorganic alkaline hot vents deep on the sea floor. Research in palaeobiology helps us greatly in understanding the “normality” of what we humans consider extremes in the context of the origin and flourishing of life forms. It seems set to contribute in major ways to astrobiology, and in the meantime it is illuminating a world of hitherto hidden evolution and ecology on Earth.

If life started in the deep, it certainly took root, and it continues there to this day, in impressive numbers and diversity.

Possibly elsewhere in our solar system too.