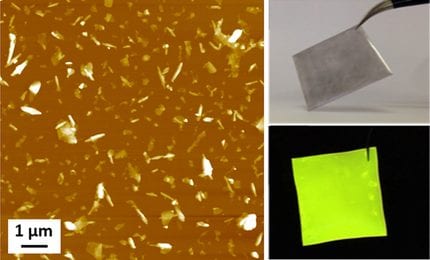 Graphene continues to be of great interest because of its outstanding electrical, mechanical, thermal, and optical properties. In view of their high surface-to-volume ratio, graphene-based materials (GRMs) are particularly appealing as nanofillers in polymer nanocomposites, especially for structural applications in the aerospace and automotive industries, and in sports equipment; this is confirmed by the increasing number of final products on the market containing graphene-based composites.

The industrial-scale production of GRMs relies on ultrasound-induced liquid-phase exfoliation of graphite into graphene sheets. Although this approach is cost-effective, there is still room for improvement and the market penetration of GRMs as an advanced material is still limited.

A multidisciplinary group led by Andrea Liscio at CNR, Bolgna, Italy, has reported in ChemPlusChem that adding aromatic surfactants, such aromatic perylene diimide (PDI) dyes, promotes the exfoliation of few-layers graphene nanosheets in low-boiling organic solvents. It is thought that the PDI molecules physisorb on the surface of the graphene flakes and stabilize them in solution. Given that the surfactants used—-PDI dyes—-already serve as polymer additives, the process described may be compatible with large-scale application in the polymer industry. The composite materials obtained in this way can be included in a straightforward way in elastomer or thermoplastic materials rendering them conductive.