Even without a brain, metal-eating robots can still search for food

The “metal-eating” robot can follow a metal path without using a computer or needing a battery. 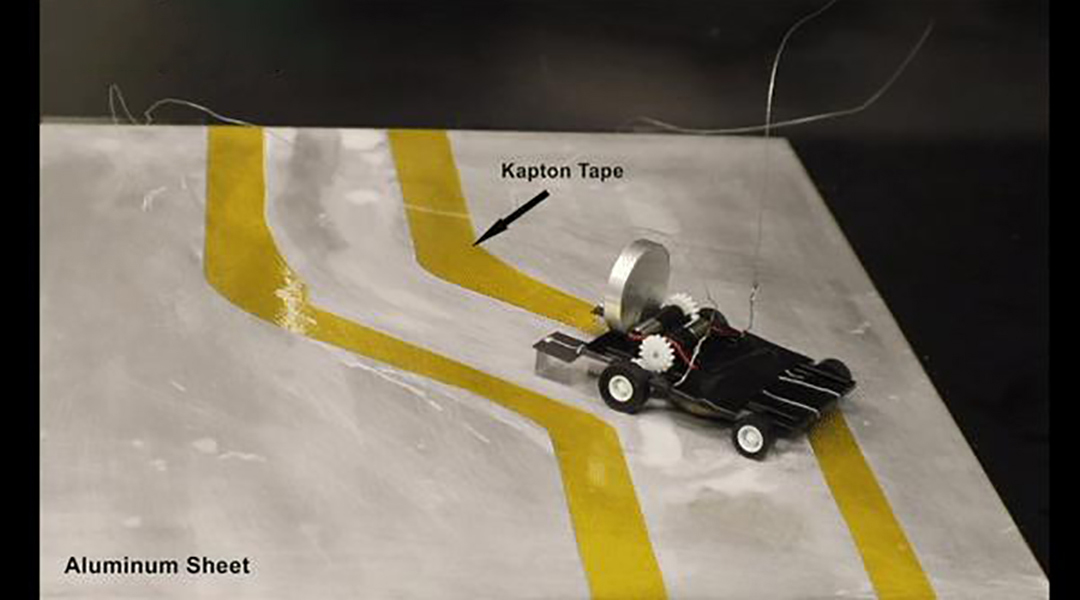 When it comes to powering mobile robots, batteries present a problematic paradox: the more energy they contain, the more they weigh, and thus the more energy the robot needs to move. Energy harvesters, like solar panels, might work for some applications, but they don’t deliver power quickly or consistently enough for sustained travel.

James Pikul, assistant professor in Penn Engineering’s Department of Mechanical Engineering and Applied Mechanics, is developing robot-powering technology that has the best of both worlds. His environmentally controlled voltage source, or ECVS, works like a battery, in that the energy is produced by repeatedly breaking and forming chemical bonds, but it escapes the weight paradox by finding those chemical bonds in the robot’s environment, like a harvester. While in contact with a metal surface, an ECVS unit catalyzes an oxidation reaction with the surrounding air, powering the robot with the freed electrons.

Pikul’s approach was inspired by how animals power themselves through foraging for chemical bonds in the form of food. And like a simple organism, these ECVS-powered robots are now capable of searching for their own food sources despite lacking a “brain.”

In a new study published as an Editor’s Choice article in Advanced Intelligent Systems, Pikul, along with lab members Min Wang and Yue Gao, demonstrate a wheeled robot that can navigate its environment without a computer. By having the left and right wheels of the robot powered by different ECVS units, they show a rudimentary form of navigation and foraging, where the robot will automatically steer toward metallic surfaces it can “eat.”

Their study also outlines more complicated behavior that can be achieved without a central processor. With different spatial and sequential arrangements of ECVS units, a robot can perform a variety of logical operations based on the presence or absence of its food source.

“Bacteria are able to autonomously navigate toward nutrients through a process called chemotaxis, where they sense and respond to changes in chemical concentrations,” Pikul says. “Small robots have similar constraints to microorganisms, since they can’t carry big batteries or complicated computers, so we wanted to explore how our ECVS technology could replicate that kind of behavior.”

In the researchers’ experiments, they placed their robot on aluminum surfaces capable of powering its ECVS units. By adding “hazards” that would prevent the robot from making contact with the metal, they showed how ECVS units could both get the robot moving and navigate it toward more energy-rich sources.

“In some ways,” Pikul said, “they are like a tongue in that they both sense and help digest energy.”

One type of hazard was a curving path of insulating tape. The researchers showed that the robot would autonomously follow the metal lane in between two lines of tape if its EVCS units were wired to the wheels on the opposite side. If the lane curved to the left, for example, the ECVS on the right side of the robot would begin to lose power first, slowing the robot’s left wheels and causing it to turn away from the hazard.

Another hazard took the form of a viscous insulating gel, which the robot could gradually wipe away by driving over it. Since the thickness of the gel was directly related to the amount of power the robot’s ECVS units could draw from the metal underneath it, the researchers were able to show that the robot’s turning radius was responsive to that sort of environmental signal.

By understanding the types of cues ECVS units can pick up, the researchers can devise different ways of incorporating them into the design of a robot in order to achieve the desired type of navigation.

“Wiring the ECVS units to opposite motors allows the robot to avoid the surfaces they don’t like,” said Pikul. “But when the ECVS units are in parallel to both motors, they operate like an ‘OR’ gate, in that they ignore chemical or physical changes that occur under just one power source.”

“We can use this sort of wiring to match biological preferences,” he said. “It’s important to be able to tell the difference between environments that are dangerous and need to be avoided, and ones that are just inconvenient and can be passed through if necessary.”

As ECVS technology evolves, they can be used to program even more complicated and responsive behaviors in autonomous, computerless robots. By matching the ECVS design to the environment that a robot needs to operate in, Pikul envisions tiny robots that crawl through rubble or other hazardous environments, getting sensors to critical locations while preserving themselves.

“If we have different ECVS that are tuned to different chemistries, we can have robots that avoid surfaces that are dangerous, but power through ones that stand in the way of an objective,” Pikul said.