980DP steel was studied using a new Thermal Desorption Spectroscopy apparatus to measure the hydrogen concentration in the DP steel, to evaluate the equivalent hydrogen fugacity, and to identify the trap activation energy and the associated hydrogen traps. 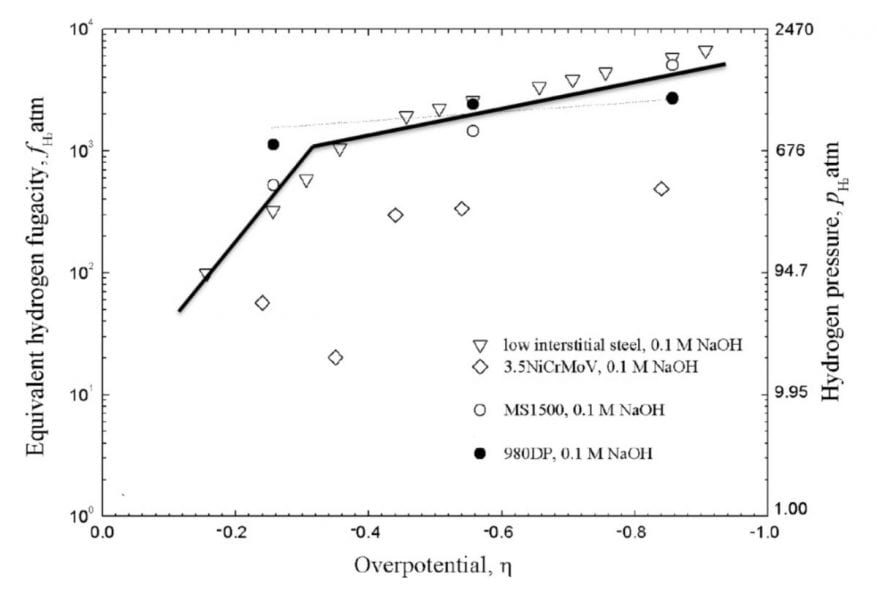 Due to their good combination of strength and ductility, good formability, and high energy absorption capability, Dual Phase (DP) steels have demonstrated the capability to fulfil the demands of improved safety and environmental friendliness by light-weighting, and have been widely used in the auto industry, since their first development in the 1980’s. DP steels find applications in the crumple zones (e.g. rear shock reinforcements and rear rails), and in the safety cage compartments (e.g. B-pillar and floor panel), of the car body. DP steels are exposed to hydrogen-producing environments during service due to corrosion of the car body, permitting hydrogen to be absorbed into the steels. This hydrogen, in combination with stress, could cause a deterioration of the steel mechanical properties, especially ductility. This phenomenon is called hydrogen embrittlement (HE). 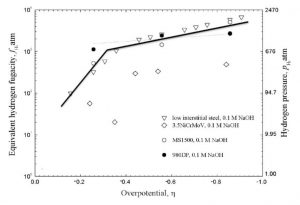 As part of their study of HE of these steels, 980DP steel was studied by Andrej Atrens et al. using a new Thermal Desorption Spectroscopy (TDS) apparatus to measure the hydrogen concentration in the DP steel subjected to hydrogen charging, to evaluate the equivalent hydrogen fugacity during electrochemical charging, and to identify the trap activation energy and the associated hydrogen traps.

The accompanying figure shows that, for charging in the 0.1M NaOH solution, the fugacity was similar for the (i) 980 DP steel (ii) low interstitial steel, and (iii) MS1500, and was greater than the fugacity for the 3.5NiCrMoV steel. This indicated an influence of steel chemistry, most likely, on the details of the hydrogen evolution reaction.