Equilibrium under pressure – the kinetics of iron-mediated ATRP 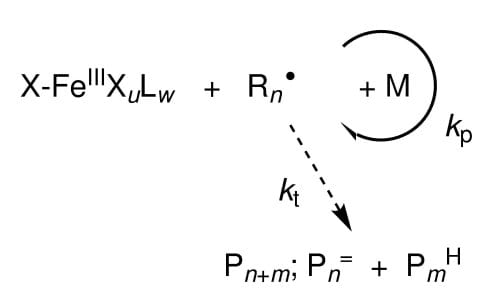 Reversible-deactivation radical polymerizations such as atom-transfer radical polymerization (ATRP) provide access to polymeric materials of narrow molar mass distribution with tailored chain length, architecture, topology, and functionality. Termination of radicals in ATRP is mostly overcome via reversible activation-deactivation mediated by a metal catalyst with the equilibrium being such that the deactivated “dormant” species is strongly favored.

The kinetics of Cu-catalyzed ATRP has been extensively studied so far. From an environmental and economic point of view, iron may be a promising alternative to copper because of broad availability and low toxicity.

In contrast to copper catalysis, iron-mediated ATRP may be carried out without adding specific ligands. Therefore, in their recent work H. Schroeder and M. Buback (Georg-August-University, Goettingen) together with K. Matyjaszewski (Carnegie Mellon University , Pittsburgh) have studied the kinetics of the Fe-mediated reaction both in different solvent environments and up to high pressures. 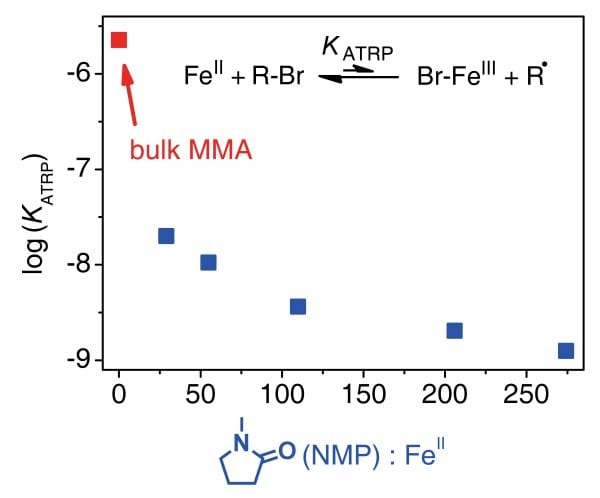 Activation-deactivation equilibrium constants, KATRP, have been measured for MMA polymerization and for monomer-free model systems by online VIS/NIR spectroscopy up to 2500 bar. Fe-mediated ATRP without ligands other than halide species or solvent molecules may be widely tuned by varying solvent environment, temperature and pressure. Absolute KATRP decreases by about three orders of magnitude in passing from MMA bulk polymerization to MMA polymerization in the presence of 92 mol% N-methylpyrrolidin-2-one (NMP) due to the formation of catalytically less active FeII/NMP species.

It is concluded that to allow for high-performance Fe-based ATRP, less polar solvents including the monomer MMA should be used.