Enhancing fertility by microfluidics and biophotonics

Lab-on-a-chip method, when combined with biophotonics, can be used to assay for metabolites, to separate gametes via optoelectrical tweezers, or to improve the vitrification of oocytes. 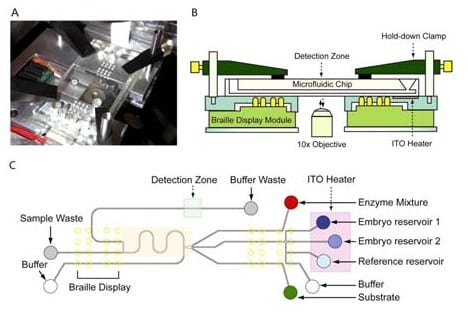 Lab-on-a-chip methods have proven to be a useful tool for enhancing non-invasive assisted reproductive technology. When combined with biophotonics, they can, for example, be used to assay for metabolites, to separate gametes via optoelectrical tweezers, or to improve the vitrification of oocytes.

With the benefits of automation, sensitivity and precision, microfluidics has enabled complex and otherwise tedious experiments. For cell culture applications, the small volumes of microfluidic devices can enhance autocrine effects. In addition, viscous forces dominate in microfluidic devices, causing laminar flow conditions. These small volume and laminar flow conditions are also interesting for non-invasive assisted reproductive technology (ART) as they can be utilized to more closely resemble in vivo conditions of insemination and embryo culture than classical in vitro methods using culture dish, test tube or drops of media. In a review article, David Lai, Gary D. Smith, and Shuichi Takayama from the University of Michigan (USA) give an overview on lab-on-a-chip (LOC) methods as a tool for enhancing non-invasive ART.

Non-invasive gamete and embryo assessment has largely been through periodic morpohological assessment using optical microscopy and early LOC ART was the same. Yet, morphological assessment is a poor indication of gamete or embryo health. So, more advanced biophotonics has emerged in LOC ART to assay for metabolites or gamete separation via optoelectrical tweezers.

A study using viability assessment such as implantation percentage and ongoing pregnancy as a primary outcome showed over 20% improvement by using dynamic microfluidic culture. The microfunnel architecture used provided accessibility of the oocytes in both insertion into and extraction from the device via simple pipetting. Such devices are capable of extracting media during culture through the outlet channel to prevent accumulation of toxic metabolic waste which may harm embryos.

Currently, the most successful treatment for male infertility is using intracytoplasmic sperm injection (ICSI) where oocytes are fertilized via direct injection of sperm. In this context, it is necessary to isolate the most viable sperm – a challenging task. Using microfluidic channels to produce mild, biomimetic sorting mechanism based on sperm motility avoids centrifugation reported to cause sublethal damage to sperm. A sorting device using laminar flow regime consists of multiple parallel streamlines. Dead sperm, nonmotile sperm and debris are simply carried by the streamline towards the waste reservoir. Motile sperm are able to swim across the streamlines into a secondary reservoir for extraction.

In cases of extreme male infertility, ICSI is still capable of producing live births with non-motile but live sperm. This requires extremely labor-intensive single sperm isolation, exposure to hypo-osmotic solutions and visualization of membrane swelling. Optoelectric tweezer have shown to be capable of non-invasive sperm sorting without introducing DNA damage: Due to a live cell’s ability and a dead cell’s inability to keep intact a charge gradient between its cytoplasm and extracellular microenvironment, they respond differently to an electric field. Live cells experience attractive forces toward regions of high electric field while dead or dying cells have no or repulsive forces to the electric field.

Like morphology assessment of spermatozoa, selection of mature oocytes is also often subjective. Among other techniques, optoelectric tweezers can be used to separate normal from abnormal oocytes, via the same mechanism as for sperm.

Vitrification is the transformation of a substance into glass and the vitrification of oocytes has recently been shown to be more successful than classical slow-freezing cryopreservation. It involves high concentrations of an anti-freeze substance – a highly hyperosmotic solution. Studies showed that using extra transfer steps with less change in concentration on each step decreases osmotic shock and increases cryopreservation quality but at the cost of practicability as the transfer of oocytes is delicate, prone to accidents and requires extensive training. With the precision and sensitivity afforded by microfluidics, LOC is capable of exposing oocytes to a continuous profile of gradually increasing CPA concentrations.

Embryo metabolism provides a much clearer indication of embryo health than morphology. For example, human blastocysts with the highest glucose uptake were correlated with the highest reproductive potential. The authors describe an automated, computer-controlled microfluidic device that was designed for continuous embryo culture with integrated spent media analysis on-chip.

The authors are convinced that the integration of broad spectrum metabolite analysis into LOC ART is an exciting future that merges automation and sensitivity with the already highly accurate and strong predictive power of biophotonics.