The important role of surface-bound hydroxy groups of vanadium catalysts under reaction conditions by employing in situ DRIFTS experiments and DFT calculations is elucidated. 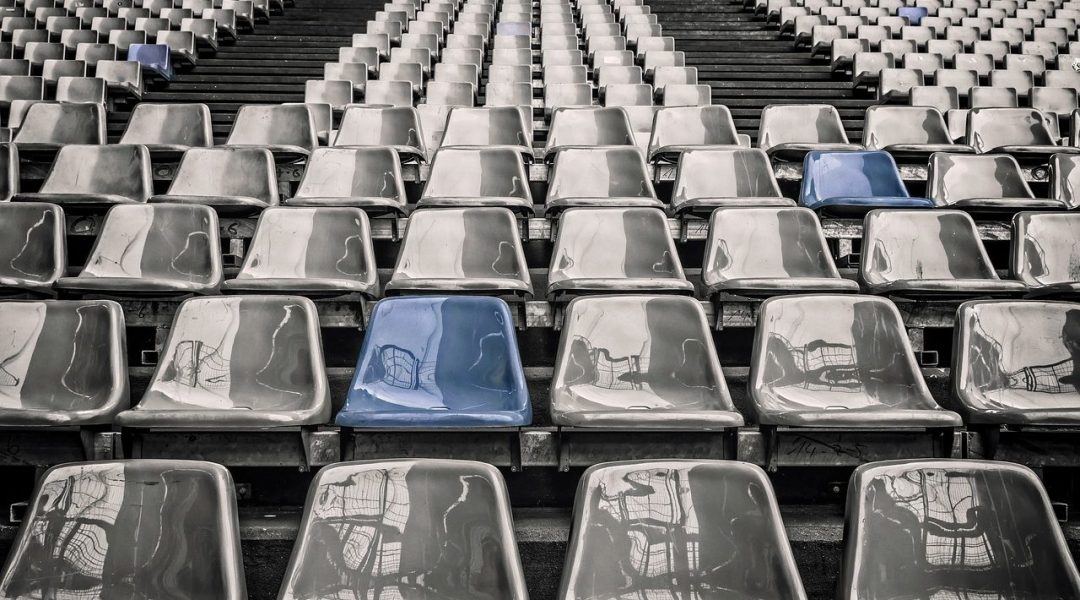 As one of the most important feedstocks in the chemical industry, propylene, is widely used for manufacturing various products such as polypropylene, propylene oxide, acrylonitrile and phenol. 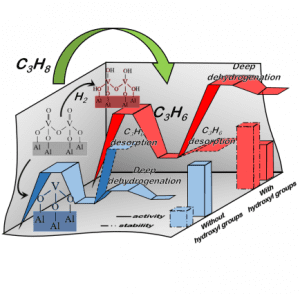 The recent shale gas boom has driven the price of propane down, which makes the propane dehydrogenation (PDH) process more commercially attractive for on-purpose propylene production.

Although Pd-based and Cr-based catalysts are widely used as a commercial catalyst for this process, the high price tag of Pd and highly toxic nature of Cr restricts their large-scale application. Supported vanadium oxides are one of the most promising alternative catalysts for PDH. However, due to the complexity of the surface structure and multi-valency of VOx, the nature of the active site and surface structure of the supported vanadium catalysts under reductive reaction conditions still remain elusive. 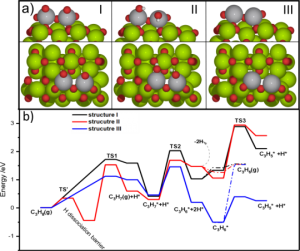 Prof. Jinlong Gong and his colleagues at Tianjin University have recently functionalized the surface structure, and looked at theimportant role of surface-bound hydroxy groups of VOx/γ-Al2O3 catalysts under reaction conditions by employing in situ DRIFTS experiments and DFT calculations.

The VOx/γ-Al2O3 catalyst was synthesized by a incipient wetness impregnation method. By applying different H2 pre-treatment time, the research team managed to tune the surface V-OH concentration. The catalytic test indicates that the initial activity and relative deactivation rate correlate linearly with the relative intensity of V-OH band representing the concentration of the hydroxy groups on the VOx species. 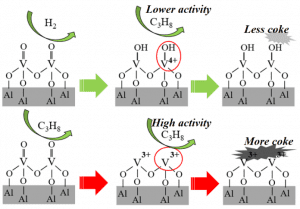 Gong’s group further performed DFT calculations to gain the atomic understanding of the reaction mechanism. The supported VOx was modeled by a dimer V2OxHy cluster, which is sufficient to represent the 2D polyvanadates. DFT calculation indicates that the existence of surface OH group hinders C-H activation, which is consistent with lower initial PDH activity. In the meantime, the presence of surface OH also weakens propylene adsorption, which is crucial for the high PDH selectivity. Although bare V3+ has higher C-H activation ability, its binds propylene too strong which induces further dehydrogenation to form coke.

Combining experimental and calculation study, the research team believe that the hydroxyl groups on the surface of vanadium oxide have a crucial role in PDH reactions, which provides inspiration for the further study of the structure-activity relationship of vanadium oxide.